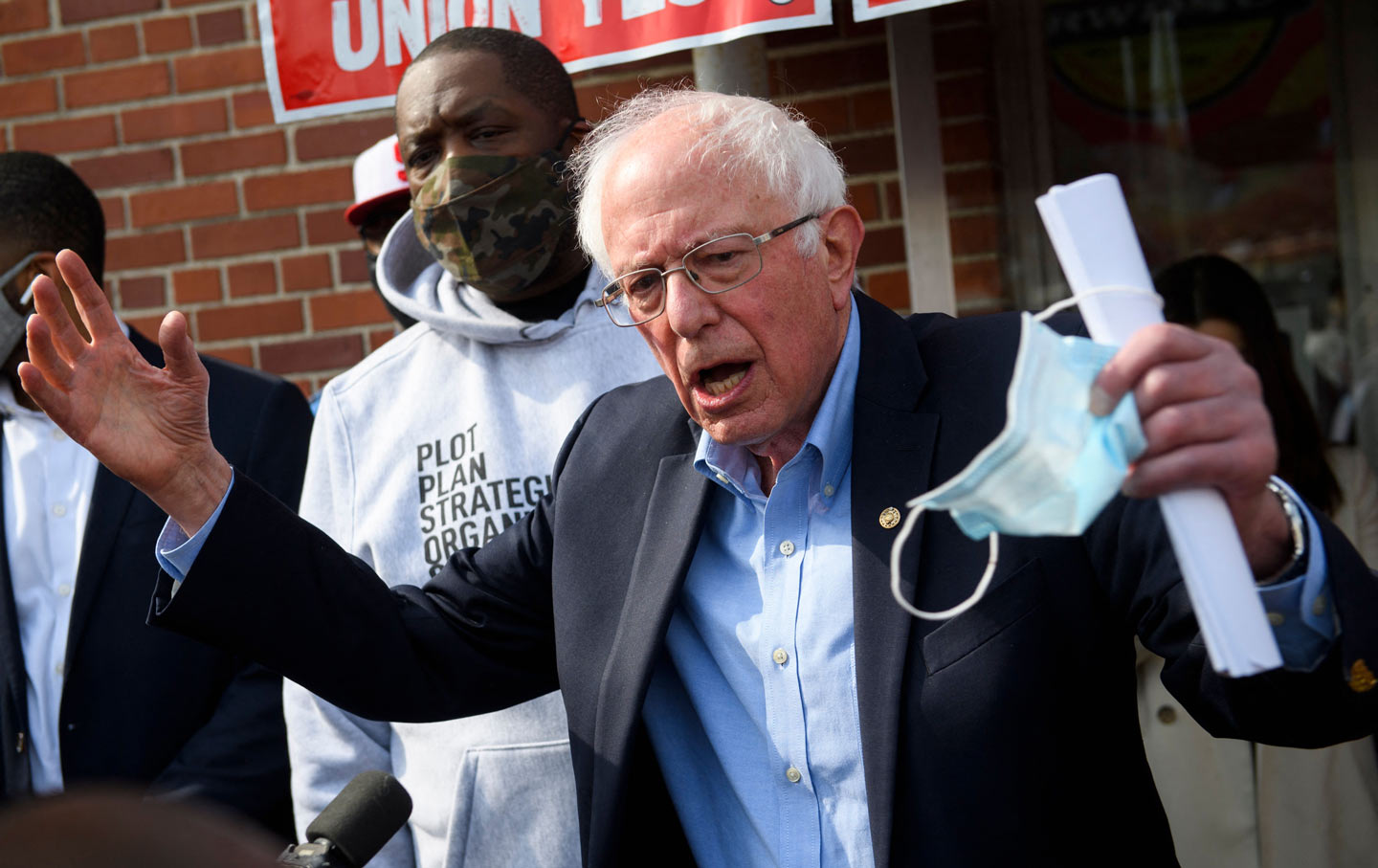 When Wisconsin Governor Scott Walker attacked labor unions a decade ago, tens of thousands of workers rallied in defense of the right to organize and collectively bargain. While many national Democrats were cautious about jumping into the fight, Bernie Sanders, the independent senator from Vermont, went all in with the workers and their unions.

“This is part of the concerted attack on the middle class and working families of this country by the very wealthiest people in America,” warned Sanders in 2011. Ripping into Walker, Ohio Governor John Kasich, and other anti-union Republicans, Sanders declared, “These guys want to return us to the 1920s when working people had virtually no rights to organize or to earn a decent living.”

With statements, media appearances, and trips to rally with union activists in Wisconsin over the long months of struggle, Sanders took every opportunity to show solidarity in 2011 and 2012. The senator wasn’t doing anything radical; he was displaying the basic level of solidarity that should be expected of prominent figures who say they are on the side of the working class.

But Sanders didn’t have a lot of company. Democrats were in power in Washington in 2011. Yet, as the Associated Press reported, “White House officials have stayed away from any trips to Madison, the state capital, or other states in the throes of union battles, despite urging by union leaders.” Headlines announced, “White House steering clear of union fray: Stakes are high as administration tiptoes around issue.”

Flash forward 10 years to the spring of 2021 and another labor struggle: the Retail Wholesale and Department Store Union’s historic organizing drive at the Amazon warehouse in Bessemer, Ala. Sanders was back on the front lines as the voting on whether to unionize, which concluded Monday, entered its final weekend. The senator arrived in Alabama Friday—with actor Danny Glover and rapper Killer Mike—and told workers, “If you pull this off here, believe me, workers all over this country are going to be saying, ‘if these people in Alabama could take on the wealthiest guy in the world, we can do it as well.’”

That was the right message, especially at a point when Amazon is throwing major roadblocks in the way of the organizing drive in a Southern “right-to-work” state. What was notable was that this time, Sanders was delivering the message along with a chorus that included President Joe Biden and a lot of other Democrats who were singing the praises of this particular organizing drive—and of a new wave of union activism.

Early in March, a delegation of House members, including newly elected Representative Jamaal Bowman (D-N.Y.), headed to Alabama. “I want Amazon workers across the country to pay attention because you should be doing the same thing in your workplace,” Bowman announced outside the RWDSU union hall in Birmingham. “And we’re not stopping with Amazon. This is Lyft, this is Uber, this is Walmart, this is Tesla—all the companies across this country that continue to be abusive and provide terrible work conditions for workers, we stand with you.”

In February, Senators Sherrod Brown (D-Ohio), Cory Booker (D-N.J.), Ron Wyden (D-Ore.), Bob Menendez (D-N.J.), Jeff Merkley (D-Ore.), Kirsten Gillibrand (D-N.Y.), Richard Blumenthal (D-Conn.), Tammy Baldwin (Wis.), Ed Markey (D-Mass.), Elizabeth Warren (D-Mass.), Chris Van Hollen (D-Md.), and Tina Smith (D-Minn.) joined Sanders in signing a letter supporting the organizing drive. They declared, “Amazon’s profits have soared by 70 percent over the last year, because of the hard work of your employees. They have put in long hours and risked their own health during the COVID-19 pandemic to meet increased demand, and they deserve to share in the success they have made possible. Amazon’s employees have the right to join together to bargain collectively for a voice in their workplace, and to vote to establish their rights to negotiate.”

A few weeks later, Biden released a video in which he said, “Workers in Alabama and all across America are voting whether to organize a union in their workplace. This is vitally important. The choice to join a union is up to the workers—full stop.”

That wasn’t quite the full-throated call to action that Sanders delivered in Alabama. But Biden’s message provided an indication of the extent to which Democrats have been abandoning the caution that characterized the party’s approach to union struggles after former President Bill Clinton and the Wall Street–friendly “New Democrats” pushed the party in a neoliberal direction in the 1990s. Unions kept backing Democrats at election time in the 1990s and 2000s. But elected Democrats frequently broke with labor on trade policy, failed to deliver reforms that would make it easier to organize unions, and often seemed to be more interested in raising money in Silicon Valley than in walking picket lines in factory towns.

Then came the “Sanders for President” campaign of 2016. Previous Democratic candidates had talked about solidarity—Barack Obama even suggested in 2007 that he might, as president, “put on a comfortable pair of shoes myself (and) walk on that picket line with you.” But Sanders practiced it. In Iowa, in the summer of 2015, he arrived at a mill in Cedar Rapids, where members of Bakery, Confectionery, Tobacco Workers and Grain Millers’ International Union Local 100G were picketing for a new contract. The senator grabbed a picket sign and joined the line. He kept showing up for strikes—most notably, when 40,000 Verizon workers went out in the spring of 2016—and speaking up for organizing drives.

Sanders never toned it down. He never adopted a cautious stance when it came to backing unions. He kept calling out corporations, demanding wage hikes, and decrying “oligarchy” and “plutocracy.” The senator’s militancy struck a nerve. Voters liked seeing a serious contender for the presidency on picket lines. It was clear that Americans—especially young people, and working-class people of all backgrounds—were ready for a more passionately pro-labor politics.

In 2018, veterans of the Sanders campaign, including New York Representative Alexandria Ocasio-Cortez, started running for and winning breakthrough races for House seats as outspoken advocates for worker rights. They joined labor stalwarts such as Wisconsin Representative Mark Pocan, a veteran of the 2011 uprising, Michigan Representative Andy Levin, a former Service Employees International Union organizer, to form a cadre of unapologetically pro-labor Democrats who used their political platforms to endorse union organizing drives and strikes. By the time the 2020 presidential campaign rolled around, labor solidarity was becoming the standard line for prominent Democrats, and it’s even more so in 2021 as the Amazon vote approaches.

The question, of course, is whether Biden and Democrat senators are ready to take the next essential step and enact the Protecting the Right to Organize (PRO) Act with its protections for workers seeking to organize. That will require a willingness to choose the side of the working class over archaic Senate rules—a real show of solidarity.

For his part, Sanders argues that if barriers to organizing are removed, the workers and the unions are ready.

“I think there is an excellent chance that what we will see are more workers trying to get into unions and workers who are in unions today becoming more militant,” he explained when we talked about the impact of the pandemic and the economic turbulence associated with it. “I think, given the disparities of income and the fact that so many workers are working for starvation wages, I think we will see an increase in the number of people who want to join unions and the militancy of those people who today are in unions.”

How do we remember a prophet

After the Capitol riot, Republicans need to atone for spreading Trump’s lies

Sen. Gloria dumped travel stock before the ACE Travel Ban to the US from Europe