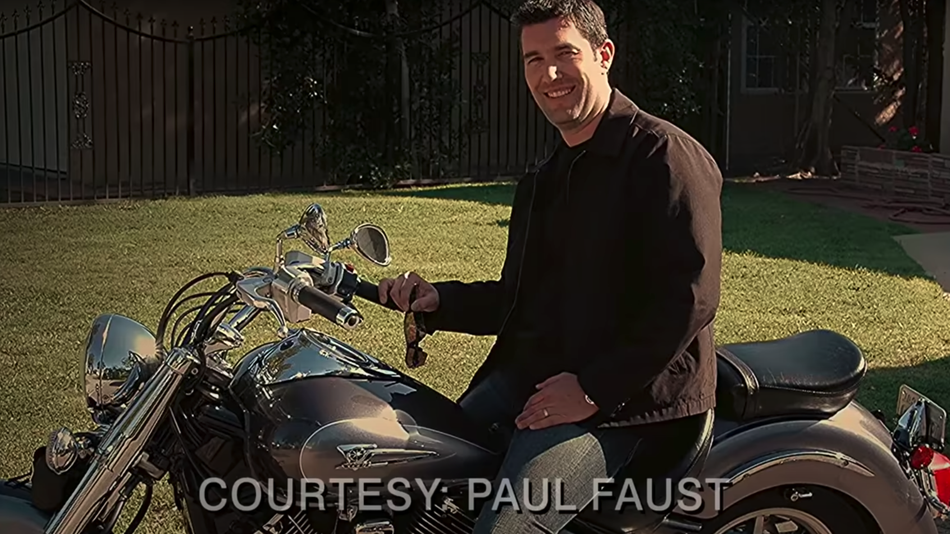 Many people think Jim Halpert is the coolest guy on The Office, but those fans are clearly forgetting about Paul Faust, aka Cool Guy Paul, one of the bosses of Scranton Business Park’s five families.

In the Season 4 episode, “Chair Model,” Kevin explains that Paul Faust is the boss at Disaster Kits Limited, and calls on Michael to arrange a meeting with Faust, Bob Vance of Vance Refrigeration, WB Jones of WB Jones Heating and Air, and Bill Kress of Kress Tool and Dye. In Kevin’s mind, assembling the five business park families is the only way to solve a major issue with parking, and you know what? Kevin was not wrong.

Anyway, on the latest episode of the Jenna Fischer and Angela Kinsey chatted all about the “Chair Model” episode and spoke with real life man, Paul Faust, who unexpectedly wound up playing himself on the show after a visit to set.

As Fischer explained, the way Faust landed a cameo on the show was truly “bonkers,” so grab some popcorn and get ready to learn how he became this Cool Guy character.

From set to screen: The tale of two Paul Fausts

“This is an amazing story, and it all starts when an actual man named Paul Faust came to visit the set of The Office,” Fischer began.

Kinsey, who’s known Faust for years and used to be related to him by marriage, reached out to get the full scoop from the Cool Guy himself, and here’s what he had to say.

“So I was out in LA on business and decided to visit the set because my cousins are part of The Office. And when I was out there I met the writers, and I kind of told them one of my companies and what I did, which was a company that sells disaster kits,” Faust explained .”And Greg (Daniels) said, ‘This is my cousin. He’s a little nuts. Tell them what you do.’ I told them about the company. And when I walked out of the room, unbeknownst to me, B.J. Novak said, ‘That guy’s got to be a character on the show.'”

For those who don’t know, Novak wrote the “Chair Model” episode, and was able to craft a part based on Faust. The only issue was, they didn’t cast the part in time.

“The day before they shot the scene they hadn’t found an actor to play the part,” the real Faust explained. “So I got a call asking me if I wanted to audition to play the part. And long story short, I got the part, got to fly out and be part of the awesome show, and played myself. So that’s how I got to be on the on the show — it’s really a story that only can happen in Hollywood.”

After hearing Faust’s audition story, both Fischer and Kinsey were blown away.

“I mean, that’s bonkers,” Fischer said. “He’s literally playing himself, but what’s bonkers to me about it was that they did hold auditions. They held auditions for this role. And the night before, they just had not found someone who could play Paul Faust. So they’re like, ‘How about Paul Faust?'”

Kinsey went on to marvel over the fact that real Faust, like the character, really does sells disaster kits. “That’s real. That is his company,” Kinsey said.

“I think one of the most unique things about me being in The Office was that I actually played myself. When I went out to LA and I was listening and I went to the set, I talked about one of the businesses I run, which is a company called 1800prepare.com, where we actually sell disaster kits and preparedness kits,” Faust said.

“So I talked about it, and that’s what BJ had picked up on. And so he wrote a part called about Cool Guy Paul, the owner of Disaster Kits Limited. And yes, I still own that company. We still sell disaster kits. So I think I’m one of the few people who played himself on TV with his real name in a real business that he runs, which was kind of cool,” he continued.

Was that really Paul’s motorcycle?

Cool Guy Paul wouldn’t be so cool without that photo of him posing on a motorcycle, but Real Faust wants to clear things up and let fans know it wasn’t his bike.

“I believe it was the motorcycle of one of the camera guys. He happens to ride motorcycles. So he brought his motorcycle around. I sat on it. We took a bunch of pictures and that just became the shot associated with Cool Guy Paul,” Faust explained.

Faust wasn’t actually an actor, which makes his performance even more impressive, but being a fan of the show meant that being on set was a little stressful.

“I’m so honored to be a small little part of The Office.”

“I remember the first time we were about to shoot, they say, ‘OK, quiet on the set. Cameras rolling.’ And I will never forget it but Brian says, ‘OK, nobody eff up, Paul.’ And he looks at me, and, you know, he was messing around, but it was so funny. And then the entire time we shot the scene, I had my lines to say, but we shot it about 20 or 30 times. And every single time, Brian and Ed said different things. And I happen to think they’re super funny. And it was very hard to keep a straight face. I never knew what was going to come out of their mouths,” Faust explained. “They were making faces at me, trying to get me to laugh, and I had to sit there and be dead serious. I didn’t want to be the guy to mess up the scene.”

“So working with people who were literally comic geniuses in their delivery and their timing and having to sit there and being the new guy on set and trying to keep a straight face and not to mess up was a challenge,” he explained. “But such a life experience and just so funny to do. And I’m so honored to be a small little part of The Office.”

Be sure to listen to the full podcast episode for more behind-the-scenes stories about “Chair Model” and Paul Faust’s experience on set.

You can and follow along with the podcast every week on , , or .

The best war movies on Netflix