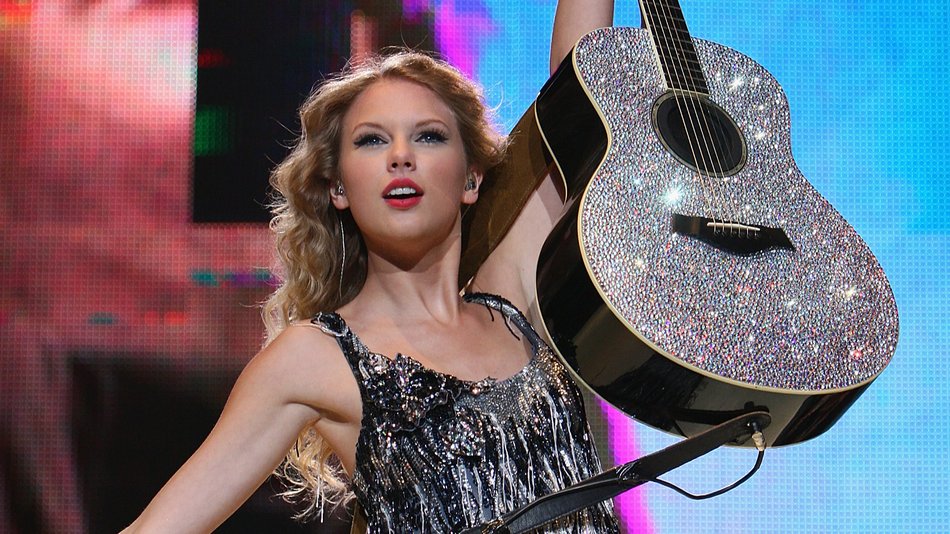 Taylor Swift’s entirely re-recorded and replicated version of Fearless is here, along with lyric videos for every single song. What a time to be a fan and not Scooter Braun.

Swift’s second album originally released in 2008, Fearless (Taylor’s Version) is the very first release in the superstar’s ambitious project to revisit and record her back catalogue. The masters for Swift’s first six albums — from her self-titled debut in 2006 to reputation in 2017 — recorded under contract with her former label Big Machine Records were bought by former manager Braun for $300 million, then sold to a private equity firm for a similar amount. Swift said she wasn’t given the opportunity to buy them herself, accused Braun of “incessant, manipulative bullying,” and in a powerful Tumblr post in 2019 she wrote, “You deserve to own the art you make.”

Released Thursday, Fearless (Taylor’s Version) is almost a perfect copy of the original album, faithfully re-recorded and produced by Jack Antonoff, Christopher Rowe, and Aaron Dessner down to the giggle in “Hey Stephen,” and released with some new material in an ongoing rarities series that Swift is calling “From the Vault.”

Brimming with country pop crossover gems and messy relationship ballads, Fearless featured five singles — “Love Story,” “You Belong with Me,” “White Horse,” “Fifteen,” and title track “Fearless,” — and won Swift won Album of the Year at the 2010 Grammys (at the time it made her the youngest person ever to win the award; it’s now Billie Eilish).

I’m counting down the minutes til we can all jump into this brave world together, filled with equal parts nostalgia and brand newness.

And now, you can revisit them all in one of the most noble artforms on YouTube: lyric videos. You know them, the overtly cheesy alternatives to actual music videos that somehow get away with their supreme corniness because we just want to be able to sing along with the track. And because Swift released so many of them, we thought we’d rank them, from least best to absolute best (they’re all an absolute treat because uh, it’s Fearless).

And every single time you see the words “Taylor’s Version” at the top of these videos, send big high five energy her way. She did it.

Tell me why this particular lyric video is wielding a pulse monitor for a background in this supremely fierce song. Ohhh, that’s right “I need you like a heartbeat,” OK, cool cool cool. There are better ones coming, folks!

This is the first and last time Taylor will drive this way again, so we’ve got a rusty old car dashboard, thoughtful cursive font, and what looks like an extremely early Instagram filter. Both channel that big nostalgic farewell vibe for “Bye Bye Baby,” one of the six album tracks “From the Vault.”

We’ve got rain, we’ve got pavement, we’ve got rain on pavement. Even the words drop into place like rain. Another one “From the Vault,” featuring Maren Morris, this lyric video really spells it out.

The cosy cafe vibe on the devastating “Don’t You,” is as good a location to run into your ex as any, we guess. One coffee cup? Two wooden bar stools? This “From the Vault” song was already a heart-punch, but those lyrics zooming slowly into our hearts and out of our tearducts is too much.

The lyric video for “That’s When,” a Keith Urban duet “From the Vault,” sits you on a road in the middle of a misty country property and leaves you there, with only lyrics of a crumbling relationship to keep you company. This is a bit of a treat, though, being a new recording for Swift fans — it was written early in her career with the Warren Brothers, and Urban not only appears on this recording but another Fearless Vault gem “We Were Happy.”

It’s a kaleidoscopic roll into whimsical circus tent town for “We Were Happy,” one “From the Vault,” with Keith Urban jumping back in on those backing vocals. Though the lyrics do hand over the majority of real estate to the ambiguous tents, that syndicated color coding and slight fog make this a pretty one.

Do your own version of Chandler and Joey’s sad window gazing with the lyric video for “Come In With the Rain,” a literal open window on a rainy night, that appears to be located somewhere in David Lynch’s Red Room. Sadly no one appears.

Don’t we all miss screaming and fighting and kissing in the rain? That antique clock and those onscreen lyrics tick furiously along in “The Way I Loved You,” Swift’s major marching singalong testament to the rollercoaster ride of teen love. If you’ve ever done a speed-reading exercise, this is basically the same vibe.

Big Folklore vibes on the lyric video for deception power ballad “You’re Not Sorry,” which sits on a high perch over a misty landscape on a rainy day. It’s the kind of view I’d personally like to scream this song into, so they nailed it.

It’s a horse! Yes, it comes back a few times, but in this lyric video for the second official single from Fearless, you will spend the four-minute runtime waiting for ol’ mate to come galloping through.

Dive into the lyric video for “Breathe” which moves from a slightly troubling underwater situation, hits the surface for a literal breath at the chorus, then ends up in the clouds for the bridge. Every time that sans serif font widens and zooms, I feel like I’m using the Headspace app. Added bonus: lovely old photo of Swift and her duet partner Colbie Caillat.

Who is this headless man who’s apparently “perfectly fine”? Where did all this smoke come from? All possible Joe Jonas association and Sophie Turner Instagram banter aside, this is a truly classy lyric video for another one “From the Vault” as Swift’s casually catchy lyrics zoom forward through the misty, moodily-lit room.

11. The Other Side of the Door

Double the font for the double the harmonies on big messy relationship ballad “The Other Side of the Door,” paired with a montage of black and white on and offstage photos of Swift. Flashing the words “back over” for effect gets major pebble-throwing points here.

This glorious anthem of transience comes served with plenty of onstage photos from the 2009 Fearless tour. If you didn’t get the song’s core message, we refer you to the insistently tiled background.

Literal jump, then fall, into the ocean for this big uplifting track — multiple times. Holiday snaps of Swift are combined with sunny coastlines, very literal waterfalls, and dramatically swishy font animations for this sweet tale of throwing everything you’ve got into a new something.

7. Today Was a Fairytale

Plenty of nostalgic Taylor photos in this one, duplicated with various filters. Big surprise-birthday-presentation-by-your-friends iMovie vibes

Equal parts personal selfie montage and live concert footage in “Hey Stephen.” Love this serif font with those little raised rogue letters here and there, what fun! It has Swifties trying to decode it as a secret message and everything. But really, this is so high up because there’s a dog and a cat in it.

It’s the title track folks, and it already has a music video, so this one doesn’t need much embellishment — all we need is those feeeeearless lyrics to sing at the top of our lungs. A static, mid-hair-flick image of Swift combined with handfuls of gold glitter and faux concert lights in slow motion. Extra points for giving “capture it, remember it” their own pops. Classy.

4. You Belong With Me

OK, these two are a pair, with a similar static concert photo/hovering glitter treatment and its already existing iconic music video. For all its not-very-2021 lyrics, this one gets the points for the delightful home footage of Swift dancing in her kitchen, the absolute shade of the shaking animation on the notably capitalized “SHE’S UPSET,” and the well…slightly menacing zoom on the italicized “like I do.” 👀

Awwww BFFs! Being written about first dates, heartbreak, and friendship in her freshman year of high school, the lyric video for huge Fearless single “Fifteen” is a slideshow of goofy and sweet old photos from the time, many of which feature Swift’s bestie Abigail Anderson — “You sit in class next to a redhead named Abigail/ And soon enough you’re best friends.” Call me on that supremely pink Motorola i833 Baby Phat and tell me all about this lyric video, because it is excellent.

In a pretty special video, “The Best Day” features a treasure trove of home footage from Swift’s childhood. She wrote the song for her mother, Andrea, who features in the videos (and who has been through a hell of a time recently). “‘The Best Day’ is a song that I wrote without telling my mom,” Swift said at the time. “I wrote it in the summertime, and I recorded it secretly, too. I had this idea that I wanted to play it for her for Christmas. So when I got the track, I synced up all of these home videos from when I was a little kid to go along with the song like a music video, and played it for her on Christmas Eve and she was crying her eyes out.” This footage was in the video Swift released herself, but it’s made even more emotional with the lyrics sitting right beside it.

Of course! Swift’s signature “Rom-eo take me” young romance anthem comes with a genuinely sweet, extremely ’00s tribute to Fearless fans. This is the ultimate thank you to Swifties, going beyond the static lyric video and presenting a shoebox full of memories from her time touring and taking pics with fans. Big heart explosion here.

How to master the virtual samurai ways