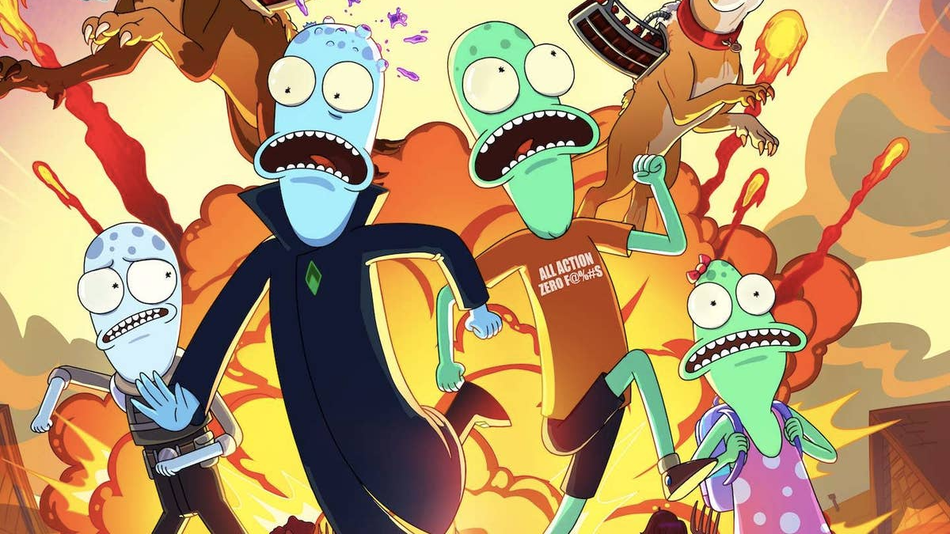 Solar Opposites, spearheaded by Rick and Morty co-creator Justin Roiland, always had an uphill battle to climb: The inevitable, constant comparison to one of the most fanatically beloved and critically acclaimed animated shows of all time.

It’s a testament to the talent behind the scenes that Season 1 managed to be so promising, distinct yet of a piece enough with the Rick and Morty oeuvre to please fans and critics alike.

Still, Hulu’s Solar Opposites couldn’t avoid coming off as kind of diet, “pretty good” Rick and Morty. Great, but in the context of an impossible standard, not as revolutionary or impeccable as the Adult Swim show that permanently changed the game for adult animated TV. The first season’s 78 percent Rotten Tomatoes audience rating (while far from a precise metric) captured the positive yet slightly unconvinced fandom which gave four seasons of Rick and Morty a 93 percent average.

Season 2 transforms the little spin-off-that-could underdog into a bona fide juggernaut in its own right.

But Solar Opposite’s recently released Season 2 transforms the little spin-off-that-could underdog into a bona fide juggernaut in its own right, raising audience enthusiasm up to 92 percent. At the risk of only perpetuating the unfair comparison, the eight new episodes achieve a Rick and Morty level of greatness that previously eluded Season 1 by finally diverging from its predecessor in a big way.

For a quick recap, Solar Opposites is about two alien Schlorpians and their “replicants” (or, in human terms, children) who escaped their dying planet only to crash land on Earth. The two took very different approaches to assimilation, with Korvo (voiced by Roiland) remaining staunchly focused on the mission to find a new unpopulated planet to rebuild their society, while Terry (voiced by Silicon Valley‘s Thomas Middleditch, who it’s worth noting has recently been implicated in multiple sexual misconduct allegations) mostly just enjoys the worst pop culture our planet has to offer.

Out the gate, Episode 1 makes clear that Roiland’s show has finally found its own individual voice, stride, and (most importantly) approach to storytelling. Instead of carrying over the stakes from last season’s cliffhanger like Rick and Morty would, it quite literally throws it in the garbage, before promptly moving on with no big overarching fundamental change to the characters or show world.

Last season, we left the Solar Opposites — the new meta nickname Terry gives their little alien family unit in Season 2 — after finally repairing their spaceship, and as they were preparing to leave Earth for a new planet. But thanks to Terry bringing along the full series run of Cops on DVD and VHS (among other trashy Earth relics), the added weight causes a failure to launch. So the show goes on with the same premise described in the intro sequence.

In contrast, Rick and Morty infamously thrives off painting itself into and (arguably taking too long to write itself out of) tight narrative corners from season to season. Just look at Season 3’s acclaimed premiere episode as an example, or every other season finale for that matter. Raising the stakes and evolving the story world and characters is fundamental to that show’s DNA.

So by Rick and Morty standards, Solar Opposites Season 2 commits a mortal storytelling sin: It unceremoniously abandons a hyped-up emotional stake, throwing it away with zero pay off after a full, season-long wait. Somehow, it pulls off this bait-and-switch flawlessly.

What this departure (or failure to depart, really) exemplifies is the season’s overall newfound confidence. Roiland and company are now clearly doing their own thing, and it deliberately flies in the face of the strict storytelling structure now synonymous with Rick and Morty’s other co-creator, Dan Harmon.

In Harmon’s “story circle,” each episode demands that the characters go through an eight-step arc. They start somewhere familiar, face new trials and adapt to an unfamiliar situation, then they return to the familiar fundamentally changed on the other side, with some sort of lesson learned or evolution or transformed emotional stakes.

To an extent, Solar Opposites Season 1 tried and failed to stick to this tried-and-true formula. Yet while it shared so much with Rick and Mory — from similar art styles, a shared sci-fi premise, and comedic impulses — something always felt off.

At first, it seemed like what might be lacking was Harmon’s mastery of this tight narrative structure. Often, the co-creator duo was characterized by Roiland being the raw, wild, chaotic creative energy that makes the show distinct, while Harmon served more as the sharpening stone that could translate it into very effective TV.

But multiple times throughout Season 2, Solar Opposites calls out Harmon’s successful yet stifling structure all but by name. Characters deliver winking, fourth-wall-breaking meta-commentary on how they’re not following it anymore, patting themselves on the back for the rare occasions when they do make good on some sort of emotional arc or overarching narrative stake.

In one episode, the two younger aliens find themselves cheating their way through laughably bigger and bigger, higher-stakes situations, expecting repercussions for their amorality. But from cheating to run the mile in gym class in record time all the way through winning the international teen Olympics with America’s entire economy riding on them not getting caught, nothing changes. They never “pay a price,” which is a key turning point in Harmon’s eight-step formula.

Instead, the episode ends with the kids having impossibly gotten away with it all scot-free. The only price they pay is residual anxiety and guilt from getting everything they wanted without consequence or character evolution. So instead, they grab a Schlorpian tech-powered machine that teaches them random life lesson clichés like a morality crack pipe giving them character growth dopamine hits directly to the brain.

It’s hard to see it all as anything but a cheeky yet loving way to poke fun at how their more popular counterpart operates. It reads like Roiland and other Ricky and Morty talent finally releasing themselves from the creative shackles of what works for that show, to find their own uniquely satisfying rhythm.

And boy, do they find it.

Without getting into too many spoiler-y details, Solar Opposites Season 2 ironically manages to both deviate and beat the Harmon story circle at its own game. But it does so through a running B-plot from the last season, brilliantly and slowly transforming a joke that goes way too far into a genuinely thrilling, emotional, multi-part epic story arc.

If you’ll remember,  Season 1 introduced Yumyulack’s Wall, an ant farm-like terrarium of shrunken human beings he has trapped in his bedroom. Well, during the running Season 1 B-plot about the inner workings of the Wall’s society, the totalitarian regime was overthrown, and Season 2 doubles down on the larger-than-life apocalyptic stories of these tiny wall people. In one of the most impressive bottle episodes I’ve ever seen on television, one character is given what feels like a feature-length film with a dramatic framework akin to an Oscar grab. The jokes take a back seat to her sincerely gut-wrenching journey, which sounds like a recipe for disaster in the world of a comedic animated series.

Instead, though, I inexplicably found myself more invested in her story than I did throughout two seasons of The Mandalorian. At several points, I got chills, and maybe even choked up a little bit.

I can’t begin to understand how they did it, but Season 2 of Solar Opposites is a singular work to behold. By simultaneously breaking away from and then reinventing the story wheel that defines Rick and Morty, it’s the ultimate flex for a show that’s both beholden to an OPed predecessor while also divorcing itself from that outsized influence.

Ironically, the Hulu show’s weakest point is its main character pairing. The rule-following Korvo and trashy Terry never come close to the kind of electricity captured in Rick and Morty’s core relationship.

To be fair, it’s hard to compete with two characters brought to life by the same singular, improvisation-driven creative force that is Justin Roiland. But, increasingly, grounding the show’s premise on their “opposite” personalities is proving to be an unsustainable premise. It’s both too contrived to be interesting, yet also not immediately graspable enough to be a fruitful source of narrative tension.

Despite that glaring flaw, everything surrounding Solar Opposites seems to be on the orbital path to an apex. If it continues, it could even one day eclipse the show that used to overshadow it. 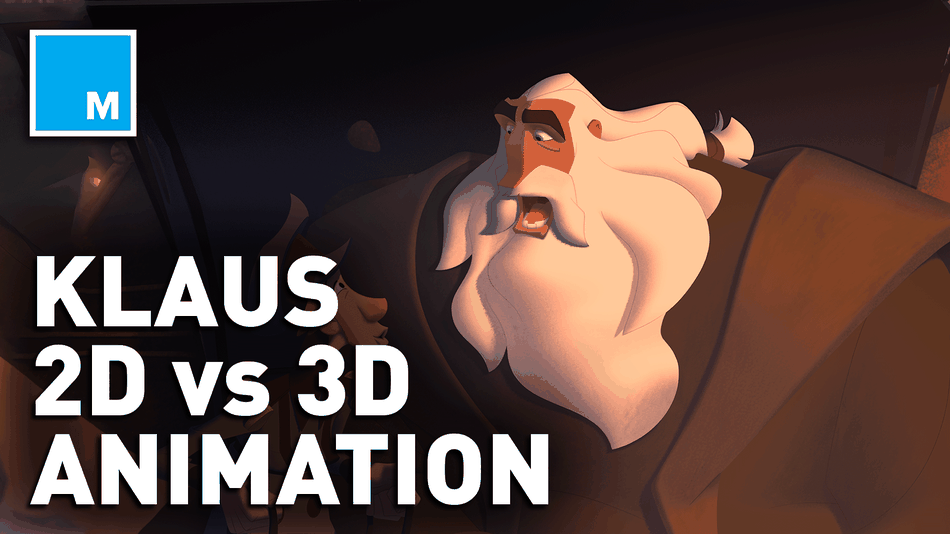 'Klaus' director Sergio Pablos weighs in on the 2D vs. 3D animation debate