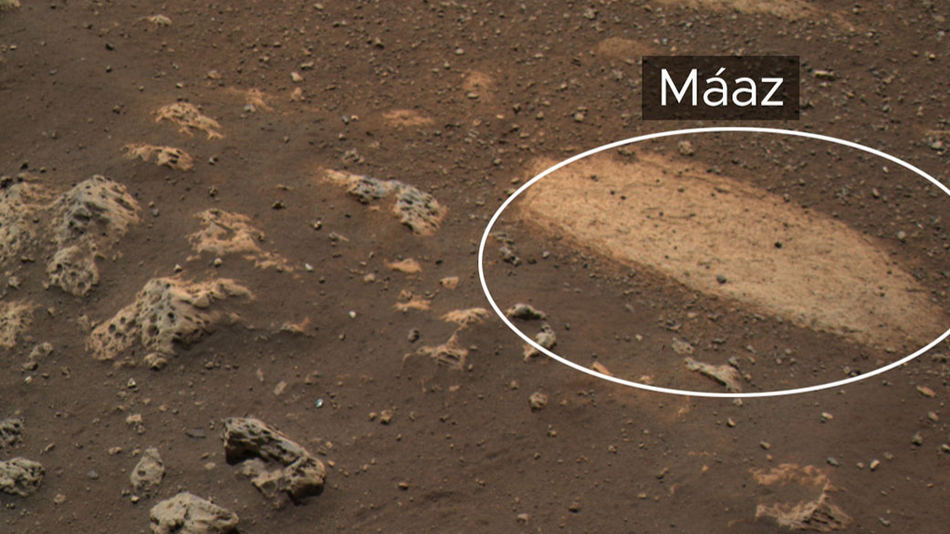 The Perseverance Mars rover has its eyes set on its first area of interest, a rock that’s been given the Navajo-inspired name Máaz, NASA shared Thursday.

My team is working with the Navajo Nation and @NNPrezNez, who are sharing their language to help us informally name features I’m exploring on Mars, like:

Before the rover’s successful landing in Jezero Crater, a spot now named after acclaimed sci-fi author Octavia E. Butler, the mission team divided up the area into zones named after national parks and preserves. Perseverance landed in Tséyi’, the zone named for Canyon de Chelly National Monument in Arizona, an area in Navajo Nation that has geology reminiscent of the red planet.

The team has around 50 Navajo names to be used for findings. Yazzie put forward a handful of naming ideas for features including “bidziil” meaning “strength,” “hoł nilį́” meaning “respect,” and “tséwózí bee hazhmeezh” meaning “rolling rows of pebbles, like waves.” The translation for Perseverance is Ha’ahóni.

“This fateful landing on Mars has created a special opportunity to inspire Navajo youth not just through amazing scientific and engineering feats, but also through the inclusion of our language in such a meaningful way,” Yazzie said in the press release.

The names that have come out of the mission thus far aren’t official ones, just informal nomenclature used by NASA and the general public. Official names must be designated by the International Astronomical Union.

Due to the limitations of Perseverance’s programming language, the rover can’t quite store or read many of these exact Navajo words because of the accent marks needed to convey intonations. For now, the rover is keeping track without any accent marks.

Find out which dinosaurs are under your feet

Chernobyl fungus could protect astronauts from radiation on deep-space missions