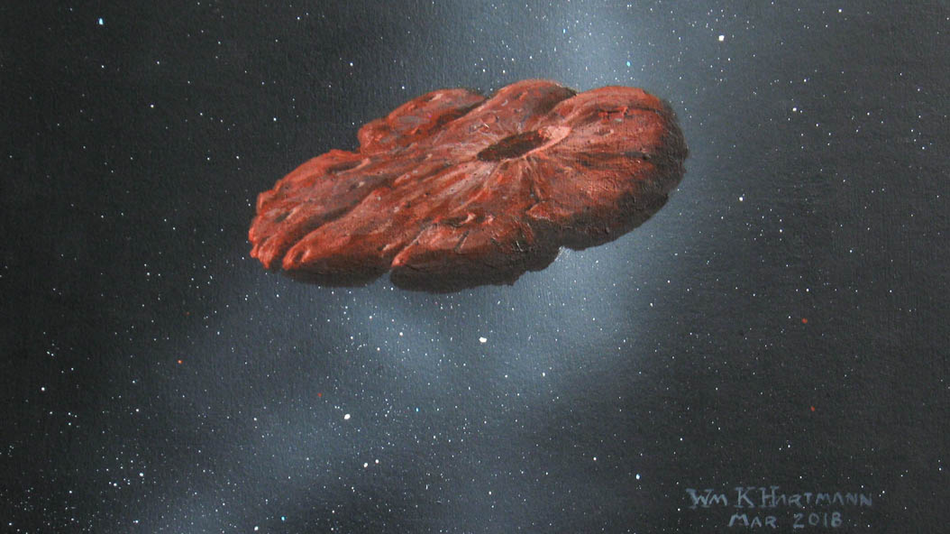 There’s a frozen, interstellar object about half a mile long whizzing through our solar system right now, and nobody has had a particularly clear idea about what it is — until now. According to a published Tuesday in the , it could be a chunk of a Pluto-like planet from another solar system.

It’s called ‘Oumuaumua, a Hawaiian word meaning “scout” or “messenger from afar” in honor of its sighting from the Haleakalā Observatory in Hawaii. The strangely shaped interloper may have once been a piece of a solid nitrogen exoplanet that was sent careening in our direction after an impact roughly 500 million years ago. This new theory is one of the most compelling to come out since ‘Oumuamua’s presence was and implies that other solar systems develop in a way similar to our own.

Rocketing through space at a speed of 196,000 miles per hour, ‘Oumuamua is the first object originating from outside of our solar system that scientists have been able to observe. It has puzzled scientists because it moved like a frozen, dusty comet formed in the colder, outer parts of solar systems, but it didn’t have that signature tail of gas and dust behind it. Others speculated that it was a rocky asteroid formed closer to a sun.

It turns out there may have been a comet-like gas tail streaming behind ‘Oumuamua as the sun melted its surface, but it wasn’t detected on the visible light spectrum. That gas tail created a propulsion effect that pushed it slightly off course of what scientists would expect if it was only affected by gravity.

“We looked at several different ices and the push they would give ‘Oumuamua as they evaporated,” the study from authors Alan Jackson and Steven Desch reads. “We found that the best ice is nitrogen (N2), which would explain many of the things we know about it. ‘Oumuamua was small, about half as long as a city block and only as thick as a three story building, but it was very shiny. The shininess is about the same as the surfaces of Pluto and Triton (Neptune’s largest moon), which are also covered in nitrogen ice.”

A nitrogen composition could account for the interloper’s strange shape.

“As the outer layers of nitrogen ice evaporated, the shape of the body would have become progressively more flattened, just like a bar of soap does as the outer layers get rubbed off through use,” Jackson said in the press release.

Some illustrations depicting ‘Oumuamua don’t have that round, flat, cookie-like shape though. Previous illustrations have looked more like long, oblong cigars.

Much of the speculation around the shape of ‘Oumuamua comes from the fact that scientists didn’t really get a good look at it, said Tom Barclay, a research scientist at the University of Maryland, Baltimore County and NASA Goddard Space Flight Center, in an interview.

“It was moving very quickly and so by the time we were able to start a lot of the observations, it was already relatively faint,” he said.

‘Oumuamua had already passed around the other side of the sun from Earth’s vantage point when scientists first observed it, making it faint and difficult to observe with definitive accuracy. But if this new study is correct, it would mean ‘Oumuamua has melted into a more pancake-like shape, Barclay said.

Given the object’s puzzling characteristics, one astronomer at Harvard put forward the idea that ‘Oumuamua was in fact a moving through our solar system. Part of the theory stems from ‘Oumuamua’s trajectory, which could be explained through the use of propulsion.

“In spacecraft we launch, we use propulsion to move them and change their trajectory,” Barclay, the NASA research scientist, said. “We call these thrusters, they’re firing little bursts of material and it pushes spacecraft in certain directions.”

Comets experience a similar effect when they travel close to stars. Solar energy heats up their frozen materials and they sublimate into gas, giving comets a slight push in a direction away from the star just like ‘Oumuamua’s trajectory. This is not at all unusual, Barclay said.

While the search for extraterrestrial life inside and outside our own solar system is a key objective of space research and an important area of study, it isn’t necessarily prudent to cry “aliens” whenever something isn’t immediately made clear with a natural explanation.

“I think it’s important to examine all the evidence before you jump to aliens,” Barclay said. “Up until now, the answer has never been aliens … I think before getting excited about aliens, you really want to study and rule out other explanations for this.”

Following the historic NASA mission, and the stunning image shows the ISS cruising past the moon

What is climate migration?