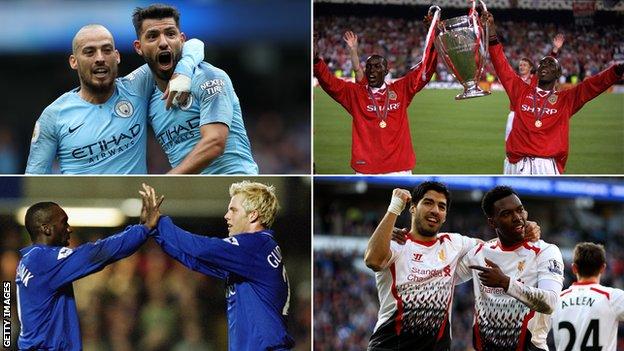 Son and Kane. Salah and Mane. Henry and Bergkamp. The Premier League has had plenty of brilliant striking partnerships. So how do you rank them?

That’s the task facing Gary Lineker, Alan Shearer and Micah Richards in the latest Match of the Day: Top 10 podcast. According to Shearer, the Premier League’s record scorer, successful partnerships “need to have everything” – not just the goals.

To hear how they made their final selections, make sure you listen to the podcast on BBC Sounds and you can rank yours at the bottom of the page too.

Shearer: It was a partnership where they understood each other – they were quick and clever. Gudjohnsen could go short and link up with the midfielders. Hasselbaink was so strong and able to hold people off… then the shot he had! He had big huge thighs. They had long careers and a good understanding.

Richards: Gudjohnsen was one of my former tenants – he was a nice guy. As a player, he was cultured but I would like to have seen him score a few more goals. 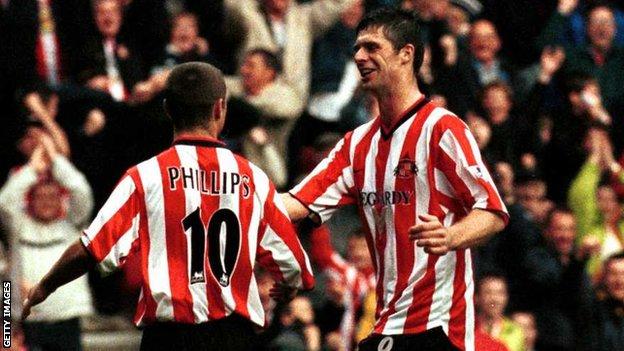 Niall Quinn played for Sunderland between 1996 and 2003, with Kevin Phillips joining when the club were in the First Division in 1997. The pair scored 84 goals between them in two seasons in the second tier, before 91 goals in four Premier League seasons. The pair directly linked up for nine Premier League goals.

Lineker: These two were your archetypal big and small man partnership.

Shearer: That was the way that they played at Sunderland. They got the ball up to Quinn, and Phillips was picking up the scraps. Quinn was a good player, probably underrated in terms of his touch, but the understanding they had, and the knack that Phillips had of putting it in the net is what made them good. People knew what was going to happen, but they couldn’t stop it.

Luis Suarez and Daniel Sturridge combined at Liverpool for one-and-a-half seasons from January 2012. The duo scored 52 Premier League between them in their one full season, as Brendan Rodgers’ side finished second to Manchester City. The pair combined for 11 Premier League goals in total.

Shearer: Suarez had a bit of nastiness about him, which I don’t think is a bad thing in a striker. What a player, though! His technique and ability to run in behind was really good.

Richards: It was too difficult to play against them. I’d try and drop off and they’d get the ball five yards in front and ping a pass outside and get into the box.

Suarez was a nightmare to defend against; you just couldn’t. The only way you could beat him was in the air – that was the only time you would feel comfortable. His finishing was superb. He would be one of the hardest opponents I’ve ever faced.

Son Heung-min and Harry Kane have played together since the South Korea forward arrived at Tottenham in 2015. In that time, Son has scored 67 Premier League goals, while Kane has hit 138. The pair have linked up for 34 Premier League goals in total now.

Richards: Their combinations are brilliant, but they haven’t won anything. I know that isn’t their fault but my list of successful strike partnerships is about trophies from seventh place upwards. Kane has a decision to make now. He’s done everything he can at Spurs, and he sees every elite striker around winning trophies.

Lineker: They have been a fantastic partnership, but Micah’s point about trophies is a good one. They are a contributory factor. 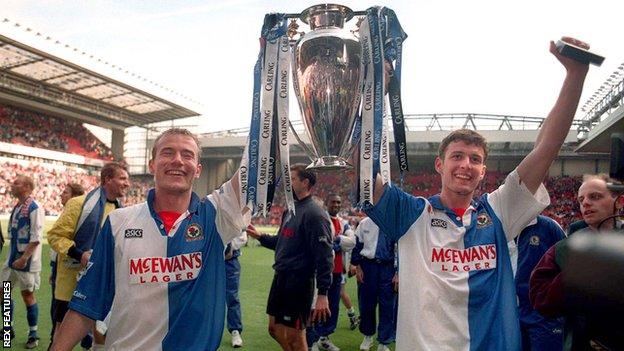 Alan Shearer and Chris Sutton played up front when Blackburn won the Premier League in 1994-95. It was Sutton’s first season at the club, and he scored 15 goals in 40 games, with Shearer adding 34 in 42. Shearer scored 31 the following season, before moving to Newcastle. The pair combined for 14 Premier League goals in total.

Shearer: He wasn’t necessarily my favourite partner, but we worked very well together and won a league title. We had a great understanding and the way we both played was ideally suited to the way the team played.

We had two incredible wingers who were just designed to get up and down and put balls into the box and that is what Sutton and I wanted. He was just quite happy to drop in too, when we didn’t have the ball, and was happy for me to occupy the centre-halves, so from that point of the view the partnership was perfect.

We were friends, but we just didn’t socialise together. He’s different.

Richards: He is an oddball, Sutton. He won’t mind me saying that. He calls himself the horse whisperer.

Sadio Mane joined Liverpool from Southampton in 2016 and has scored 70 league goals, while Mohamed Salah has found the back of the net 92 times in the Premier League since moving from Roma in 2017. The pair have won the Premier League and Champions League, and have combined on 14 occasions for goals in the top flight.

Shearer: I look at these two and wonder whether they actually want the other to score. They have been deadly though, and I do think Roberto Firmino helps them in that sense because he has been the link-up to allow them to have a free role. Their goalscoring record is ridiculous. They are almost impossible to mark when they are on their game.

There is a desperation, a need and a want from Salah to put the ball in the back of the net.

Richards: I believe that about Salah, I’m not sure about Mane, though. I think Mane is a better story too – I didn’t expect him to become this good when he was at Southampton.

David Silva spent 10 seasons at Manchester City after joining in 2010, scoring 60 Premier League goals and assisting another 93. Sergio Aguero joined in 2011 and has become the club’s all-time top goalscorer. The pair have won 11 major honours at the club, including four Premier League titles. They combined for 29 goals in the league.

Richards: We cheated just to get some Manchester City players in, to be honest! I’ve explained Aguero so many times and it is hard to explain why he is so good, because in training he is awful. He couldn’t control the ball, but he came on for his debut and he scored twice and I’d never seen a player been able to switch it on like that. He is the complete striker. He is one the nicest blokes in the world and he is so humble.

Silva loves a bevvy pre-season, he won’t mind me saying, but he loves any beer. He has a pot belly as well – he absolutely hates running. He is just totally gifted. There was a time in Los Angeles we had a midnight curfew, we got back at 6am, and he was still first in everything at training that morning.

Lineker: Silva will have just gone up in a lot of people’s estimations.

Cristiano Ronaldo joined Manchester United from Sporting Lisbon in 2003 and went on to score 84 Premier League goals. Wayne Rooney joined the following season and notched 183 league goals for the Red Devils. The pair won six major trophies – including three league titles and a Champions League – during their five-season spell as team-mates. They combined for 20 Premier League goals.

Shearer: Where do we start with these two? Rooney could play and if you wanted to bully him, then you couldn’t. He could do anything you wanted and he was a leader in his own right. He was magnificent.

We talk about numbers and Ronaldo and Lionel Messi have just taken it to a different level.

Richards: Ronaldo twisted me up left, right and centre; you just couldn’t get near him. He was so gifted.

I would always say that Gareth Bale has been my hardest opponent because he was just up and down and kept coming but with Ronaldo, you just didn’t know what he was going to do.

Thierry Henry joined Arsenal from Juventus in 1999, scoring 175 Premier League goals, and assisting 74 more, in eight seasons. Dennis Bergkamp joined the Gunners in 1995 and struck 87 times in the league and laid on another 94 goals. The pair won two league titles and two FA Cups during their spell as a pair, and linked up for 18 Premier League goals.

Shearer: Henry was so elegant in the way he ran with the ball and his technique.

Richards: Henry was delightful to watch. I remember going to watch a game when I was in City’s academy and he controlled a ball over the top with his right foot, and shot with his left, and I’ve never seen that live before. I was an Arsenal fan growing up and to see that live was great.

Bergkamp’s goal against Newcastle in 2002 might be the best I’ve ever seen. How do you do that? He could have scored more goals but he was effortless the way he played.

Lineker: I’ve got a lot of friends who are Arsenal fans and they say Bergkamp is the man. He was a gorgeous footballer, but I see Henry ahead of him personally. 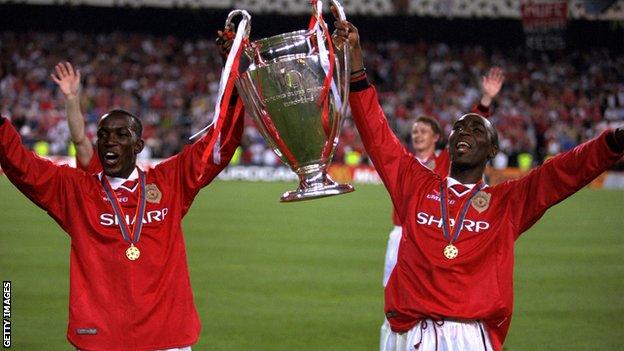 Andy Cole joined Manchester United from Newcastle in 1994 and scored 93 league goals, while Dwight Yorke signed in 1998 and notched 48 league goals in four seasons. The duo were part of the 1999 Treble-winning side and won another two league titles during their partnership. The pair linked up for nine league goals.

Richards: They’ve got the number one spot because of the 1999 season for me. When you hear the word ‘partnership’, you instantly think of these two.

Shearer: Yeah, I would agree with Micah there. It is because of what they won and the 1998-99 season was phenomenal. Cole was an unbelievable finisher. He arguably could be in here twice for his partnership with Peter Beardsley at Newcastle.

NFL picks for the divisional round