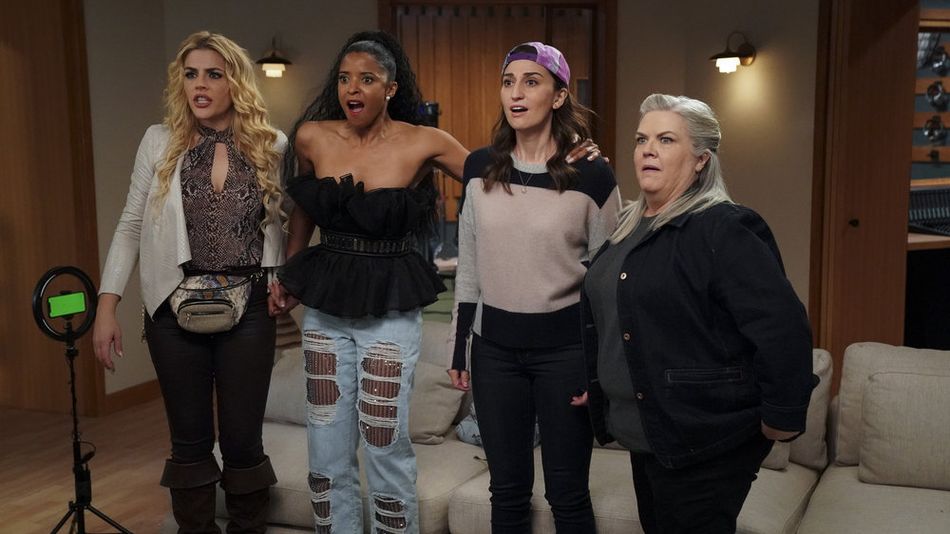 Youth isn’t forever — just ask a pop star. In Peacock’s Girls5eva, created by Meredith Scardino, four adult women reckon with the ephemeral fame of their youth. The spotlight may have been temporary, but their friendship? It’ll last 5eva.

Sara Bareilles, Paula Pell, Renée Elise Goldsberry, and Busy Phillips star as the titular girl group, who enjoyed 90s success but fell off the map. When a young artist samples their old megahit, the girls get back together and try for a second wind — struggling to return to relevance without clinging to the past.

The show reunites Scardino with Unbreakable Kimmy Schmidt executive producers Tina Fey, Robert Carlock, Jeff Richmond, and David Miner (as well as Eric Gurian) — a show that Scardino also wrote on, which gives Girls5eva the same comedy rhythm. The jokes are weird and hyperspecific — designed to elicit that one guffaw per 10 viewers instead of a lukewarm chuckle from the whole audience.

I watched Girls5eva in two sittings, one before and one after a weekend with my college roommates. We are none of us middle-aged former pop stars, but the caricatures on Girls5eva hold true to girl group dynamics. Everyone has a deep-rooted insecurity, a driving passion. Everyone fears being left out or left behind because the group helps center them, offering the kind of tough love and unconditional support that are harder to find as you get older.

The show hinges upon Girls5eva’s chemistry, which isn’t as strong as its individual pillars — but what pillars they are. Bareilles nails it as the de facto straight character, flexing vocal skill as much as her comedic timing. Pell, who wrote for Saturday Night Live, spent less time in front of the camera until recent years, and her turn as Gloria in Girls5eva is just the latest of many roles that elicit our undying gratitude for her performance.

Phillips and Goldsberry are both having the time of their lives, perhaps mismatched in level to the rest of the show but still selling the heck out of every second. This is Goldsberry’s biggest foray yet into live-action comedy, and she should have offers lined up out the door after it. It’s a shame that her character is the only one without a personal life (except for one youthful fling), but finding someone to match her energy is no small task.

The fifth star of Girls5eva — not Ashley Park as the one member who died before the reunion — is Richmond’s soundtrack, now streaming and once again full of ear worms. It evokes the boy bands and girl groups of the ’90s to a T, with tongue-in-cheek lyrics that poke fun at the times (“If our man cheats we’ll only get mad at the other girl / it was her fault only”). Don’t be surprised if you find yourself crooning “Girls5evaaaaa” for days to come.

At eight episodes, Girls5eva will fly by faster than your 20s felt like they did. It’s a fulfilling first season with seeds for more story. It scratches the Kimmy Schmidt itch more than anything, and Fey fans should be satisfied enough to click through that Peacock paywall if they haven’t already. As the title song asks: What are you waiting 5?

Girls5eva is now streaming on Peacock.

The 'Coming 2 America' cast reveals the secrets to being funny