We’ve already covered a lot about the history and provenance of the Famicom Detective Club remakes in our review for The Missing Heir — the first game in the duology, released solely in Japan in 1988 — so you might want to read that review as well if you want the full picture, or you’re intending to get both at a discount.

Famicom Detective Club: The Girl Who Stands Behind is quite similar to its predecessor, in that it’s a detective story starring the same protagonist, but, as a prequel that’s also a follow-up to the first game, it does a few things a little differently.

It’s strange to review The Girl Who Stands Behind as a standalone product when so much of it is so closely tied to The Missing Heir, and we really do recommend that you play both, if murder mystery games are your jam. Anyone who enjoys Ace Attorney will enjoy these games, even as they find similar sources of frustration as the way to progress is less than clear. 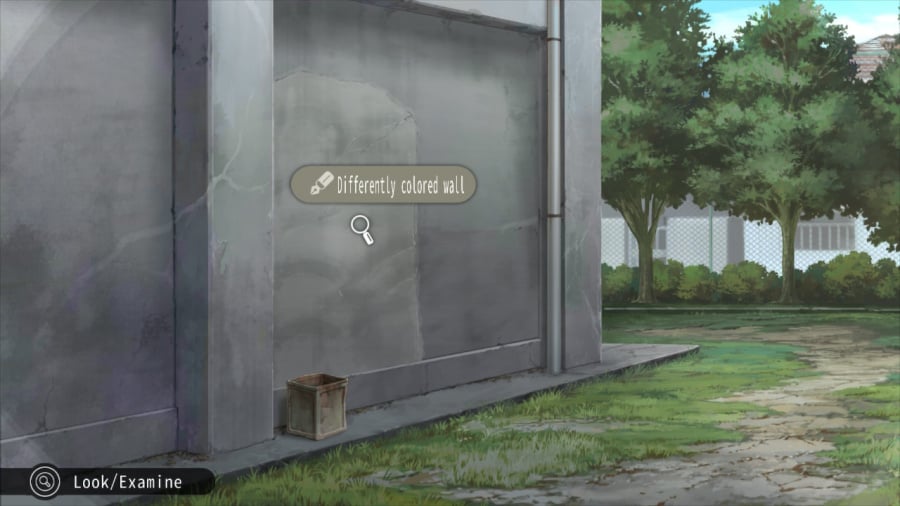 If we had to pick our favourite of the two, it would probably be The Girl Who Stands Behind. In The Missing Heir, a lot of the side-characters are quite unlikeable, or refuse to tell you anything for most of the game, slowing down progress by virtue of being a bit useless. You might have figured something out early on, but the game will lead you by the hand until it decides it’s ready to reveal it to you. The Girl Who Stands Behind improves on that a little, with a cast of intriguing characters who all seem to have a better motivation than “stuck up rich person who thinks you’re beneath them”, at least — but that linearity is still very much present.

The Girl Who Stands Behind is set in a high school, so you’ll mostly be talking to teachers and students, and circling around the same few classrooms to find new clues. Sometimes it can be a little annoying to be in the teachers’ lounge again, but as you get to know the characters you’ll begin to become familiar with their regular haunts.

Where The Missing Heir is about the main character (who you can name; we called ours “Badguy Murderman”) and a mysterious rich family with a secret, The Girl Who Stands Behind is about a school rumour that might hide something terrible. When a student’s corpse washes up on the banks of a river, finding out who killed her will invite the player into a much deeper story than they realise.

Like the first game, there’s a lot of supernatural weirdness going on. However, it’s a lot spookier — the titular “girl who stands behind” is a rumour going around the school about the ghost of a blood-soaked student, and you’ll spend a lot of the game expecting her to be right behind you at any moment.

A few other improvements have been made to the way The Missing Heir did things, although largely The Girl Who Stands Behind is a new story in an old wrapper, albeit a pretty solid one. The “Remember” option from The Missing Heir, which was tricky to figure out, has been replaced with “Think”, which is much more useful, and easier to figure out where it might come in handy. And, like the first game, you can choose between the modern orchestral soundtrack or the original Famicom music — but The Girl Who Stands Behind also gives you the option of a Super Famicom soundtrack, too! 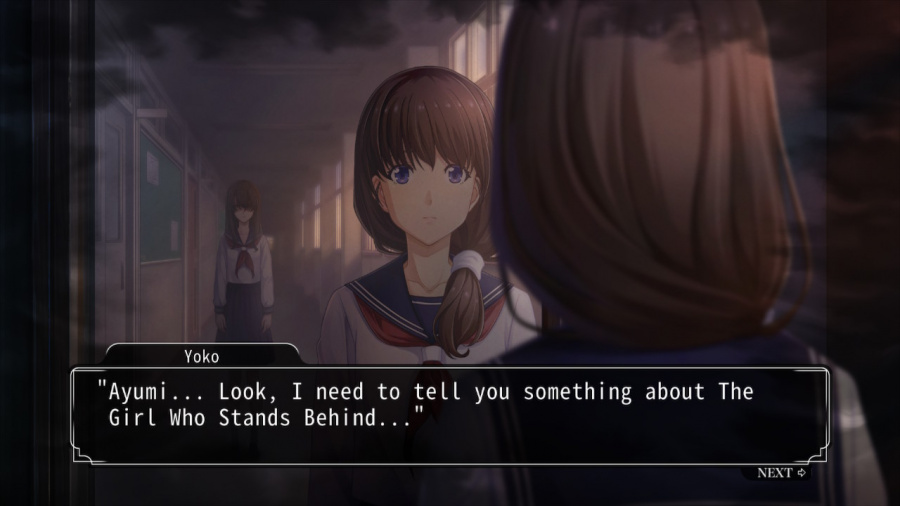 It’s incredible how well these games stand up, three decades after release. The stories are intriguing, and full of twists, turns, and even an impressive amount of tension and fear (nothing too scary, mind you). The visual upgrade, which we praised in The Missing Heir, is still just as high-quality in The Girl Who Stands Behind, although The Missing Heir has a lot more “beautiful” moments of sunlight streaming through trees. The Girl Who Stands Behind, by virtue of being set in a town rather than the countryside, is a little more concrete buildings and rainclouds, but that’s alright.

There will be moments in The Girl Who Stands Behind where it feels a little like the game is hiding things from you for no real reason, other than to stretch the plot out. Characters will be missing from their usual locations for days at a time, and things that seem really obvious — there’s this one bit with a wall that looks weird, you’ll know it when you see it — often go unexamined for far longer than seems necessary. But Ace Attorney does all this as well, and if we can forgive everyone’s favourite detective/lawyer his weird little quirks, then we can let it slide with Famicom Detective Club, too.

After you’ve finished the game, you may find yourself wanting more of the adventures of Badguy Murderman, and we don’t blame you — but we’re not sure if Nintendo is aiming to continue this 33-year-old series, given that Capcom’s Ace Attorney production has slowed wayyyy down, and future Professor Layton games are all but dead in the West after Level-5 pulled out of their North American office. The future looks dark for murder mystery fans, it seems. But, if Famicom Detective Club does well — and it really deserves to — then perhaps Nintendo will see it as a worthy successor to the throne that it built in the first place. Layton and Wright, watch out: there’s a new, and much younger detective on the block. And he’s older than both of you.

The Girl Who Stands Behind is just as appealing and upgraded as The Missing Heir, and we really can’t recommend one without the other, although you can play either separately. The story in The Girl Who Stands Behind is creepier, and the characters are more likeable, though they’re also a little more forgettable at the same time. This double-bill of murder mystery games is a must-play for anyone who loves the genre.