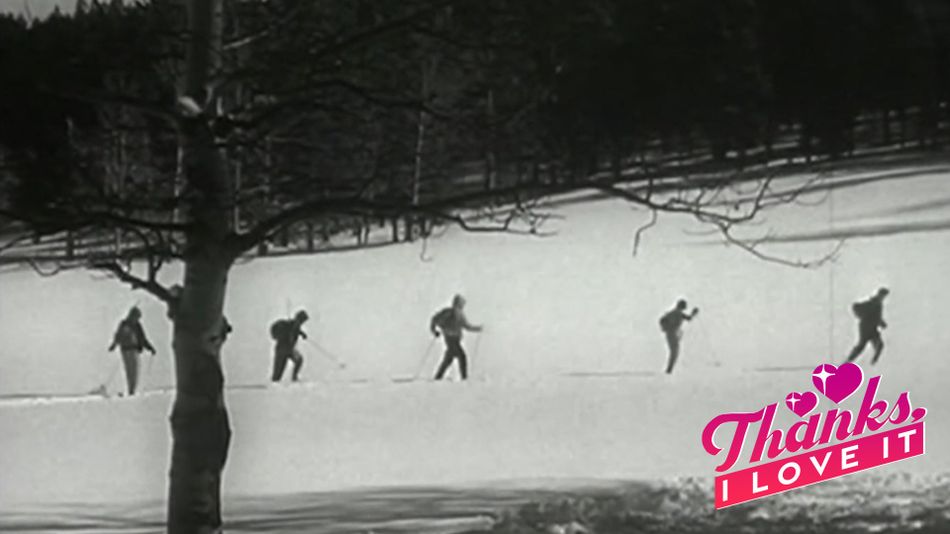 Imagine this: You’re rewatching a film from decades ago. Think 1951’s Cause for Alarm! or 1968’s Night of the Living Dead. Suddenly, you realize that the characters’ words don’t quite match their lip movements. More importantly, the voiceovers don’t match the voices of the actors onscreen. Is it possible that Nick Offerman traveled back to 1939 to star in Made for Each Other? How are these movies all out of order? Why are the stories completely different from how you remember them?

Cinema Toast, created by Jeff Baena (The Little Hours) and produced by the Duplass Brothers (Room 104), is a wacky and experimental ride through footage now in the public domain. Each episode presents a new cut of old films and television episodes which have been re-dubbed and re-scored with entirely new scripts and soundtracks. The result? Something wonderful and slightly insane, with large amounts of emotional complexity at its heart.

The show came about as a way to make art during the pandemic, with Baena recruiting writers, directors, and actors he knew to build these new stories. Each episode offers something completely different. If you’re in the mood for haunting psychological dramas, check out “Quiet Illness,” cobbled together from footage of Loretta Young and written and directed by Aubrey Plaza. Horror and comedy blend together in Marta Cunningham’s “Attack of the Karens,” a new take on Night of the Living Dead where the zombies are racist white women.

Another series highlight is “After the End,” written and directed by Mel Eslyn (Room 104), which uses footage from Beast from Haunted Cave, a 1959 monster movie. Eslyn, who is also an executive producer of Cinema Toast, cleverly reverses the structure of the classic monster movie by opening with the defeat of the beast at the hands of a team of monster hunters. The rest of the episode follows the aftermath of this mission and its effect on the team.

The episode’s structure sprung from Eslyn’s obsession with what happens after the credits roll. “Where do those characters go?” Eslyn said in a phone interview with Mashable. “I find myself always thinking about movies I’ve seen and then starting to write what happens after them. In a monster movie there’s always this epic climax and fight. I thought it would be hilarious if all these people are a ragtag group of misfits and we get to watch the reality of them once the monster’s been killed.”

The result is a comedy-monster movie mashup that feels remarkably fresh, despite the fact that its visuals are from a film made over 50 years ago.

The choice pays off. Not only do we see a fun monster fight as the episode opens, we also get to delve into what makes these monster hunters tick and how they relate to one another as the episode goes on. Without the pressure of an epic movie monster hunt, these characters ski, eat, and go to a bar, all while contending with PTSD or relationships issues.

Eslyn mines a lot of humor from the team’s everyday conversations, using her background in comedy films to create naturalistic dialogue that earns lots of laughs. “I love monster movies, but comedy is my jam, so I wanted a way to have the best of both worlds,” said Eslyn. “If I start with the action and pull everyone in…then I get some time with the slow-moving comedy later on.” The result is a comedy-monster movie mashup that feels remarkably fresh, despite the fact that its visuals are from a film made over 50 years ago.

Adding to the episode’s freshness is yet another subversion of a monster movie trope, that of the damsel in distress. “After the End” positions Bobby (voiced by Sunita Mani), one of its two female characters, as the hero. “Obviously there’s a lack of diversity in these old films, and a lot of women were just side characters. With this episode what I really wanted to do was make the woman the lead character and the one who killed the monster,” said Eslyn. She achieved this goal through some clever editing, especially in the opening monster fight sequence.

Diversifying these films led predominantly by white men was a wider project across Cinema Toast, which committed to having at least half of its directing team be women and cast actors of color to voice white characters. “Since we didn’t have this diversity onscreen because of the limited diversity of older movies, we found ways to do that with the voices,” said Eslyn.

The process of making Cinema Toast was just as exciting and different as the episodes themselves. Eslyn never watched Beast from Haunted Cave with any of its sound, nor did she set out with the goal of making a monster comedy in mind. Instead, she was inspired early on in the film by an image of people making martinis at the top of a ski lift, which tragically did not end up in the final episode.

From there, it was a matter of watching and re-watching the movie to see what other imagery resonated with her. “I just watched the characters’ faces and felt like I could find emotions that were happening in the scenes between the actors, and then out of that built a story based on the way I was perceiving the imagery,” Eslyn said.

Next came what Eslyn describes as the “hardest writing process I have ever had.” She and the other writers and directors working on Cinema Toast had to contend with a number of limitations, including lip movements and how shots were already cut. These constraints led to a lot of creative workarounds and surprising juxtapositions.

Some of Eslyn’s favorite moments from the entirety of Cinema Toast are these kinds of juxtapositions, including ones from the show’s fifth episode, “The Cowboy President,” directed by Jay Duplass. The episode uses footage from old Westerns to tell the story of two operatives sent to discredit Ronald Reagan’s presidency, turning the Wild West into Washington, D.C. At one point, traffic sounds play over a herd of cows. At another, characters proclaim that they’ve found the White House, shown in the episode as a shack.

It’s these kinds of juxtapositions, as well as subversive choices like reversing the order of a monster movie or having a woman destroy the beast, that keep Cinema Toast so exciting. There’s a playfulness and joy running throughout every episode, including “After the End,” and you can’t help but marvel at the risks and experimentation at every turn.

All episodes of Cinema Toast are streaming on Showtime.

my teeth are clean and I have questions