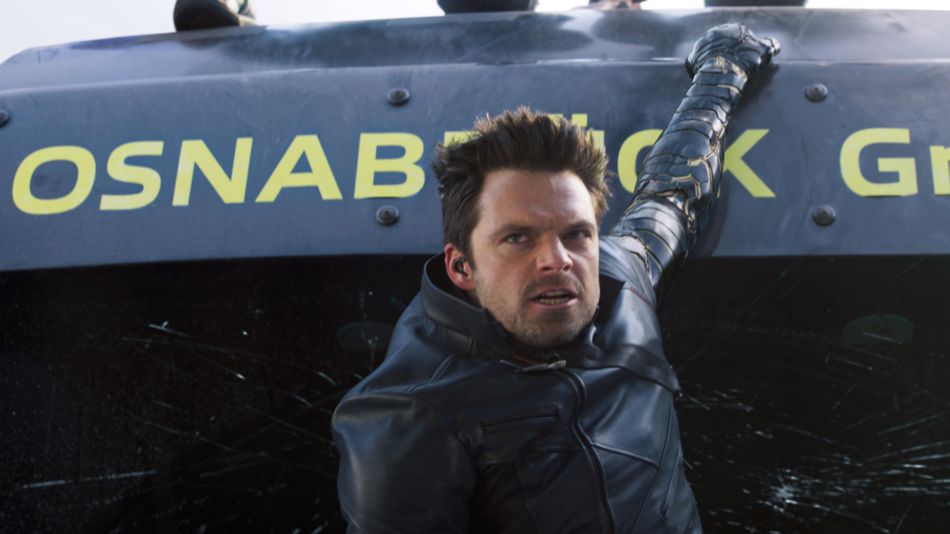 The Falcon and the Winter Soldier is giving Marvel Cinematic Universe characters Sam Wilson and Bucky Barnes time to develop off the silver screen and it’s paying off in spades.

Just two episodes into The Falcon and the Winter Soldier on Disney+ and we know more about Sam’s family and financial situation, Bucky’s dating app habits, and the history of Captain America than we ever did before. Getting to know more about beloved characters is always fun, but one line in Episode 2 of The Falcon and the Winter Soldier revealed something particularly interesting about the stone cold badass that is Bucky Barnes. Namely, he’s the biggest fantasy nerd in the MCU.

The line in question came up when Bucky and Sam were arguing about the types of enemies Avengers typically fight. Sam claims it’s always one of “the big three: aliens, androids and wizards.” Bucky doesn’t believe in wizards and sarcastically asks Sam if he’s fighting Gandalf.

“How do you know about Gandalf?” asks Sam.

Hold up. It’s almost impossible for Bucky to have read The Hobbit in 1937 “when it first came out.” If Bucky is telling the truth here, he must have been a very interesting fellow way back when. To find out why: a history lesson.

The Hobbit was first published in a small printing of 1,500 books that arrived in English bookstores in Sept. 1937. The British publishing company George Allen & Unwin Ltd. pushed a second printing of 3,000 more “first” editions by the year’s end, but The Hobbit didn’t make it into American bookstores until Houghton Mifflin released the first U.S. edition in early 1938.

While The Hobbit was popular enough as a children’s book to merit an initial U.S. printing of roughly 3,000 copies, it’s important to remember that Tolkien wasn’t Tolkien in 1938. He was just a guy with a book about tiny people and wizards, and a positive review in The New York Times didn’t transform The Hobbit into a cultural keystone overnight. The Hobbit wasn’t even a bestseller in America until the mid-1960s, 10 years after The Lord of the Rings trilogy came out and 20 after Bucky was captured by Hydra and transformed into the Winter Soldier.

If Bucky even knew about ‘The Hobbit’ in 1937, it was because he was extremely plugged in to international publishing news and fantasy as a growing genre.

This is all to say that in order for Bucky to have read The Hobbit in 1937, he must have directly imported one of the first 4,500 British copies and read it before December. Even if he misremembered the year and meant to convey that he read the first edition of The Hobbit, he’d still be one of the first 7,500 people in the world to own a copy of Tolkien’s book. This was before Goodreads, before Amazon, and before fantasy books were an acceptable part of adult pop culture consumption. If Bucky even knew about The Hobbit in 1937, it was because he was extremely plugged in to international publishing news and fantasy as a growing genre. So, you know, he was a massive friggin’ nerd.

Looking back at what we know about Bucky’s pre–Winter Soldier life, all the signs that he was a Grade-A weirdo are there. Twenty-year-old Bucky was a six-foot ladies man and boxing champion who spent most of his free time kicking back with Brooklyn’s angriest real-life hobbit, Steve Rogers, and taking art classes. His idea of a last hot date before shipping off to war was taking Doctor Who star Jenna Coleman to a science fair followed by light snacks, dancing, and possibly a threesome. He was absolutely that guy who would read a rare British children’s book on the subway and beat the entire ass off the first person to give him shit about it.

Now that The Falcon and The Winter Soldier is giving Bucky’s character some space to develop outside the unyielding trauma of his existence, we’ll get to learn more about him and what makes him tick. The Hobbit thing is probably a minor fact-checking failure that accidentally gave Bucky a new and deeply weird facet to his personality because it’s in the show and First Edition Hobbit Bucky is canon now. Will future Marvel projects feature Bucky finally getting to read The Lord of the Rings? Will he stop in his tracks when he sees that Tolkien’s friend C.S. Lewis also wrote a fantasy series? Maybe he can pick up some game guides and DM the Avengers’ first D&D campaign. The possibilities are endless when Bucky lets that nerd flag fly.

‘Pen15’ Season 2 wants girls to know they are not the problem: Review