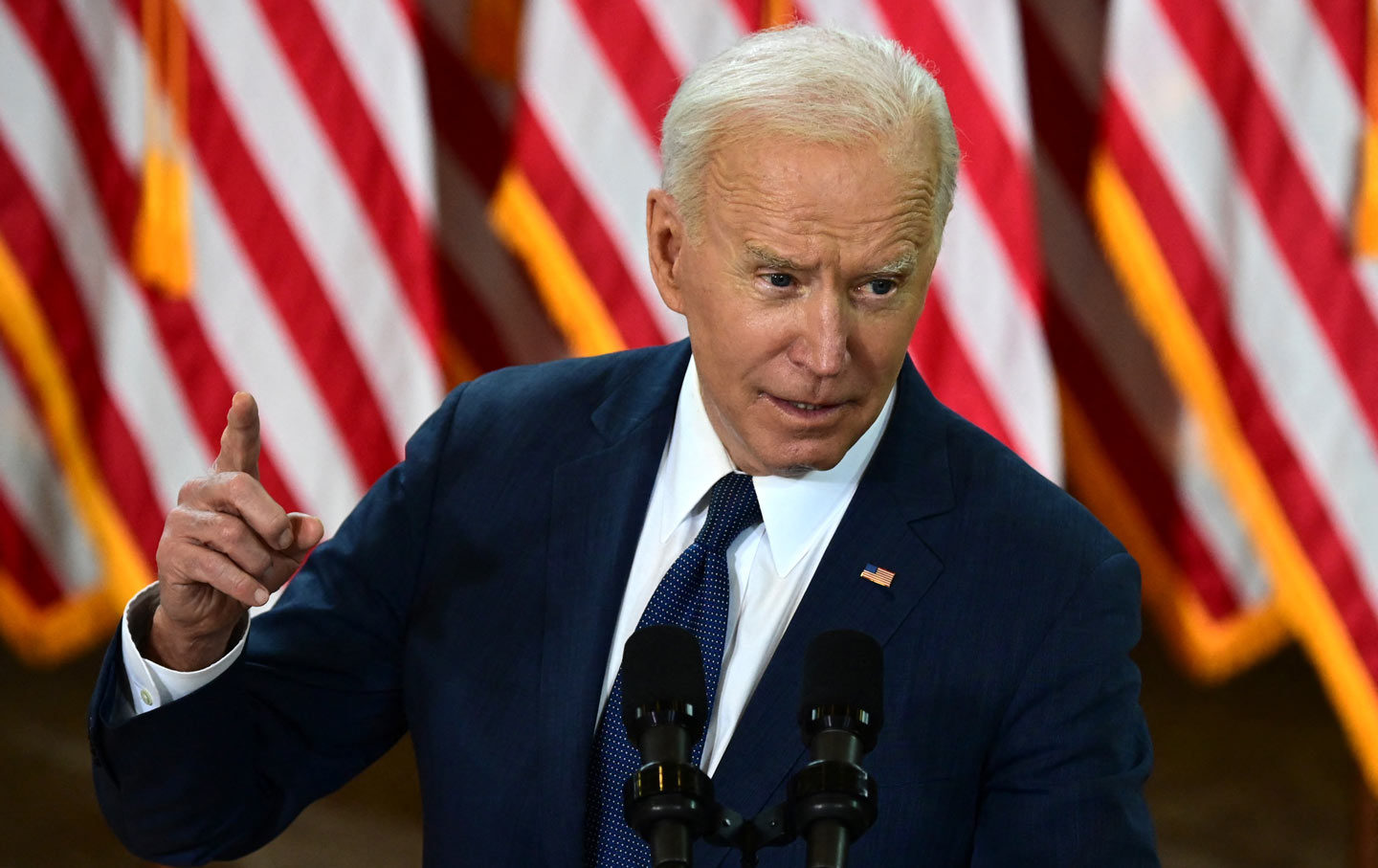 President Biden’s $2 trillion American Jobs Plan proposes a credible down payment on meeting the nation’s long-neglected physical infrastructure needs—$621 billion for roads, bridges, public transit, rail, ports, waterways, airports, and electric vehicles—and it nods in some meaningful ways to the climate concerns raised by campaigners for a more ambitious Green New Deal. The plan, which the president outlined Wednesday, also seeks vital investments in clean drinking water, housing, and high-speed broadband Internet services. But the boldest component of the president’s agenda is its $400 billion commitment to fund the care infrastructure of a just and humane society.

“This plan is historic, transformative,” says Ai-jen Poo, the cofounder and executive director of the National Domestic Workers Alliance, who for years has been working to convince policy-makers that improving the circumstance of caregivers for the elderly and people with disabilities must be seen as a critical infrastructure investment.

Biden’s proposal embraces this idea of “care infrastructure,” and adopts the language of advocates, as it seeks to “solidify the infrastructure of our care economy by creating jobs and raising wages and benefits for essential home care workers.” With a call on Congress to “put $400 billion toward expanding access to quality, affordable home- or community-based care for aging relatives and people with disabilities,” Biden is advancing an agenda that his team says “will help hundreds of thousands of Americans finally obtain the long-term services and support they need, while creating new jobs and offering caregiving workers a long-overdue raise, stronger benefits, and an opportunity to organize or join a union and collectively bargain.”

After generations of policy neglect, by both Democratic and Republican administrations, caregivers are finally getting a measure of the recognition and the support they deserve. This represents remarkable progress, says Poo, who told The Nation, “Investing in home and community-based services and the care workforce will help make these jobs good jobs for the first time, and secure services for people who rely on them. The fact that one of the groups of workers excluded from the original New Deal labor laws is at the forefront of this new New Deal moment says so much. It’s incredibly hopeful.”

Biden’s plan proposes this radical shift in thinking about infrastructure for two reasons. First, advocacy groups and unions have worked for years to make the case for improving the lives of caregivers—as an economic and social justice priority. Second, the coronavirus pandemic has made the need for this sort of investment all the more evident. Poo, the author of The Age of Dignity: Preparing for the Elder Boom in a Changing America, and Heather McCulloch, the founder and executive director of Closing the Women’s Wealth Gap, have made a compelling case in recent months that as the country comes out of a pandemic year that was especially hard on the women who have historically provided so much of the care to so many Americans, “it’s time to think bigger about how we define infrastructure investment and ask who benefits.”

“Each year, about 4 million children are born and 4 million people turn 65,” Poo and McCulloch explain. “Despite the growing demand for systems to care for children, people with disabilities and older adults so that parents and adult family members can work and support their families, the U.S. has one of the weakest systems of support among advanced economies and COVID has brought our patchwork systems to a breaking point.”

The Biden plan acknowledges this reality with proposals to create jobs and raise wages and benefits for care workers. And it does so in language that recognizes an emerging understanding of how investing in the human beings who care for children, seniors, and people with disabilities is just as vital for the economy as investing in roads and bridges.

A White House summary of the infrastructure plan explains:

Even before Covid-19, our country was in the midst of a caregiving crisis. In addition to caring for children, families feel the financial burden of caring for aging relatives and family members with disabilities, and there is a financial strain for people with disabilities living independently to ensure that they are getting care in their homes. At the same time, hundreds of thousands of people who need better care are unable to access it, even though they qualify under Medicaid.

Caregivers—who are disproportionally women of color—have been underpaid and undervalued for far too long. Wages for essential home care workers are approximately $12 per hour, putting them among the lowest paid workers in our economy. In fact, one in six workers in this sector live in poverty.

Relying on research conducted by Christian Weller, Beth Almeida, Marc Cohen, and Robyn Stone for a study released by the LeadingAge LTSS Center at the University of Massachusetts Boston, the Biden team concludes that “increasing the pay of direct care workers greatly enhances workers’ financial security, improves productivity, and increases the quality of care offered.” The White House also argues, based on a working paper produced by Krista Ruffini, a visiting scholar at the Minneapolis Federal Reserve’s Opportunity and Inclusive Growth Institute, that “increased pay for care workers prevented deaths, reduced the number of health violations, and lowered the cost of preventative care.”

This is smart framing to underpin a pair of specific proposals outlined by the White House that would:

Expand access to long-term care services under Medicaid. President Biden believes more people should have the opportunity to receive care at home, in a supportive community, or from a loved one. President Biden’s plan will expand access to home and community-based services (HCBS) and extend the longstanding Money Follows the Person program that supports innovations in the delivery of long-term care.

Put in place an infrastructure to create good middle-class jobs with a free and fair choice to join a union. The HCBS expansion under Medicaid can support well-paying caregiving jobs that include benefits and the ability to collectively bargain, building state infrastructure to improve the quality of services and to support workers. This will improve wages and quality of life for essential home health workers and yield significant economic benefits for low-income communities and communities of color.

Now comes the challenge of selling a plan that asks members of Congress—who are used to supporting traditional roads-and-bridges bills but who have been slow to engage with proposals to improved the circumstance of caregivers—to accept a fuller definition of the word “infrastructure.”

Ai-jen Poo and other advocates are ready for the fight. The #CareCantWait coalition—which includes the National Domestic Workers Alliance, the National Women’s Law Center, the Service Employees International Union, Time’s Up, and MomsRising—plans to mobilize members and will invest in a $20 million advertising and organizing campaign to advocate for what Biden has proposed. But it’s not stopping there. While the National Domestic Workers Alliance celebrated the presidential proposal Wednesday, it pointedly noted, “Next we need paid family & medical leave for all and investments in child care because #CareCantWait!”

Coronavirus to spread faster, outside of China, incite global fear