$100 Million New Jersey Deli Is Representative of Nothing
The nature of “bulletin board” stocks is that they often trade far above fair value no matter what part of the market cycle we’re in, not because of broad excesses.
Bloomberg, April 20, 2021

By now, you surely have heard about the small deli in New Jersey that happens to be a publicly traded company with a market value of about $100 million. The resulting  commentary has focused on how this is a sign of out-of-control markets that, as hedge fund manager David Einhorn of Greenlight Capital wrote in a letter to clients, is “fractured and possibly in the process of breaking completely.”

While the example of Hometown International Inc. seems outrageous, it doesn’t take much effort to show that it really doesn’t prove anything about the current state of markets. The reality is that so-called bulletin board stocks often trade far above fair value no matter what part of the market cycle we’re in, and is not a sign markets are broken. Nor is it proof of investor irrational exuberance or evidence that the regulators have gone AWOL. 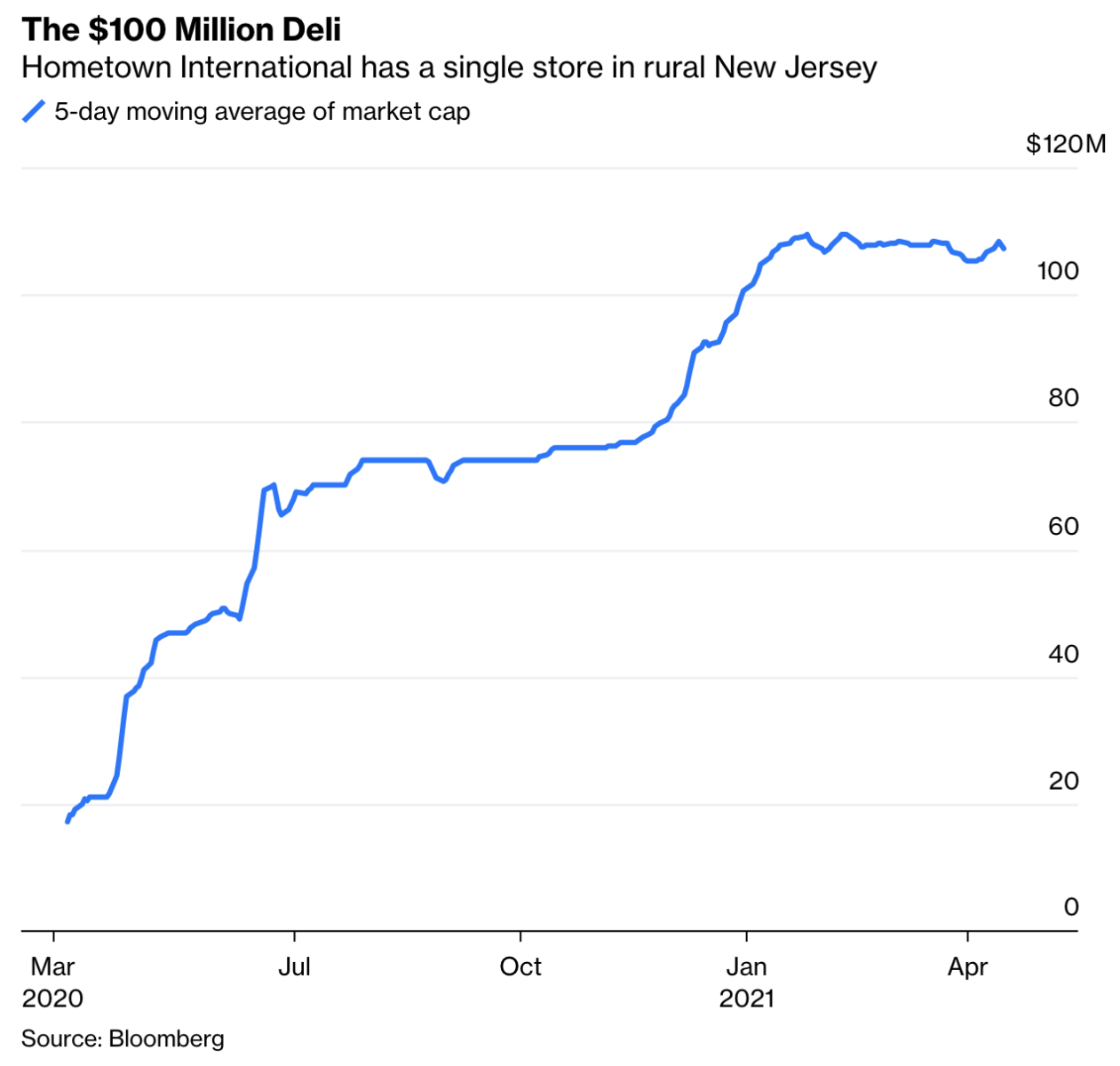 Begin with the view from 30,000 feet: As National Law Review explains, not every security is traded on a credible, auction-based stock exchange. The National Quotation Bureau, or NQB, was organized as a source to learn prices quoted for non-exchange traded stocks in 1913. Quotes were published on pink-colored sheets of paper. Hence, the name “pink sheets.”

These markets by definition require no financial standards to be traded. Securities on the pink-sheet platform are not registered with the Securities and Exchange Commission, and hence have no disclosure or reporting requirements. The SEC sums it up this way: “Companies on OTC Markets Group’s Pink market are not required to meet any minimum standard.” They can be bankrupt or they can be shell companies — and they often are. Generally accepted accounting principles? Meh! They can be transparent or not. Full disclosure? Their call! No public disclosures? Sure, no problem!

Most investors understand to stay far away from pink sheet stocks.  Many of these companies go public through reverse mergers into shell companies. This is the equivalent of paying to go public, instead of raising capital via a traditional initial public offering.   Very often, they become the province of “boiler room” sales pitches and “pump and dump” schemes. Hollywood has even made a few movies about them.

That these unregulated companies are, well, unregulated does not prove the SEC is asleep at the wheel,  but rather, is by design. So what does it say that investors have sent this tiny company with $13,976 in sales in 2020 to a $100 million dollar valuation? Not much. I guess you can say that Hometown at least owns the land under the deli.

In 2015, I wrote about a $100 million grilled-cheese food truck company. It owned a grand total of four trucks, each of which is a rapidly depreciating asset. To be fair, like the “really good pastrami” at Hometown International, these were “really good grilled cheese sandwiches.” The problem, as we discussed, was they were not nine figures good. The company stopped trading publicly in 2019, and in July 2020 announced it was shutting down.

Writing about that silly company was my attempt at disconfirmation — I was hunting for evidence that was contrary to the general bullishness of the market. The best I could come up with was a bulletin board company that was soon delisted.

Since then, markets have doubled.

My takeaway is that overly broad conclusions should not be drawn from bulletin board or pink sheet companies. Any single outlier proves only that a particular company is likely misvalued, and not representative of the entire equities market.

There are dozens of tiny companies trading on the pink sheets right now that change hands at absurd valuations. Why? Because no one has any incentive to find them and then arbitrage them back to reality. They are too small for institutions to bother with; it is a market inefficiency that no cares to fix. (Didn’t the GameStop saga teach people the dangers of shorting tiny, thinly traded companies?) Hence, we have always had lots of really dumb company stocks trading at really absurd valuations.

One thing Einhorn surely got right: “Small investors who get sucked into these situations are likely to be harmed eventually.” The probability of investors losing money is high. But that does not give anyone carte blanche to argue via outliers. That might prove to be just as good a way to lose money as buying pink sheet stocks.

2. One group thatmight not – yet -have learned this lesson are the Robinhood trading accounts. Bloomberg News reported the “newbies” were deep into these micro companies: “Out past the broker-operated venues where Robinhood trades get executed, it’s lightly regulated quotation systems run by firms like OTC Markets, where more than 1 trillion shares in some of the riskiest companies changed hands last month.”

3. When researchers at Vanguard Group investigated why the number of listed companies hasfallen so much since the peak in 1996, they found “that microcap companies accounted for most of the decline.” Sarbanes-Oxley led to exchanges tightened listing rules, and most of these “junkcos” were banished to the pink sheets.

4. The best known is probably “Wolf of Wall Street.”I would suggest “Boiler Room” is worth seeing as well.

5. According to CNBC, a “former lawyer, Gregg Jaclin, was copied on communications filed by the company, Hometown International, with the Securities and Exchange Commission in 2015 and 2016.”

I originally published this at Bloomberg, April 20, 2021. All of my Bloomberg columns can be found here and here.

How to Deal With Social Anxiety in Meetings