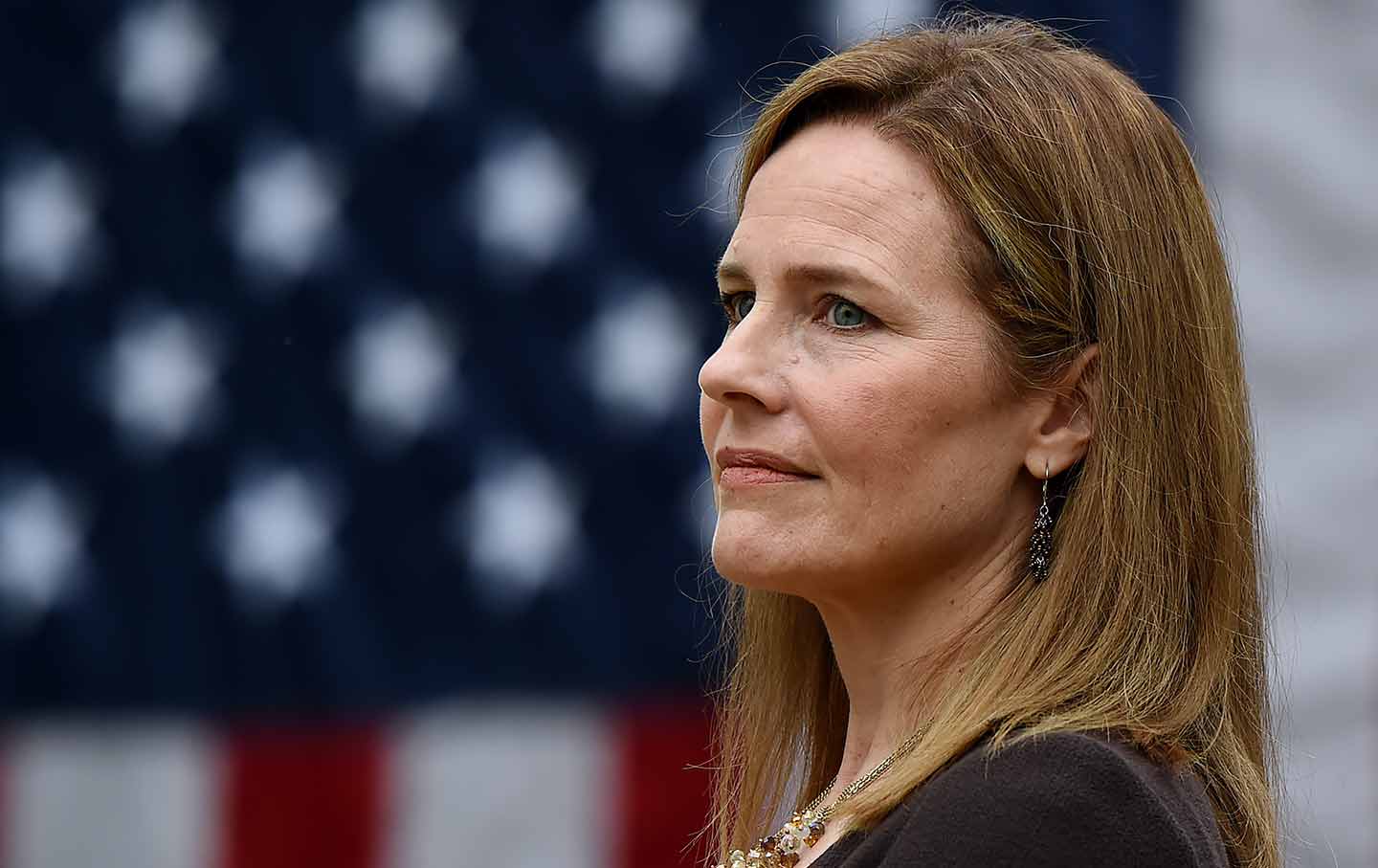 Judge Amy Coney Barrett is nominated to the Supreme Court by President Trump in the Rose Garden on September 26, 2020. (Olivier Douliery / AFP via Getty Images)

President Donald Trump’s Supreme Court nominee, Amy Coney Barrett, is a devout Catholic. Obviously, that has no bearing on her fitness to join the court. The Democratic presidential nominee, Joe Biden, is a devout Catholic. Justice Sonia Sotomayor is Catholic, as are four conservatives currently on the court: Chief Justice John Roberts, Clarence Thomas, Samuel Alito, and Brett Kavanaugh. It is hard to make a case that Catholics, who make up roughly 23 percent of Americans, face discrimination when nominated to the high court (though Biden, if elected, would be only the second Catholic president in our history). Raised Catholic (and still a much-derided “cafeteria Catholic”), I’ve grown up sensitive to anti-Catholic prejudice.

The questions about Barrett’s religious beliefs are not that. They stem from her long membership in the small, charismatic South Bend, Ind.–based Christian sect People of Praise. Although it is open to all Christian denominations, an estimated 90 percent of its 1,800 members are Catholic, the Jesuit magazine America reported this week, adding,“The group also tends to skew conservative, at least politically,” In a 2018 interview with the South Bend Tribune, Barrett’s home paper, the group’s current “coordinator,” Craig Lent, confirmed that People of Praise opposes abortion, gay rights, and marriage equality, and believes that “men are leaders of their families, but that they should be ‘servant leaders,’ as Jesus Christ was.” Still, Lent insisted the group “stays out of politics,” the paper reported.

(Barrett and Trump made no mention of the religious controversy at her nomination ceremony Saturday evening, but the nominee did make a point of talking about her husband, Jesse, as her “partner,” not leader.)

Yet many conservatives, and even a few liberals, are making the specious argument that Barrett’s religious views should be off-limits. Writing for the Boston public radio site WBUR, in a piece headlined, “It’s 2020. Stop Talking About Amy Coney Barrett’s ‘Devout’ Catholicism,” Eileen McNamara argues, “Let’s leave her religion out of it, shall we?” McNamara chides Democrats for examining Barrett’s religious views in 2017 hearings on her nomination to the US Court of Appeals for the Seventh Circuit, attacking Senate Judiciary Democratic leader Dianne Feinstein of California in particular.

Feinstein framed her questions clumsily, at best—another reason I wish she had retired rather than run again in 2018. “You have a long history of believing that your religious beliefs should prevail,” Feinstein told Barrett. “The dogma lives loudly within you.” (I don’t even know what that means; it brings to mind The Exorcist.)

Barrett’s religious views themselves would not be of concern, if we didn’t have ample evidence that they influence her legal views. And it’s important to note that People of Praise is significantly more restrictive than Catholicism. The group has gotten some exaggerated and unfair coverage—while it traditionally termed male community leaders “heads” and their female counterparts “handmaids,” it didn’t inspire Margaret Atwood’s The Handmaid’s Tale (though, to be safe, it changed “handmaids” to “leaders” after the Hulu hit debuted). Cult experts say it’s not a cult. If you check out its Facebook page, most posts are inspiring stories of charity and grace. Also: Its post-Covid events feature people making, distributing, and wearing masks!

But there is no denying that the group opposes abortion and gay marriage and bars “out” LGBT people from membership. Its South Bend school, Trinity, where Barrett was on the board for several years, teaches male and female students separately and prohibits dating. In 2017, The New York Times reported that while group members confirmed that Barrett and her husband were part of People of Praise—in fact, both their fathers had been leaders—she didn’t disclose her membership in Senate confirmation documents. Meanwhile, links that mentioned her in the group’s magazine Vine and Branches—some recent, according to the Times—vanished from its website.

So why have even liberals insisted that Barrett’s eccentric religious views are off-limits when considering her SCOTUS appointment? “You can’t say that our faith on the one hand has ramifications for politics, law and the common good and on the other hand expect not to answer questions about it,” Cathleen Kaveny, a professor of law and theology at Boston College, told America in 2017. Catholic scholar Massimo Faggioli wrote in Politico that Barrett’s association with People of Praise should be “front and center” in the discussion of her qualifications, given the group’s “highly authoritarian internal structure,” which by many accounts requires a “covenant” between members and God. But in Slate, Molly Olmstead warns that conservatives have already set a trap for Democrats who raise questions about Barrett’s affiliation with People of Praise. If they go there, she argues, “the right already has its response ready to go.”

But what else is new? The right relies on a culture of grievance, and SCOTUS battles are no different. Clarence Thomas complained about “a high-tech lynching” when asked about genuine charges of workplace sexual harassment, and Brett Kavanaugh’s angry, almost weepy denial of credible (albeit long ago) charges of attempted sexual assault likewise won him confirmation. Trump is currently charging that Biden’s eventual victory, indicated by most polls, will be the result of rampant fraud—an obvious lie—and threatening not to leave the presidency. This is what they do.

Still, I understand why people think it’s risky to engage Barrett’s religious views—especially given that Democrats botched it three years ago. There’s already plenty of evidence on the record without examining her relationship with People of Praise. She signed an open letter to Catholic bishops in 2015 supporting traditional gender hierarchy and opposing abortion and marriage equality. She has declared abortion “always immoral” and routinely mischaracterizes the law as Roe v. Wade established it. As my colleague Elie Mystal wrote this weekend, “Barrett has put herself on the record against abortion rights generally, and Roe specifically, more than any person I can think of nominated for the Supreme Court after that 1973 decision.”

She is also, as Mystal argues, a hypocrite. She has written that Catholic judges who believe their church’s teachings against the death penalty should recuse themselves from death penalty cases, but she goes out of her way to get involved in cases involving abortion. If she believes her religious views would prevent her from impartially enforcing secular law on capital punishment, why can’t she admit they do the same when it comes to women’s established legal right to make their own health decisions? (At her confirmation hearings, she seemed to backtrack on her suggestion that she would recuse herself from death penalty cases.)

Still, as a Catholic I find it offensive to see Barrett’s extremist beliefs equated with Catholicism or the views of American Catholics. We support a woman’s right to choose in most circumstances. An overwhelming majority support contraception, and Catholics are slightly more likely to back marriage equality than other Americans. Most American Catholics support parity in gender relations, and reject the notion that the man is the “head” of the family. (Not even Pope Francis preaches that, though he opposes abortion, contraception, and the ordination of women.)

Also as a Catholic, I find it hard to square Barrett’s conservative morality with her decision to accept a nomination from a thrice-married adulterer credibly accused of sexual harassment or assault by between one and two dozen women. I also question the morality and the judicial integrity of anyone who would agree to be nominated by someone who has all but said he expects the Supreme Court to weigh in on his side in the case of election “fraud.” If Barrett won’t recuse herself on the issues of abortion or, now, apparently, the death penalty, she should be required to recuse herself if the matter of Trump’s presidency comes before her as a justice. I doubt that she’d do that, but Democrats should grill her on that moral question just the same.

Free main party members back Biden, despite prior vows to stay out of the main

Chris Hayes spread the enthusiasm, and the motion of the video and his child