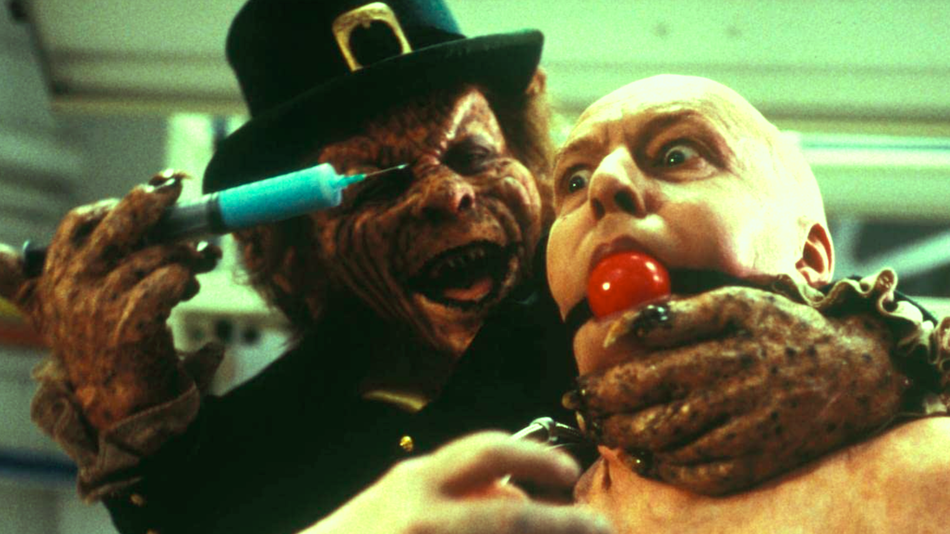 Leprechaun is a terrible franchise, but there’s never been a better St. Patrick’s Day to binge it!

See, in non-pandemic times, I wouldn’t recommend watching one of horror’s schlockiest offerings — let alone all eight of its installments — when you could be out with friends. Who am I to stand between you and the promise of a well-deserved Guinness, whiskey shot, and/or a green outfit you definitely thought was cuter when you left the house? But these are dire times, at least for a little while longer. And for that, Leprechaun is absolutely perfect.

Created by writer-director Mark Jones in the early ’90s, Leprechaun and its titular villain, named “Lubdan” and played by actor Warwick Davis for all but the last two films, is spectacularly messy.  It’s had half a dozen different directors, many more cast members, and a history that began even before the Scream franchise. The result, a wildly uneven blend of comedy and kills, has become an icon of B-level horror, 420-friendly cinema, and, of course, St. Patrick’s Day. It’s messy, it’s stupid, and it’s absolutely worth watching at least once.

So, to help you have a truly memorable holiday while still at home, here are all eight of the Leprechaun films, ranked from genuinely bad to “so bad, it’s great.” (If you’re of age, don’t forget to google the associated drinking games. There’s plenty to choose from!) Happy St. Patrick’s Day!

One thing the Leprechaun franchise definitely did not need was a gritty reboot from the WWE. Alas, in 2014, that’s what director Zach Lipovsky unleashed onto the world and so, I must rank it.

In this almost unwatchable franchise reboot, professional wrestler Dylan Mark Postle — better known as “Hornswoggle” — plays a far less interesting version of the titular trickster, as encountered by a group of young tourists visiting Ireland. The attacks are more brutal, but the fun is sucked out by an animalistic leprechaun that looks more like an overcooked wonton than a monster.

You could theoretically watch this movie. That is your right.

How to watch: Leprechaun: Origins is now streaming on Peacock.

As far as dumb ideas go, Leprechaun in the Hood is a great one. The fifth title in the Leprechaun franchise, this 2000 straight-to-home video release (to be clear, nothing after Leprechaun 2 saw theaters) follows Lubdan through the Los Angeles rap scene for a lot of campy fun.

From scantily clad “Zombie Fly Girls” to four-leaf clover-laced joints, Leprechaun in the Hood parodies aughts-era hip hop culture by blending Blaxploitation tropes with the ridiculousness one should expect of a Leprechaun sequel. It’s a surprisingly winning combination that has earned the film a sizable, and decidedly 420-friendly, following.

However, it should be noted that this title contains some overtly transphobic jokes that are not worth watching. On those grounds, absolutely feel free to skip this one. I always do.

How to watch: Leprechaun in the Hood is now streaming on Peacock.

Leprechaun 2 — hilariously, also marketed as One Wedding and Lots of Funerals at the time of its release — sees the franchise just begin to grasp its comedic potential.

Set in 1994 Los Angeles, Leprechaun‘s first sequel follows Lubdan as he tries to kidnap and wed some poor guy’s girlfriend thanks to a thousand-year-old curse. It’s a relatively lame outing compared to where the fiendish villain would eventually go, but does see Lubdan come into his own as a walking one-liner with a shitty attitude. It’s good enough, but by no means mandatory viewing.

How to watch: Leprechaun 2 is now streaming on Peacock.

OK, “Leprechaun but put it in space” is exactly the low-hanging fruit you think it is. That said, this sci-fi romp (with a truly surprising amount of nudity) will always hold a special place in my heart.

In it, director Brian Trenchard-Smith, also responsible for the excellent Leprechaun 3, sends Lubdan to the year 2096 for a completely inexplicable outing with an intergalactic princess and a slew of space marines. It’s one of those campy movies that never seems to take itself seriously enough to land, and there’s a lot about it that’s just kind of gross and stupid. But the schlocky script and over-the-top visuals make for an adequately bonkers watch. It’s worth seeing once, but only once.

How to watch: Leprechaun 4: In Space is now streaming on Peacock.

Ah, it’s the misguided idea that started it all. I just might shed a tear!

Undeniably, the best argument for watching the first Leprechaun is Jennifer Aniston. Yep, that Jennifer Aniston. Get in on the ground floor with this ridiculous saga by watching Aniston’s feature-length debut as Tory Reding, a not terribly well-written scream queen the actor has made it clear she’d rather forget. Set in North Dakota at the infamous O’Grady farmhouse, Leprechaun follows Tory as she acclimates to life outside the big city, which coincidentally involves fighting an evil leprechaun who tells really mean rhymes. “This old Lep, he played one, he played pogo on his lung!”

How to watch: Leprechaun is now streaming on Peacock.

Lubdan’s 1995 trip to Las Vegas is really where this franchise started to pick up steam. In Leprechaun 3, director Brian Trenchard-Smith crafts a poorly paced but remarkably extravagant adventure that lets everyone’s favorite green-wearing asshole be the showboat he is. You’ve got some really fun kills, for sure, but the real delight in this project comes in the less aggressive moments. I mean, Lubdan just absolutely gorging himself on casino potatoes? Because he’s a leprechaun? Brilliant! Incredible! Amazing! Again!

How to watch: Leprechaun 3 is now streaming on Peacock.

If any part of you is a fan of the Scary Movie franchise, Leprechaun‘s sixth outing was made for you.

Writer-director Steven Ayromlooi’s truly hysterical follow-up to Leprechaun in the Hood (which doesn’t actually continue that story at all) takes us back to Los Angeles for a far stronger take on Lubdan in the big city. With a tremendously capable ensemble cast and Davis performing at the absolute top of his game — Back 2 tha Hood was his final film before leaving the franchise — this sequel really crystallizes all that the other heavily comedic Leprechaun movies could have been.

Highlights to look forward to include: an LAPD officer pulling a Black Knight from Monty Python and the Holy Grail, Lubdan facing his worst death yet, and a whole lot of weed humor. You’ll love it.

How to watch: Leprechaun: Back 2 tha Hood is now streaming on Peacock.

Known in 2021 for his cult hit PG: Psycho Goreman, director Steven Kostanski resurrected the Leprechaun franchise after its lackluster reboot — and thank Saint Patrick he did. Instead of continuing the gritty tenor established in Leprechaun: Origins, Kostanski takes fans back to the camp of the original, setting his film 25 years after the events of Leprechaun (1993) and reestablishing the series as a source of gorey, goofy spectacle.

Taylor Spreitler stars as Lila, the daughter of Aniston’s character from the first film, who returns to the O’Grady farmhouse for a philanthropy project. But little does Lila know, Luban, played by actor Linden Porco for the first time, is still there seeking his gold.

How to watch: Leprechaun Returns is now streaming with Hulu live TV, and available for rent or purchase on Amazon Prime Video, Google Play, iTunes, and YouTube.

‘Pen15’ Season 2 wants girls to know they are not the problem: Review