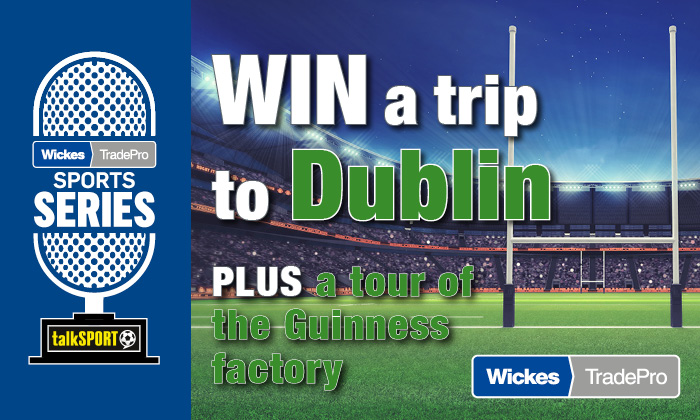 
On February 7th, in the first of 2020’s special Wickes TradePro Sports Series broadcasts, the Jim White show is heading out to Dublin to commemorate a legendary Six Nations rugby clash, as Ireland host Wales at the Aviva Stadium for the 130th Test between the nations.

To celebrate, one lucky winner and a friend will be joining Jim in Dublin for the show, with an epic £150 spending money, and a 3 night hotel stay to fully enjoy the ‘craic’ in Dublin for the weekend, thanks to Wickes TradePro.

For your chance to join talkSPORT’s rugby extravaganza, have a go at the question below.

To enter, winner and guest must be available to travel from Thursday 6th Feb to Sunday 9th Feb.

Thanks to Wickes, where TradePro customers get 10% off every time they shop.

Please note that by entering this competition you consent to having your details used in accordance with the Wireless Privacy Policy and your data will be used to contact you in case you are selected as the winner.

The EPL is officially back, Liverpool are set to claim their crown

Sports News and gossip move: Chelsea No. Timo Werner for £ hour 53 minutes, Everton vs Liverpool as the Sunday 7pm slot