Imagine you’re a farmer, and for the third year in a row, most of your crops die during an intense heat wave. Or that your home is destroyed by a hurricane, flood, or fire. Maybe you’ve had to rebuild multiple times already. Or you don’t have a home at all anymore. What do you do?

“It could be natural disasters, it could be some steady deterioration in their livelihood systems,” like farming or raising livestock, said Alex de Sherbinin, a geographer at the Center for International Earth Science Information Network at Columbia University’s Earth Institute. “People are going to need to leave areas where conditions are not so hospitable anymore.”

Migration related to natural disasters and agriculture isn’t new. For example, at least 500,000 people immigrated to the United States from Ireland during the Irish Potato Famine. Yet as our climate changes, more people will be forced to leave their homes in the face of environmental like rising sea levels, extreme heat, fires, flooding, and an increase in the strength of storms like hurricanes. The United Nations International Organization for Migration (IOM) that estimates range from 25 million to a billion people who could be displaced by 2050 as the result of climate change.

Although the scope of this issue is likely vast, it can be hard to quantify. That’s in part because climate might be just one of several reasons someone might leave their home, said de Sherbinin. Climate impacts might also make these other problems, like a government or economic system that puts some farmers at a disproportionate disadvantage, even worse.

“These are all additional factors, and often, far more important factors,” he said.

In fact, de Sherbinin said that all of these factors can make it hard to tell who counts as a “climate migrant,” or even if the category exists independently at all. More often than not, environmental change is not a person’s primary reason for leaving their home, and even if it is, there’s a huge web of contributing factors, like poverty, agricultural collapse, lack of jobs, discrimination, or violence.

For instance, some people point to the impact that the climate may have had on the Syrian refugee crisis that began with the country’s civil war in March 2011, said Valeria Mueller, a development and environmental economist at Arizona State University who studies climate migration. A severe drought in Syria may have amplified political unrest, contributing to Syria’s civil war that forced so many to flee, said Mueller. Over 5 million refugees have fled Syria since 2011, while another 6 million have had to leave their homes for other parts of the country.

In other cases, a person’s circumstances might make it less likely for them to migrate, said Mueller. Poverty could leave people without the resources to leave, and in other cases, events like floods displace people only within their country, and often temporarily. In a Mueller did on internal displacement in Bangladesh, flooding did not seem to permanently displace people at all, which Mueller thinks is because flooding can sometimes be a good thing.

“Freshwater flooding is actually beneficial for the soil,” Mueller said. “So people are going to go back to their land after the flooding is over, because they’re actually going to have a more productive crop afterwards.”

That wasn’t to say that flooding never permanently impacts migration, said Mueller. The same study in Bangladesh linked increases in the amount of salt in the soil to permanent migration, suggesting that the ocean flooding causing the increases is far more damaging in the long-term because of its impact on farming.

Other climate impacts, like heat and drought, are far more likely to predict if people will migrate, said Mueller. In a 2014 study published in the journal Nature, she found that in rural Pakistan, floods had very little effect on migration, while heat stress had a significant effect. Both men and women were more likely to leave their homes during periods of intense heat, and men were 11 times more likely to do so during periods of both intense heat and extremely low rainfall. The study notes that historically, men in Pakistan are more likely than women to leave home to seek employment elsewhere.

Internal migration can be devastating. The Internal Displacement Monitoring Centre (IDMC) Global Report on Internal Displacement 2020 found that globally, nearly 24 million people were displaced by weather and climate-related events in 2019. Internally displaced people face many of the same problems as those who have fled to another country, including loss of housing, access to work, education, healthcare, social life, and security.

But while most migrants would rather avoid the legal and logistical nightmare of crossing national borders, it’s not always possible. A recent created in collaboration between The New York Times Magazine, ProPublica, and The Pulitzer Center showed that many migrants will first flock to cities within their country as climate change impacts rural life. But migrants will start to leave these cities as they become overcrowded, eventually crossing borders. In fact, the same New York Times Magazine article noted that this is already happening in places like Guatemala, where drought and unpredictable weather patterns are pushing people out of farming communities.

People who leave their home countries due to climate impacts face the same problems as any migrant. Migrants leaving Central America for the U.S, for instance, often travel in harsh or dangerous conditions, cramming into freight trains and facing potential violence at the hands of police and immigration officials. As Global Citizen points out, once they get to the U.S., they can struggle to find work, and encounter cultural and language barriers. The jobs that many do find are often menial and low-paying — even those who were skilled workers like engineers and teachers likely won’t find the same position open to them after migrating. Most migrants who are undocumented also run the constant risk of deportation, although a January UN decision ruled that migrants cannot be sent home if a climate-related events puts them in immediate danger.

Even when a migrant is not in “immediate danger,” they may feel unsafe returning home, such as in cases of agricultural collapse, say experts. This has led many to argue for a category of “climate refugees,” although no legal status of the kind exists, said Marium Traore Chazanoel, a specialist on migration, the environment, and climate change at the IOM. The official definition of a refugee under international law is very narrow — refugees must be fleeing their home country and be unable to return due to “race, religion, nationality, membership of a particular social group, or political opinion,” according to the United Nations High Commissioner on Refugees (UNHCR) . Reasons related to climate do not fall into this category.

Experts believe a legal definition like “climate refugee” would offer climate migrants the same protections that current refugees are afforded. For instance, they would be able to apply for asylum and would not be sent back to their home country, gain some freedom to choose where they live within a country. Asylum seekers are also detained rather than sent back to their home country while they seek asylum. Asylum status also applies to a person’s family, making it easier for all family members to successfully immigrate to a new country.

The UNHCR and many others acknowledge that those fleeing climate impacts often face the same issues when returning home. For instance, those who once relied on farming may not longer be able to consistently grow enough crops due to heat, drought, and unpredictable weather. Even de Sherbinin acknowledges that the term “climate refugee” conveys the similarities between the groups, capturing a sense of urgency that “climate migrant” lacks.

Amali Tower agrees. She’s the founder and executive director of an organization called , an organization dedicated to protecting the rights of people displaced by climate change. From advocacy research to global monitoring, Tower said the organization mostly focuses on trying to understand the experiences of people, not on which words are used to describe them.

“We’re really trying to promote a more nuanced understanding of not just terminology, but what are the human impacts? What are people facing?” said Tower.

Tower ties the organization’s approach to environmental justice — the idea that all people, regardless of race, nationality, immigration status, or any other factor should have a meaningful part in determining the environmental policies that impact their lives. Right now, those with less resources and ability to adapt to climate change are bearing the brunt of its effects. Problems of poverty, unstable governments, and conflict date back to long histories of colonization and exploitation, connecting modern problems to legacies of injustice. Climate change, which already often affects people in these areas more than people in counties that contributed more to the problem, only compounds these issues that date back to colonization.

“My use of the term (climate refugee) is to bring light to the political responsibility of it all,” said Tower.

Unfortunately, determining how to best address climate migrations can be as complicated as unraveling the forces that contribute to it. One strategy is to try to limit climate-related displacement by giving communities ways to cope with climate impacts, like sustainable farming methods, said Traore Chazanoel. But Mueller worries countries that employ this approach can veer towards focusing on keeping migrants out. Limiting migration on its own may also not be helpful to migrants.

“Migration has always been a poverty-reducing strategy,” she said. In many cases, a relative migrating and sending money home will enable the rest of the family to stay in the community, and many families doing the same thing can enrich the community as a whole.

To this end, Tower emphasized that both strategies — providing communities with ways to cope with climate change, potentially preventing migration; and also assisting those who choose to migrate — are necessary. Organizations like the help communities build what’s called climate resilience — taking steps to make communities less vulnerable to climate change. At the same time, Climate Refugees focuses on advocacy, working within the existing legal system as well as talking to politicians about laws to address the issue of climate migration. They also join organizations lobbying for changes in international law, recently signing a request to the UN to recognize the right to a healthy environment as a universal human right along with 800 other organizations. Tower said her organization is one of the few focusing exclusively on the intersections between migration and climate change. She said that one of the most effective ways to help climate migrants is to call local legislatures in support of laws that help migrants and refugees of all kinds.

These could include bills like The Embrace Act, a law proposed by New York Representative Alexandria Ocasio-Cortez in 2019 that would guarantee all people, regardless of immigration status, access to federal benefits like social security, medicare, disability payments, and unemployment payments, among others.

There are some signs that the issue of climate migration is gaining more attention. The United Nations , adopted in 2018 to cope with increasing global migration, mentions climate change as a driver of migration, and in 2019, UNHCR appointed its first Special Advisor on Climate Action, Andrew Harper. In 2018, the World Bank’s report estimated that over 140 million people could be internally displaced across South Asia, Latin America, and Sub-Saharan Africa by 2050.

Beyond the issue and the numbers, Traore Chazanoel said she hopes people will remember the lives of other human beings and have compassion for them.

“They are people first and foremost before being migrants,” she said. “It’s not just a mass of anonymous people.”

First, the chilling image of the Earth 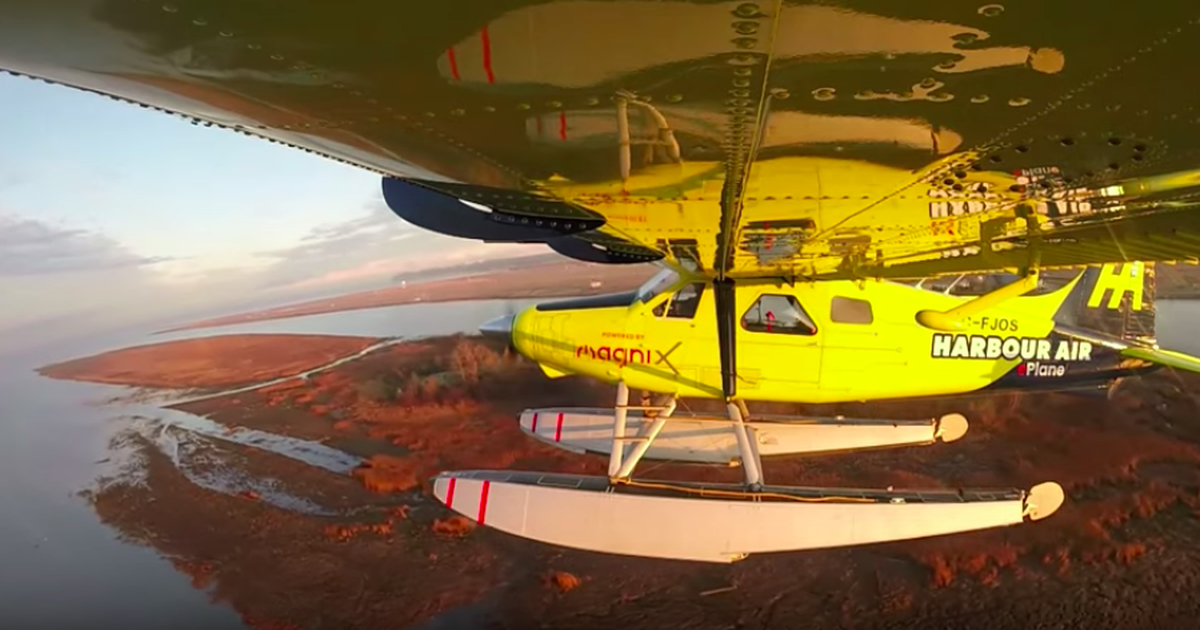 See restructuring, all electric aircraft take-off and landing in the river

Draconid meteor shower on deck: What you need to know