Is the COVID-19 vaccine waiting game almost over?

On Wednesday, pharmaceutical companies Pfizer and BioNTech announced that they had completed a clinical trial of a COVID-19 vaccine, and that data showed it was 95% effective at protecting against the virus. The companies had said last week that the vaccine appeared over 90% effective in an early analysis. Moderna also on Monday that one of its vaccine candidates for COVID-19 was over 94% effective, according to a preliminary analysis. Pfizer, a United States company, and BioNTech, a German company, are the first to complete phase 3 clinical testing for a COVID-19 vaccine, which is the final stage before a drug can be approved in the U.S.

“Everybody is excited about the light at the end of the tunnel of this pandemic,” said Dr. Graham Snyder, the medical director for infection prevention and hospital epidemiology at the University of Pittsburgh Medical Center. “Vaccines represent a part of that.”

But while Snyder said these results are indeed exciting, there are still a lot of questions left to be answered about the vaccines. Moderna’s results are only preliminary, and although Pfizer’s trial is complete, both results were published in press releases, not journals reviewed by other scientists. Until results are published in scientific journals, the most detailed data from both trials is unavailable. It’s also unclear if these vaccines prevent only the symptoms of COVID-19 or the infection itself, and whether or not the disease can still be transmitted by those who get the vaccine. With Pfizer submitting its vaccine for emergency approval in the next few days, the answers to these questions will determine not only if these vaccines are approved, but what to expect once a COVID-19 vaccine is available.

The approval process for any drug has a strict set of steps, and COVID-19 vaccines are no exception, although the process has gone much more quickly than usual. An early analysis like the one Moderna has released and Pfizer released last week, which is done while a clinical trial is still ongoing, is called an interim analysis and is a typical part of the clinical trial process. It’s conducted by a group separate from the drug’s developers in order to get an unbiased look at whether the drug seems to be working, is unsafe, or is extremely ineffective. Often, the results of these analyses aren’t even released to the public.

“We’re all on the edge of our seats for news,” said Snyder. He said vaccine manufacturers like Moderna and Pfizer are more inclined to release this type of results because people are anxious to know if vaccines like theirs will work.

Interim analyses like Moderna’s are by no means the same as final trial results, said Snyder. Moderna reported that 95 people in the trial had gotten COVID-19; the trial needs a total of 151 participants to get the disease before it can analyze the final results. Pfizer’s interim analysis reported 94 cases, but it’s since surpassed the required number of cases for the trial with 170 confirmed COVID-19 cases. Clinical trials like this one are separated into a treatment group, which receives the vaccine, and a group which receives an identical-looking but innocuous shot called a placebo. Both trials got their effectiveness percentages by comparing which group people who got sick were in — in both cases, about 95% were in the placebo group. But Moderna’s percentage could very well change as the trial continues.

There are other reasons to be optimistic about the vaccines. So far, a total of 11 people in Moderna’s trial have had severe cases of COVID-19, and all of them took the placebo. In Pfizer’s completed trial, 10 people got severe cases of the disease, and only one had received the vaccine. Both trials also had relatively mild side effects. Of the side effects rated as most severe, fatigue was the most common in both trials. Pfizer reported that a headache was the only other more severe side effect; Moderna also listed muscle pain, joint pain, and redness at the injection site.

It will be harder to convince people to take a vaccine that will hurt, Dr. William Schaffner, a professor of preventive medicine and health policy at Vanderbilt University Medical Center, told NBC news, especially since the vaccines require patients to go back for second dose. But Dr. William Gruber, Pfizer’s senior vice president of vaccine clinical research and development, said its vaccine’s side effects are on par with many other adult vaccinations, although more severe than those common with the flu vaccine. Most of the side effects for Moderna’s vaccine seemed to come after the second dose.

Both Snyder and Geoffrey Holm, a virologist at Colgate University, pointed to another significant distinction: While both vaccines must be refrigerated, Pfizer’s vaccine needs to be stored in extreme cold: minus 94 degrees Fahrenheit (minus 70 C). Moderna’s can be at slightly higher temperatures (-20 C) and will last for about a month. It can also be stored at room temperature for 12 hours. In contrast, Pfizer’s vaccine, which must be frozen, thawed to 35.6 to 46.4 F (2 to 8 C) and used within five days, has already raised logistical about its practicality in areas with less infrastructure.

Nevertheless, positive results have pleasantly surprised many, and not just because of the quick timeline. The two vaccines use a totally different mechanism from existing vaccines, said Holm. Instead of injecting a dead or deactivated version of the virus to provoke the immune system, the vaccines injects RNA, a type of genetic material, which essentially gives the body the instructions it needs for an immune response. Many researchers expected the fragile RNA to break apart and for the vaccine to not work, said Holm, and have been pleasantly surprised that this isn’t the case. Now, researchers know the method could be effective in future vaccines, too.

Holm said there was no particular reason to believe that either vaccine would stop working on account of the new mechanism. Until there’s more data on Moderna’s vaccine, though, there’s no way to know for sure if the vaccine might stop working for any reason. Data gathered from both trials even after they are technically complete will tell us more about how safe and effective the vaccines are. Both trials will continue to collect data; Pfizer has said that it will continue collecting safety and efficacy data for the next two years.

It’s also possible that the vaccine will continue to “work” fine but will prevent all or most of the disease’s symptoms, not the actual infection, said Holm. In other words, people might still be able to transmit the virus to others even after they’ve received the vaccine. Snyder said that while most vaccines protect you from being contagious, some, like the flu vaccine, do not, even if you never feel sick. If a COVID-19 vaccine only prevents disease and not transmission, things like social distancing will likely be a good idea for much longer.

“If it prevents infection and therefore potentially prevents transmission that then gives you different parameters in terms of thinking about what’s going to happen with the overall pandemic,” said Holm.

But of course, these vaccines haven’t been approved yet. Pfizer and BioNTech say they will submit the data from their completed vaccine trial to the U.S. Food and Drug Administration (FDA) for Emergency Use Authorization (EUA) in the next few days, including an average of two months of safety data, which the FDA requires for EUA. Although EUA is not as extensive a process as full FDA approval, it still requires drug developers to submit extensive paperwork on everything from safety and efficacy on all three stages of clinical trials to information on the drug’s chemistry and how it will be manufactured.

The FDA will then evaluate if the vaccine’s benefits outweigh its risks. Although the time it takes for the FDA to issue emergency approval varies, the FDA said in a guidance document that during an emergency, “an EUA will be acted upon within a matter of hours or days.”

Both developers are already planning for the potential global manufacturing and use of their vaccines. In addition to applying for EUA and eventually for final FDA approval, both Pfizer and Moderna have said they plan to submit the vaccine for approval in other countries and produce the vaccine globally.

Moderna says it will have 20 million doses ready by the end of this year, and will have manufactured 500 million to 1 billion doses by the end of 2021. Pfizer and BioNTech plan to produce 50 million doses of their vaccine in 2020 and as many as 1.3 billion next year. The U.S. government will help fund and enact the companies’ vaccine production and distribution through Operation Warp Speed, a federal program aiming to speed up the process of developing and distributing a coronavirus vaccine. Moderna has also received over $1 billion through the program to help develop its vaccine, while Pfizer didn’t receive any money for development.

Even after a vaccine is approved and available, many questions remain unanswered, namely who can receive one. Pfizer’s Dr. Gruber told that the company plans to make its first doses available to healthcare workers on the front lines of fighting COVID-19 as soon as it gets emergency approval. Groups who are at particular risk of developing the virus, like older adults and people with some medical conditions, would also likely be among the first to receive a vaccine, according to the CDC. For everyone else, timing is unclear. Dr. Anthony Fauci, the United States’ top expert on infectious disease, told Good Morning America that most people may be able to get a vaccine in April, May or June of 2021.

There’s one surprising drawback to any COVID-19 vaccine being approved. After a vaccine is available, developers are obligated to inform those who were in the placebo group that they did not receive the vaccine. If they then receive the vaccine, they would no longer be part of the trial, said Holm. It’s a troubling paradox, he said, if a necessary one. Because of this decrease in trial placebo group participants, it might be harder to gauge how effective the vaccine might be long-term, for instance if it doesn’t protect against the virus after one or two years.

It’ll also be a long time before things return to “normal,” even with a vaccine, said Holm. In a widely circulated video clip, Sir John Bell, a professor of medicine at the University of Oxford, told BBC Radio 4’s World at One that things could go back to normal by the spring. Holm said he thinks that seems unlikely. Snyder said that it’s simply too soon to say, but emphasized how important it will be in the coming months to continue to take safety precautions like wearing a mask and maintaining social distance.

Of course, Moderna and Pfizer aren’t the only companies developing a COVID-19 vaccine. There are at least 65 COVID-19 seeking FDA approval in phase 3 development alone, and nearly 300 in Snyder emphasized that the sheer number, as well as the speed at which COVID-19 vaccines are being developed, is “mind-blowingly unprecedented.”

“If that doesn’t give you a sense of optimism,” he said, “I don’t know what does.”

WATCH: How these filmmakers made a pandemic documentary during a pandemic 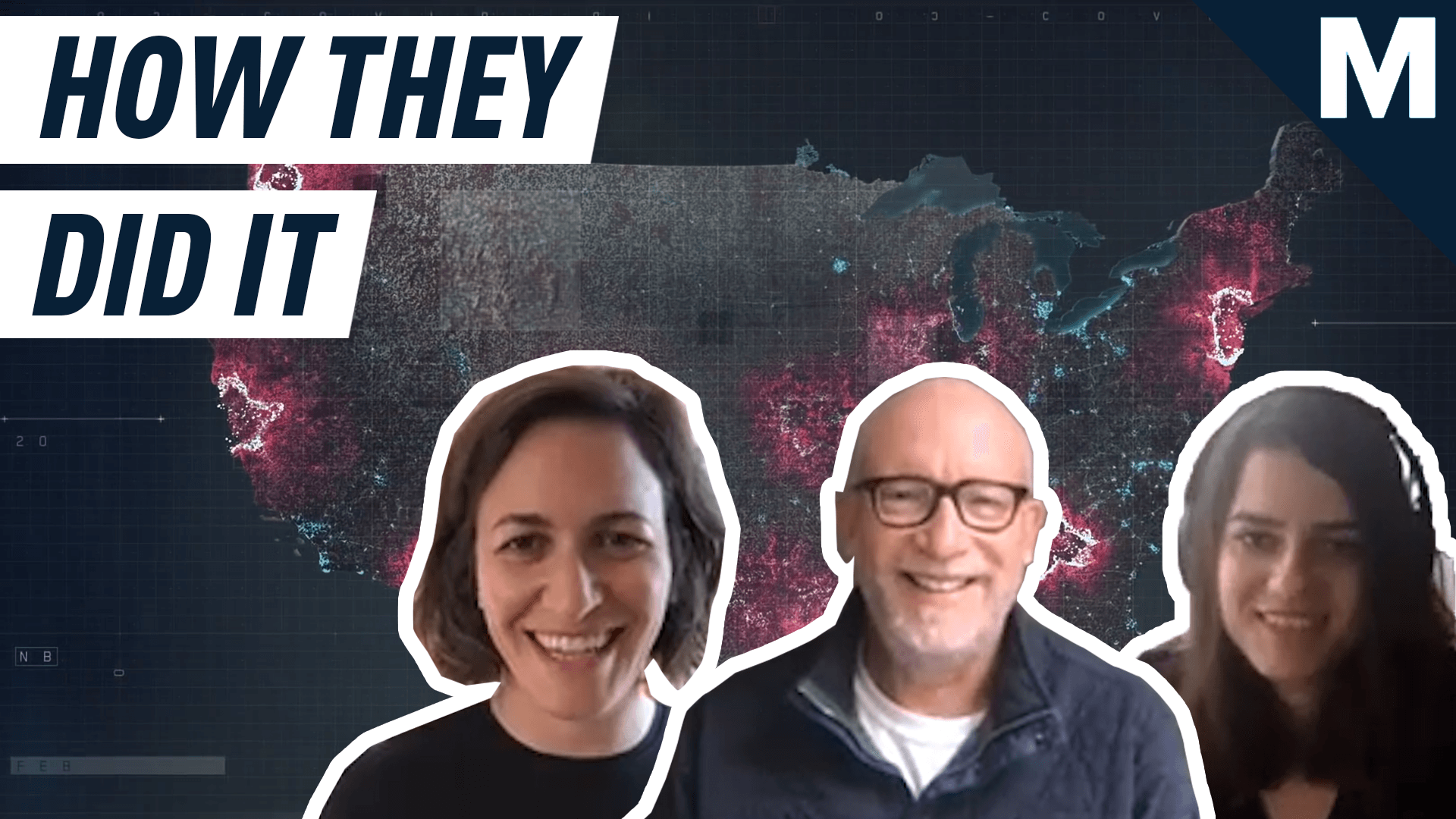