Trump, who announced Sunday, without providing evidence, that he has tested “totally negative” after his bout with the virus, plans to hold his first rally since his diagnosis was publicly disclosed, in Florida, in what risks turning into yet another super spreader event.
“I’m immune. So, the President is in very good shape to fight the battles,” Trump said on Fox’s “Sunday Morning Futures,” in comments that misrepresented his own capacity to spread the virus if he is exposed to it again. A tweet along the same lines earned a warning from Twitter that the President was spreading misleading information about the virus. The President’s proclamations about his own health followed another opaque memo from his physician, who cleared Trump to end isolation but who hasn’t taken reporters’ questions in a week.

Trump’s Monday rally and subsequent events this week in Pennsylvania, Iowa and North Carolina will underscore both his increasing concern about his own prospects, as time to rescue his presidency runs out, and how his own infection with Covid-19 has done nothing to convince him to adopt a more responsible attitude toward the pandemic.

He heads to Florida after University of Minnesota infectious disease specialist Mike Osterholm warned Friday on CNN that the Sunshine State could soon be like a “house on fire” after dropping most precautions needed to quell the spread of the virus. The state added 5,000 new cases over the weekend. Trump’s rallies are habitually packed and feature little mask wearing in violation of his own government’s guidelines. At least nine people who attended a Trump rally in Minnesota last month have tested positive.

Further underscoring how Trump puts his own political goals ahead of his duty to lead the emergency response, Dr. Anthony Fauci on Sunday objected to being misrepresented by a Trump campaign ad hailing the President’s pandemic leadership.

The ad creates a false impression that Trump’s handling of a virus that has killed 214,000 Americans has been a famous success, and features Fauci saying, “I can’t imagine that anybody could be doing more.”

The government’s top infectious disease specialist told CNN that the comments, which were made during a March Fox News interview, were used without his permission and were ripped out of context.

“In my nearly five decades of public service, I have never publicly endorsed any political candidate,” Fauci told CNN.

But Trump, who has consistently marginalized public health officials who advocate science-based approaches to the pandemic, shot Fauci down in a tweet in an apparent attempt to mitigate public dissatisfaction with his own leadership. His handling of the pandemic appears to be driving his poor performance in polls in an election that’s already underway. Democratic nominee Joe Biden is ahead by 11 points in CNN’s Poll of Polls as of Sunday, while more than 7 million Americans have already voted.

“They are indeed Dr. Fauci’s own words. We have done a ‘phenomenal’ job, according to certain governors. Many people agree…And now come the Vaccines & Cures, long ahead of projections!” Trump tweeted.

The President’s new attempt to create an alternative reality about a pandemic that he first ignored, then downplayed and ultimately mismanaged, comes as experts warn of a dire fall and winter ahead.

The virus is now trending up in 31 states and is receding in only three, according to Johns Hopkins University. On Saturday alone, there were more than 54,000 new infections recorded with a further 618 deaths. The high baseline of cases means that a coming spike could be even more serious than the viral storm that raged through the northeast and the south in the spring and summer.

The latest forecast from the Institute for Health Metrics and Evaluation at the University of Washington School of Medicine projects that there could be nearly 395,000 US coronavirus deaths by February 1.

In a tweet on Monday morning, Trump minimized the threat and gloated over a rise in cases in European nations that did a better job of suppressing the virus than the US and did enjoy something of a respite over the summer but are seeing the pandemic return with a vengeance now.

“Big spike in the China Plague in Europe and other places that the Fake News used to hold up as examples of places that are doing well, in order to make the U.S. look bad. Be strong and vigilant, it will run its course. Vaccines and cures are coming fast!” Trump tweeted.

In a volley of appearances with conservative media late last week and over the weekend, Trump pressed home his false narrative about the crisis. Two weeks after holding a superspreader White House event to highlight the Barrett nomination, Trump held forth to a crowd of hundreds on the South Lawn on Saturday.

“It’s going to disappear, it is disappearing and vaccines are going to help,” Trump said.

“We are learning to deal with the virus in a targeted, safe, preventive way,” Kudlow told CNN’s Jake Tapper on “State of the Union” while promoting a new call for an economic stimulus package that has already been rejected by House Democrats and a group of Senate Republicans.

Trump’s experience with the virus — albeit with emergency therapies not available to other Americans — has played into his conceit that it is not that serious and that it should not “dominate” regular life. While the overwhelming majority of those infected will get better, the disease has been fatal for several hundred thousand Americans and caused complications for many others. The President’s prescription for getting back to normal — encapsulated by a lack of mask wearing and social distancing at his rallies — not only risks infecting tens of thousands in the coming months. It also threatens to overwhelm hospitals again and therefore to leave many victims without proper treatment.

The President’s return to the campaign trail is being driven by necessity. Multiple national polls have him falling further behind Biden nationally and in swing states following his boorish performance in the first debate and his own diagnosis with the disease, which has deepened public perceptions that he has botched the crisis.

A Washington Post/ABC News poll Sunday showed Biden at 54% among likely voters nationally and Trump at 42%. It was the latest survey to show the Democratic nominee with a double-digit lead. CBS polls of Michigan and Nevada showed Biden up 6 points in each state. And the rivals are tied at 49% in Iowa — a state Trump had expected to not have to worry about.

In the ABC/Washington Post poll, nearly 6 in 10 people disapprove of the way the President is handling the pandemic.

Trump will hit the road after the White House physician, Navy Cmdr. Dr. Sean Conley, issued a statement on Saturday night that said the President was “no longer considered a transmission risk to others,” although it didn’t say he had tested negative. The White House is also still refusing to say when the President last posted a negative test before he got sick — information that would help establish whether he knowingly traveled to campaign events without precautions to safeguard others while contagious.

Biden used a campaign swing through Pennsylvania on Saturday — a state that Trump won in 2016 but where the Democrat is currently leading — to try to win over disaffected Republicans and independents.

“I’m running as a proud Democrat, but I am going to govern as an American president,” Biden said, touting the endorsement of the Keystone State’s popular former Republican Gov. Tom Ridge.

Republicans hope Barrett’s confirmation hearings, which begin in the Senate Judiciary Committee on Monday, will supercharge base turnout in three weeks and compensate for the President’s dipping poll numbers.

The hearings will be an important moment for Senate Judiciary Chairman Lindsey Graham, a South Carolina Republican facing an unexpectedly tough reelection. Democrat Jaime Harrison announced on Sunday that he had raised $57 million between July 1 and the end of September, shattering the quarterly fundraising record for a Senate candidate. Democrats accuse Republicans of stealing the Supreme Court seat vacated by the death of the late Justice Ruth Bader Ginsburg, ushering in an unassailable conservative majority. And they say Senate Majority Leader Mitch McConnell of Kentucky is guilty of hypocrisy after pressing ahead despite refusing to confirm President Barack Obama’s nominee Merrick Garland in an election year.

Democrats are demanding that Barrett recuse herself from any cases that arise out of an election that Trump appears determined to dispute. On the eve of the hearings, they talked up the possibility that Barrett could vote to overturn the Affordable Care Act with the court due to hear a case on the administration’s bid to finally kill the law the week after the election.

“This nominee poses a clear and present danger,” Democratic Sen. Mazie Hirono of Hawaii said on “State of the Union.”

“The immediate danger is to the health care of over 20 million Americans who have health care thanks to the Affordable Care Act, the over 100 million Americans who are protected under the Affordable Care Act because they have preexisting conditions, not to mention the seven million who have tested positive for Covid, who will be put into the category of those with preexisting conditions.” 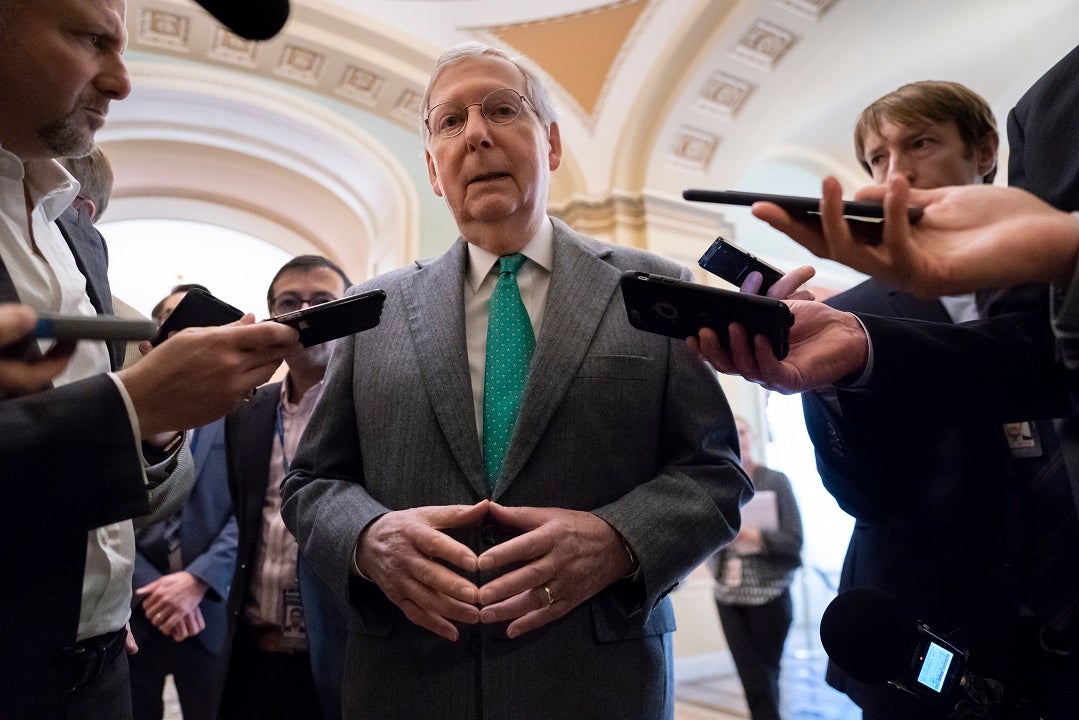