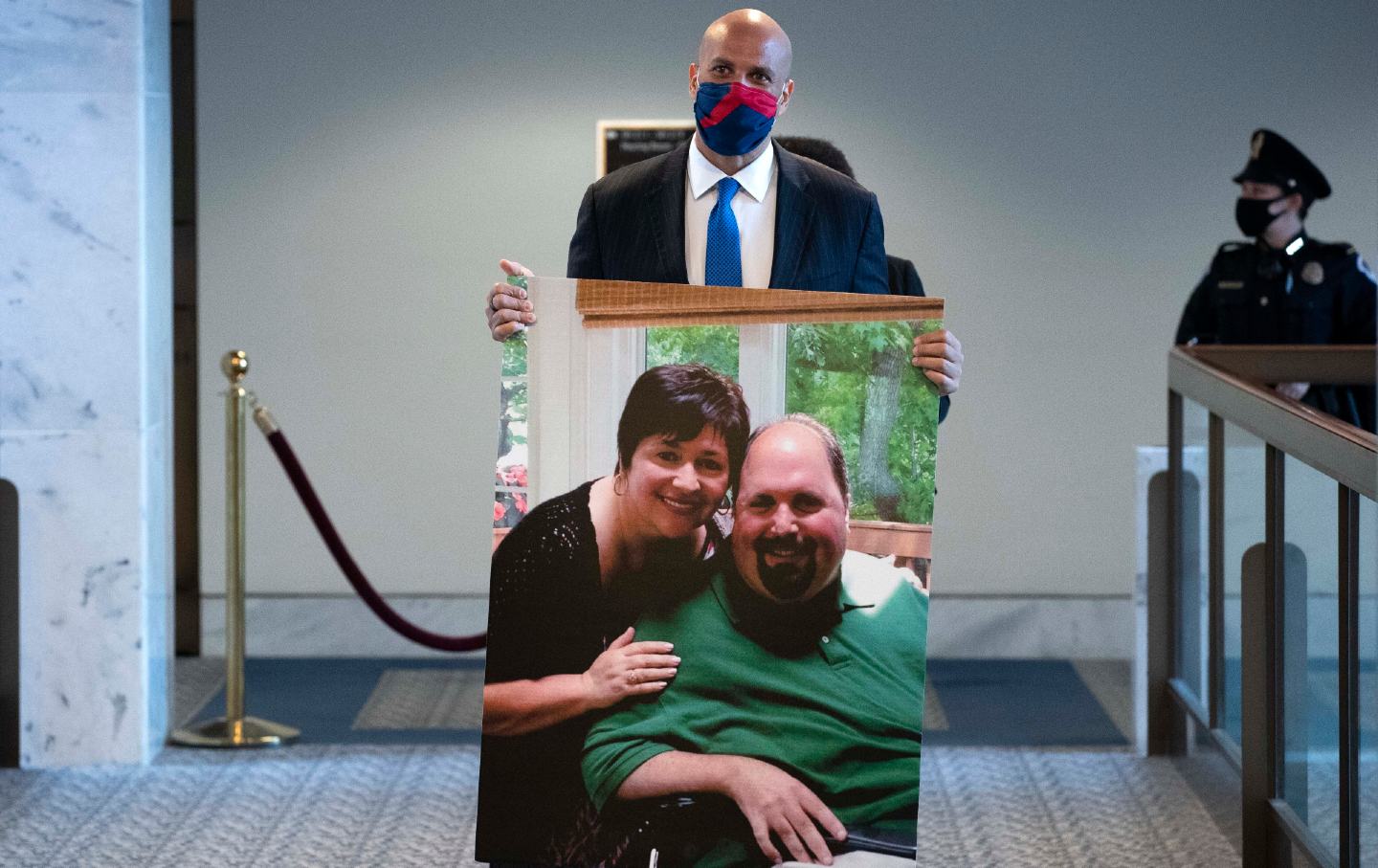 Senator Cory Booker (D-N.J.) walks to his office as he holds a photograph of people who where saved by the Affordable Care Act, after the confirmation hearing of President Donald Trump’s Supreme Court nominee Amy Coney Barrett, at the Supreme Court in Washington on Monday, October 12, 2020. (Jose Luis Magana / AP Photo)

tacThe first day of the Amy Coney Barrett confirmation hearings featured opening statements from all the Senators on the Senate Judiciary Committee and from Judge Barrett. It was, as Gandalf the Grey might say, the “deep breath before the plunge”—a day of posturing before question and answer battles on Tuesday and Wednesday. 1

The Republicans, however, seemed to have lined up their forces in anticipation of the wrong battle. Of the 12 Republican members on the Senate Judiciary Committee, I counted nine who excoriated the Democrats for their attacks on Barrett’s faith and religious affiliation. Except, those attacks never came. None of the 10 Democrats on the Committee even mentioned Barrett’s religion in their opening statements. Instead, the Democrats used their time to focus on health care. The Supreme Court is set to hear a case on November 10 that could strike down the Affordable Care Act. Barrett has written that she believes the Supreme Court erred in upholding the constitutionality of the ACA in the past. Democrats, to a Senator, brought pictures of people who will likely lose their health care should Barrett be confirmed, and told stories about their lives. It was a day of message discipline from the Democrats that we don’t usually see. 2

By the middle of the day, even Donald Trump was tweeting about health care, lying, as he often does, about having a “better” health care plan that will be cheaper than the ACA and protect pre-existing conditions. Again, the man has been president for almost four years, yet no legislation regarding his alleged health care plan has even been authored. 4

By the end of the day, even the Republican legal establishment was roped into defending the ACA. Their go-to hack, Jonathan Turley, was on Twitter arguing that the ACA is not in danger because Chief Justice John Roberts and alleged attempted rapist Brett Kavanaugh are likely to rule that the law is severable from the individual mandate, and thus would survive Republicans declaring the individual mandate unconstitutional. Left unsaid was Turley’s acknowledgment that three conservatives—Justices Clarence Thomas, Samuel Alito, and Neil Gorsuch—are likely to rule against the ACA regardless; that Barrett is likely to rule much more like Thomas and Alito than Roberts; and, in any case, that no woman should have to rely on Kavanaugh’s interpretation of the law to see if they are going to have access to health care. Elevating Barrett to the Supreme Court puts the ACA in even greater jeopardy than it already is, and only the most intellectually dishonest or ignorant among us are trying to tell people otherwise. 5

This approach is the opposite of the tack taken with Kavanaugh. In that instance, the would-be justice was of such dubious character even before the attempted rape allegations came out—remember, Kavanaugh showed up at the hearings with unexplained debts and unexplained lies he told in previous confirmation hearings—that Democrats had to question his moral fitness for the Supreme Court. Republicans didn’t care then, and they still don’t. But it’s worth noting that Kavanaugh has the highest unfavorable ratings of anybody on the court. 8

In this case, there’s no point in making anyone dislike Barrett. She’s probably likable, if you like people who think that only cis-hetero white men deserve rights. At the very least, she probably won’t scream at senators and threaten political retribution. I doubt she has sexually harassed or assaulted anybody, which is something you can’t say about 40 percent of the Republican-appointed justices currently serving on the Supreme Court. 9

Still, a majority of Americans want the winner of this presidential election to pick the next Supreme Court justice. The Democrats’ decision to focus on the corrupt things Republicans want Barrett to do on the court, ruling on cases between the election and the inauguration, is therefore probably the right strategy. 10

Unfortunately, I do not think it’s enough. The fact that we’re having a hearing at all normalizes the illegitimate and blatantly corrupt process the Republicans have engineered by putting forward a nominee in the first place. The Democrats, while staying on message, fundamentally sounded normal during what was a completely abnormal event. Senator Mike Lee was present at the hearing and spoke without a mask, despite having tested positive for Covid-19 less than two weeks ago. He’s a disease vector but, with a few exceptions, Democrats pretended that sharing an enclosed space with a functional bioterrorist was just a normal thing to do in 2020.11

Remember, this whole hearing is happening while the Senate is in recess to protect people from the fallout from the super-spreader event the Republicans organized to celebrate Barrett last month. The Republicans are refusing to work on a relief bill but some are remoting into a hearing to confirm a woman who will take away health care from people who can’t afford the life-saving rage-cocktail Trump received when he got sick. 12

Democrats have the moral and scientific high ground, but to stop the Barrett confirmation, they’re going to need something more than being right. Senator Amy Klobuchar spoke to what was needed near the end of her statement. She said: “To all Americans, we don’t have some clever procedural way to stop this sham, to stop them from rushing through a nominee. But we have a secret weapon that they don’t have… I doubt that it will be a brilliant cross-examination that is going to change this judge’s trajectory this week. No. It is you.” 13

Klobuchar is right. At some point, the people themselves have to rise up and try to put a stop to this thing. Lindsey Graham, John Cornyn, Thom Tillis, and Joni Ernst are all on the Senate Judiciary Committee, and all are up for reelection right now. If you live in South Carolina, Texas, North Carolina, or Iowa respectively, you must call these people. All you have to do is call the capitol switchboard, 202-224-3121, to be redirected to their offices. Then call up your “I don’t like to talk about politics” friends and make them call. You must make them know that there will be a political price to pay for rushing through this nominee. (And if you don’t live in one of those states, it’s still worth calling your Senators. I’ve called mine, both of whom are Democrats, just to remind them that I expect them to hold the line.) That’s really the only way to stop this thing.14

The Democrats are not having a confirmation hearing to try to change the mind of Republicans. That ship has long since sailed. They’re participating in the hearings to try to inspire actual citizens to fight for their own democracy. 15

I don’t know if that will work. I don’t yet know if I’m in Hamilton, and these colonies actually will rise up, or if I’m in Les Misérables, and I’ll be left to die on the barricades as people cower in their homes. I guess we’ll all find out together this week.16

Sources say that the Russian probe transcripts, confirmation of the officials came up empty on collusion:’Schiff is in panic mode’

Jon Meacham in his own words about the importance of voting

Poll: 80%of Americans think the country is losing control