Sheldon Adelson had little use for regret.

During the Republican primaries in 2012, the billionaire mega-donor and his family sent a $5 million check to longtime ally Newt Gingrich’s super PAC to help him keep up with Mitt Romney, whose style of politics didn’t exactly mesh with Adelson’s. The cash allowed the Gingrich camp to buy a film attacking Romney’s business practices, helping force Romney into a protracted primary. The Adelsons continued unloading their arsenal on Romney, dumping another $11 million into the effort to deny him the Republican Party’s presidential nomination.

But when it became clear Gingrich couldn’t overpower Romney—Gingrich would ultimately win only South Carolina and Georgia—the Adelson clan switched gears in a coldly pragmatic pivot. They were suddenly in Romney’s corner, writing $20 million in checks to a pro-Romney super PAC. Adelson so desperately wanted to defeat incumbent President Barack Obama that he indicated he would do whatever it took, even if that meant setting aside his previous misgivings about Romney’s candidacy. In all, the Adelsons spent more than $150 million that cycle to boost Republican causes.

Adelson’s largesse and ruthlessness gave the casino mogul, who died on Jan. 11 at age 87, an almost unrivaled influence over American politics. He was a self-made man whose net worth topped $35 billion at the time of his death. For almost two years, the casino magnate had been publicly battling non-Hodgkin’s lymphoma. Just last week, he announced he had taken a leave of absence from his company, the Las Vegas Sands Corporation, to restart treatment. His company said in a Jan. 12 statement that Adelson died of complications from treatment for non-Hodgkin’s lymphoma.

At his peak—along with his second wife, Miriam—he was a coveted donor to political candidates, who were frequent visitors to his offices in his Venetian resort towers on the Las Vegas Strip and a pair of Adelson estates just outside the city. Would-be candidates took turns pitching him on their pro-Israel stances during annual meetings at his glitzy resort. Just days after being named Romney’s running mate, then-Rep. Paul Ryan was inside the Venetian to get a once-over by Adelson and his like-minded super-donors. 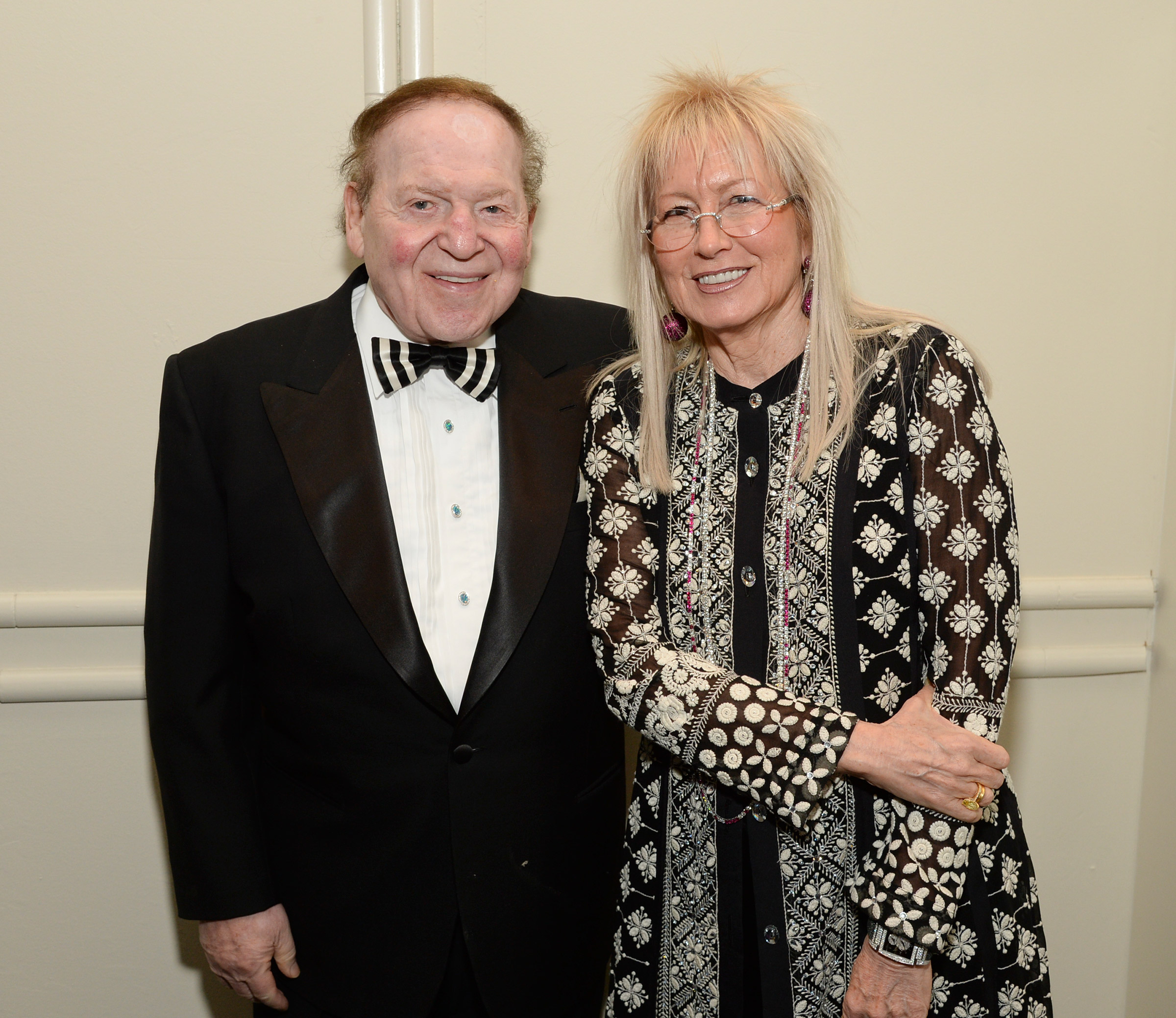 “We have lost one of the most consequential figures in American Jewish history: an American patriot, a dedicated defender of Israel, an extraordinary philanthropist and a dear mentor and friend,” Republican Jewish Coalition executive director Matt Brooks and chairman Norm Coleman said in a joint statement. “A strong defender of Israel, Jewish life and American opportunity and freedom has departed the Jewish community and the American political scene.”

Sheldon Gary Adelson grew up in a one-room Boston tenement, the son of a taxi driver and seamstress. As a Jewish kid in an Irish-Catholic town, he was often bullied and on the defense, an experience that taught him the value of a counter-punch. From an early age, he showed a streak of entrepreneurship and appetite for risk. His first business was selling newspapers and candy, which he later developed into a vending-machine business.

After two unsuccessful attempts at college, Adelson enlisted in the U.S. Army. (He would later say he regretted not serving in the Israeli armed services.) After his service, he started business after business. Some were successful and others lost him a fortune. He sold ads for trade publications, bundled soaps and shampoos for hotels, bought real estate. His temper was legendary and patience in short supply. His constant risk-taking left him broke.

It wasn’t until 1979, at age 46, that a durable idea landed. With so many personal computers making their way into homes, he had the notion that the computer industry should come together in Las Vegas for a trade show. It launched and became a must-hit stop on the convention circuit. In 1995, Adelson and his business partners sold the trade show to Japanese software developer Masayoshi Son for $800 million. (Adelson’s own children subsequently sued him, arguing that he had swindled them in a stock buy-back that paved the way for the sale. A judge said Adelson was “a harsh, demanding, unfeeling, successful businessman” who, nonetheless, had not cheated his kids.)

The conference had given Adelson an introduction to Sin City that sparked his the next logical step: to develop the country’s largest exhibition space and hotel rooms to match. He bought the former Sands Hotel in 1989 and started what would become the Venetian complex that now stands on Las Vegas Boulevard. In 1996, he leveled what remained of the Sands and started building a replica of Venice, where he went on his honeymoon with Miriam.

But unlike Italy’s original, this one was set in the Nevada desert and came with a long-entrenched political inertia. A bitter dispute with the powerful Culinary Union followed the Venetian’s groundbreaking. Adelson, who had given to Democratic causes until 1996, refused to let his employees unionize. Pickets and protests followed. Lawsuits yielded millions in liens against the project. Adelson, who had a penchant for legal disputes, kept fighting. In the process, he drifted into welcoming Republican arms.

He would need that fighting spirit as he set out to build a global empire. His expansion to Macau brought tremendous wealth to his Sands Corporation, the parent company of the Venetian complex. At one point, his personal wealth was growing at a rate of $1 million an hour. But it also brought heightened scrutiny back in the U.S. In 2016, he reached a $9 million settlement with U.S. government regulators over alleged bribery of officials in Macau and China.

As his wealth grew, Adelson became a kingmaker both at home and in Israel. By the end of his life, Adelson had a direct line to Trump and Israeli Prime Minister Benjamin Netanyahu alike.

During the last three White House races, the Adelson family was the single largest political donor in the U.S. He stayed on the sidelines of the 2016 GOP primary—even as candidates eagerly courted him—still a bit stung by his almost $100 million loss in 2012. But once Trump seemed the inevitable nominee, Adelson engaged with the campaign and built a solid rapport with the future President and his inner circle. Giving $25 million to the Trump 2016 campaign, Adelson’s family emerged as the biggest backer for the then-businessman. He also was the single largest donor to Trump’s inauguration committee. And, when Trump and his team got into trouble, he donated to a legal defense fund set up for Trump aides caught up in Special Counsel Robert Mueller’s probe.

In turn, Trump met with Adelson just hours after a Las Vegas massacre unfolded in 2017 on the Strip and Adelson advised the President on his Middle East policy. Adelson was pleased with Trump’s move of the U.S. Embassy from Tel Aviv and into Jerusalem, ending any ambiguity about U.S. policy about the fate of the city in peace talks. A year later, after the Adelsons had given $87 million to help Republicans in the 2018 midterm elections, Trump awarded Miriam Adelson the nation’s highest civilian honor, the Presidential Medal of Freedom. The citation credited her research on narcotic addiction, work against substance abuse and support for Jewish organizations.

By the time 2020 arrived, Adelson was still giving freely. Last year, the Adelsons gave $430 million to conservative groups, including $90 million to a pro-Trump super PAC.

Adelson’s largesse bought him access and influence but also drew intense scrutiny that may have led him to become a media mogul himself. With a proclivity to threaten lawsuits over critical coverage and a refusal to do interviews unless he knew all of the questions in advance, the Adelsons used a shadow corporation to buy the Las Vegas Review Journal in 2015. Many staffers departed, citing heavy-handed editing away from critical coverage of the Adelsons or the Sands Corporation. The Adelson family also owns newspapers in Israel, where thousands of Jewish young people visit every year through Adelson-supported 10-day Birthright Israel trips.

Still, it will be the politics that will be Adelson’s legacy to most Americans’ minds. Few have wielded so much influence inside the Republican Party without having run for office. Adelson proved his ability to bankroll candidates, campaigns and causes of his liking. Forbes estimates he spent more than $1 billion funding such projects over the course of his lifetime. But his legacy will be more than raw dollars. It will be at the vanguard of a new era in U.S. politics when the ultra-rich can determine the shape, tenor and rules of elections.

Trump officials emphasize that coronavirus ‘Made in China’