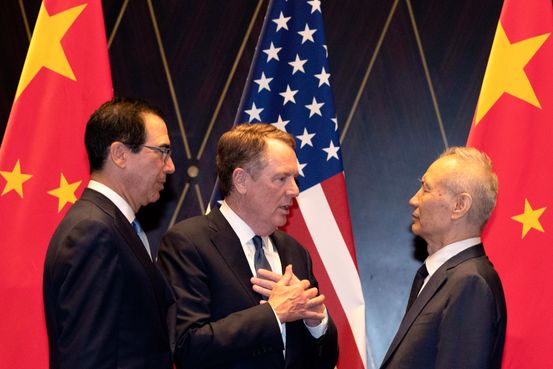 WASHINGTON—Senior U.S. and Chinese officials said they were committed to carrying out the phase-one trade accord between the two nations, the two governments said, after the two sides discussed the pact Monday evening U.S. time.

The videoconference brought together U.S. Trade Representative Robert Lighthizer, Treasury Secretary Steven Mnuchin and Chinese Vice Premier Liu He for a formal review of the trade deal signed in January. The trade representative’s office released a one-paragraph summary of the talks, which it said included discussions of “significant increases” in the purchases of U.S. products by China.

Talks also reviewed steps Beijing had taken to protect American intellectual property and liberalize China’s market for financial services, according to the statement. “Both sides see progress and are committed to taking the steps necessary to ensure the success of the agreement,” it said.

But the USTR statement made no mention of any subjects that China planned to bring up. Those included concerns over the intensifying U.S. actions against Chinese technology firms. In recent days, the Trump administration has threatened bans on the TikTok app owned by Chinese internet company ByteDance Ltd. and Tencent Holdings Ltd. ’s WeChat.

A statement published by China’s official Xinhua News Agency said the two sides had “a constructive dialogue on strengthening bilateral coordination of macroeconomic policies and the implementation of the phase-one trade agreement.”

Coronavirus and technology supply chains: How to restart and rebuild