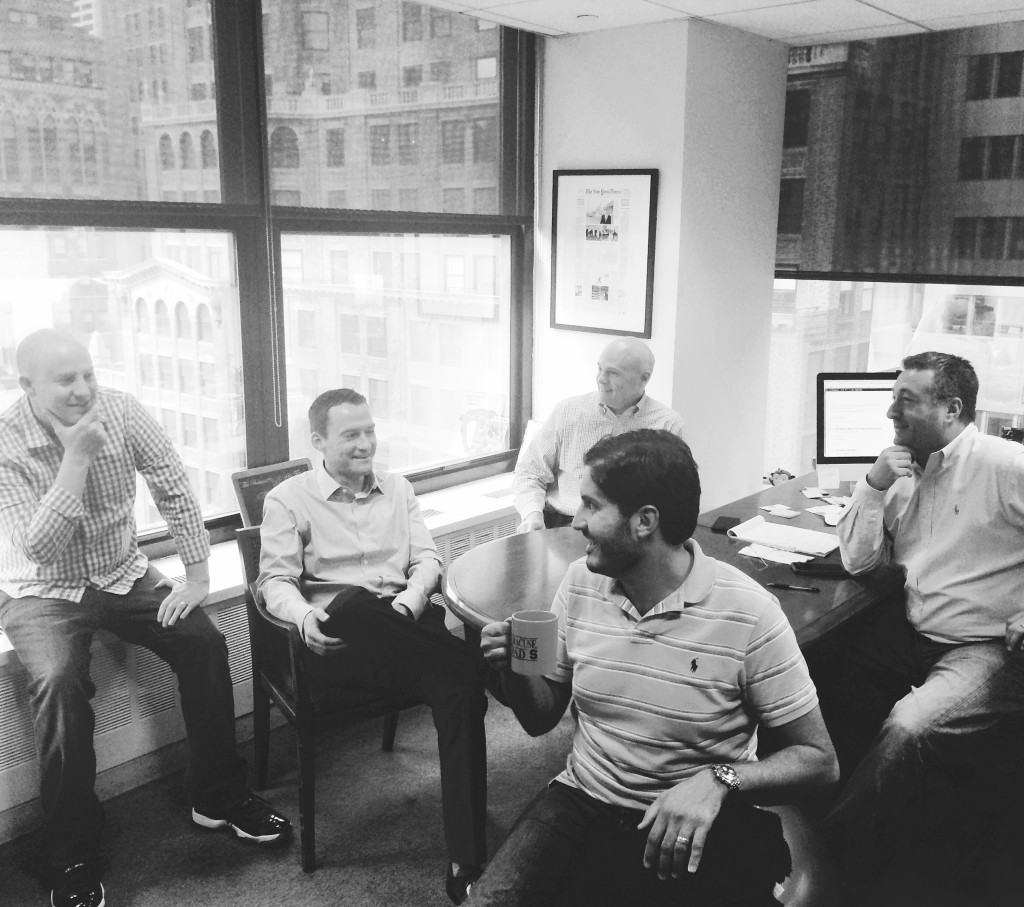 The old office on Park Avenue, photography by JB

7 years ago today, I opened a large purple rolling suitcase in my office, packed my dual monitor, 32 Gigs of RAM Hewlett Packard PC — it had MS Office, Firefox, a Bloomberg terminal, and all of my Word docs on it — and quietly departed my (soon to be prior) employer’s office. I took the elevator to the street, exited the building on 44th near 5th for the last time — and then rolled that eight month old PC over our to new offices at 90 Park Avenue South between 39th and 40th Street.

I had needed a new PC for about 2 years — it was old, constantly crashing, and you could run any MS Word, Excel, and Chrome, Firefox or the Bloomberg terminal — just not at the same time. Launch more than 2 and eventually, it froze.

Despite my incessant whining, I could not get the office to pay for a new one. Finally, out of desperation — and really to shut me TF up — our CFO Joe (nice guy doing an impossible job), suggested I buy one myself and the firm would reimburse me. That was about 10 months before we departed.

A few days after we left, he and I talked over the phone to discuss terms. He said he was disappointed I would take company property . . . I laughed — and reminded him that despite months and months of expense reimbursement requests, the company had not paid for my work PC. He didn’t believe it until he did a search on expense reimbursements, and — “dammit, your right, B” — it was my PC.

They did us a huge favor.

If this were a movie, after that (boring) opening scene, “One year earlier” would flash on the screen before the dissolve into a scene involving Josh and I talking. Hotheaded, I am insisting we MUST depart, the sooner the better. while he says the numbers do not work with 30, 40, 50 million in AUM in NYC. He had run BDs with a 100 employees, so he understood the math. “We get closer to $100m, we can make the numbers work,” he counseled.

So that was what we did.

Me, Josh, Kris and Michael left on the 15th of September, 2013  — literally waiting until our paychecks cleared before leaving. I called our boss from the new office and told him the news. To say he was shocked is an understatement.1

Since then, it has been nearly all upside surprise.

The plan was Josh and I would do the media, Kris would manage the clients, Batnick was the utility fielder who could play any position. I was not worried at all, something that sparked some concern from the Josh and Michael. Kris was even more optimistic than I was. We covered the full spectrum from full on risk embrace to concerned risk aversion. But everyone was onboard,

Freed from foolish rules and conflicts and oversight of a management team that did not at all “get us,” everybody blossomed.2  I mean everybody: Josh began doing much more media, and soon after became a regular on CNBC, eventually landing a spot on Halftime Report. His blog blew up, and he recognized very early on what social media could become. Kris created from scratch an entire system for onboarding new clients applying what he studied at Wells Fargo. It is the very heart of the company today, and a huge reason for our success. Michael became a CFA, finishing his level 2 and 3 exams. I rely on his insight and counsel across too many areas to list. He is my Jiminy Cricket. Oh, and then he launches a smart, insightful blog, and then a podcast with Ben, Animal Spirits, that is fun and funny and informative and useful. He just keeps growing professionally.

Speaking of more upside surprise: Ben is the finest data-based financial writer publishing today. He manages our institutional business, sits on our investment committee, and is a knowledgable voice of reason. We expected good things from Ben, and he still managed to surprise us.

Bill was hired as an advisor, but was hungry for more responsibility, and kept taking whatever was dished out onto his plate. He is key to so many initiatives and projects I lose count. When we realized we needed a CFO, it was the easiest personnel decision we ever made.

Except maybe the next one: Having a data scientist is an incredible luxury, but one who can run operations, understand system processes, manage special projects, and, oh, write with the best of them is an incredible bonus. Thats why we made Nick both Chief Operating Officer & Data Scientist. More upside surprise.

I could do this for all 32 people in the firm — its the 1927 Yankees’ Murderers Row. Every position can hurt you from the plate, each player can astonish you with something unexpected in the field. Erika turned a rag tag group of well-meaning series 65 licensees (the four of us) into a professional firm: She moved us to the cloud from day one. She made remote office work possible, years before it was fashionable. She anticipated we would all need to WFH. The work she does (with Catalina and Justin) is where the rubber meets the road for the firm. Patrick and Dylan manages an unbelievable amount of client allocations and rebalancing and track billing and so much more. They are the key to so much of our back office operations running smoothly.

I’ve only mentioned 10 people, and I am already at 1000 words. If I don’t stop here, this will become 5,000 words. So I apologize for having to halt abruptly, but everyone here hopefully knows exactly how I feel about them.

Giving employees clear goals and targets as to what their responsibilities are, and the tools they need to accomplish those goals — and then getting the hell out of their way — is a strategy that has worked for us.

It has been all upside surprises, across the entire firm.

1. The first week of September, the boss and I had a long lunch where I explained to him what he needed to do to right the ship — the partners he needed to cut loose, what employees were unproductive, the business model he needed to embrace, where he should focus his skills. My group accounted for 110% of the firm’s growth, yet we still had to fight for supplies and offices. Not that he recognized it, but it was my farewell and I hoped he took the advice as it was sincerely offered.

2. You already know my story, I moved to Bloomberg View, and set up the Masters in Business podcast on Bloomberg Radio.