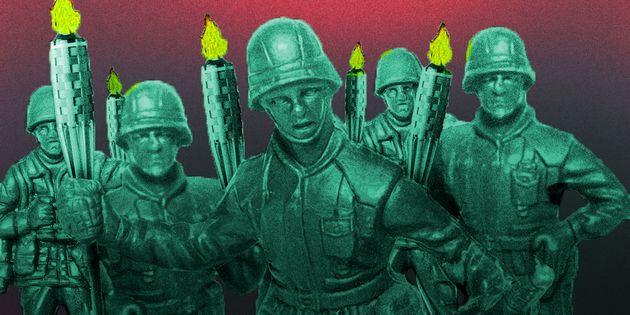 A new Pentagon report describes the threat posed by extremists in the military.

A new bill introduced in the House seeks to improve the U.S. military’s ability to prevent white supremacists from joining its ranks.

The “Shielding our Military from Extremists Act” was introduced on Thursday by Rep. Pete Aguilar (D-Calif.), his office confirmed. The measure would require the Secretary of Defense to adapt a series of recommendations made in an October 2020 Pentagon report on how to keep “domestic extremists,” namely white supremacists, out of the U.S. armed forces.

The recommendations in the Pentagon report — a copy of which was obtained by HuffPost — include giving the Department of Defense access to the FBI’s database of extremist tattoos and creating clearer security clearance questions about white nationalism.

Aguilar told HuffPost he thought the Pentagon report “made clear that white supremacists are using our military to further their hateful and violent agenda, from acquiring training to recruiting new members — they’re joining our armed forces with dangerous motives.”

“And while we have systems in place to safeguard against this,” Aguilar continued, “we need more collaboration between agencies, like the DOJ, and FBI to make sure that we’re keeping extremists from our service members and from our community members.” 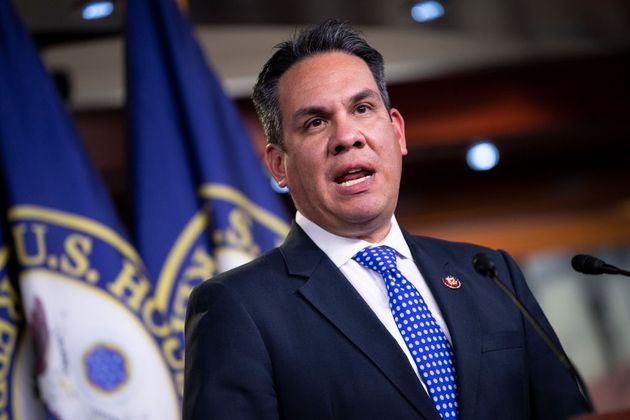 Rep. Pete Aguilar (D-Calif.) speaks during a news conference on Capitol Hill in Washington on May 27, 2020.

Aguilar’s legislation comes amidst heightened attention on the danger posed by extremists in the military, who can be a threat to their fellow service members and receive combat training they can use to inflict violence on civilian targets.

A recent analysis from NPR found that 15% of the 230 people charged in relation to the violent Jan. 6 insurrection in Washington, D.C., were current or former military members.

Secretary of Defense Lloyd Austin — appointed by President Joe Biden and the first Black American to hold that role — recently took the extraordinary step of issuing a 60-day stand down order, requiring each branch of the military to pause operations to discuss the problem of extremism in the armed forces.

Pentagon spokesman John Kirby described the Jan. 6 riot, during which supporters of former President Donald Trump stormed the Capitol, as a “wake-up call” for the Department of Defense. He also added that the FBI had opened 68 investigations into troops and veterans in 2020 for domestic extremism.

Last year Aguilar, the congressman, wrote an amendment into the National Defense Authorization act requiring the Department of Defense to issue an “annual accounting and detailing of every incident of white supremacist activity” in the military.

The resulting report by the Pentagon, sent to the House Armed Services Committee in October 2020, simultaneously recognizes the danger posed by fascists in the military — calling servicemen “highly prized” recruits for white supremacist groups — while acknowledging the struggle to adequately screen an annual average of 400,000 military applicants for extremist beliefs.

The report also cites a series of HuffPost investigations exposing a dozen U.S. servicemen as members of the white nationalist group Identity Evropa.

Ultimately, the report makes seven recommendations, including that military recruiters have access to the FBI’s database of extremist tattoos, to help them recognize more obscure fascist logos on potential enlistees; and that Department of Defense officials be offered an unclassified version of the FBI’s Ethnically Motivated Violent Extremism training program, in order to better spot extremists trying to join up.

It also recommends revising specific questions on security clearance applications to more precisely ask recruits and their neighbors if they have ever been affiliated with domestic extremist groups, arguing that the current language — which asks vaguely about “terrorism” — isn’t precise enough.

The report also calls for exploring ways to work with data companies to mine potential recruits’ social media accounts for evidence of extremism, but acknowledges that concerns about civil liberties will have to be addressed first.

Perhaps most interestingly, the report recommends that the Defense Department “collaborate with pertinent governmental stakeholders to develop a specific definition for (domestic extremism) across the whole of government,” raising the prospect of heated battles over what political groups constitute a threat, and which don’t.

Aguilar’s bill would codify all of the Pentagon’s recommendations into law “to ensure that future administrations are also bound to perform the same due diligence in screening enlistees,” he told HuffPost.

What the legislation does not address, however, is how the military disciplines — or does not discipline — those already serving in the military with ties to domestic extremism. As HuffPost has documented, the military sometimes allows white nationalists to remain in the service.