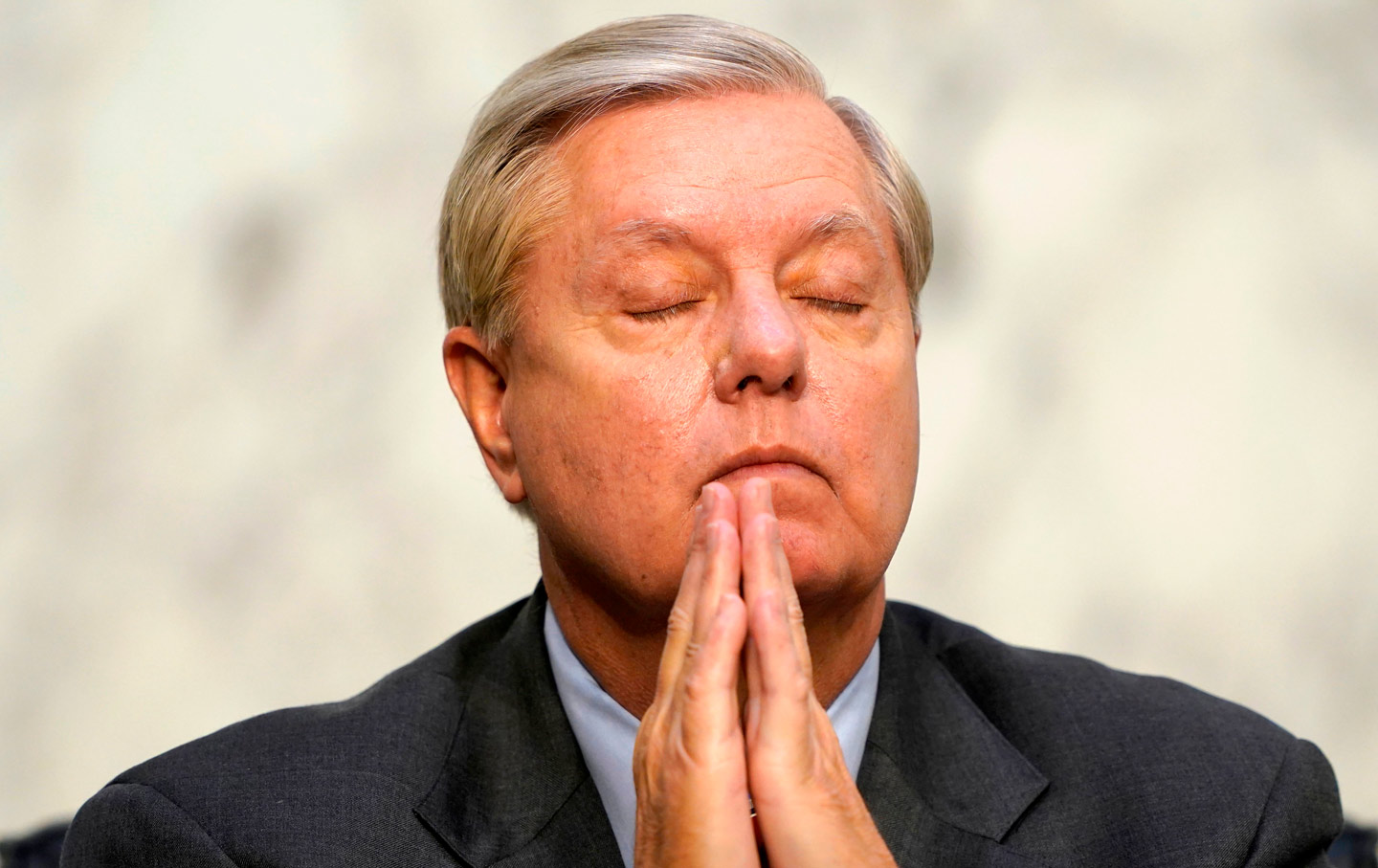 South Carolina Senator Lindsey Graham is a desperate man. So desperate that he broke the law on Wednesday by explicitly soliciting campaign donations in the halls of a federal building.

After he chaired Wednesday’s Senate Judiciary Committee hearing on the Supreme Court nomination of Judge Amy Coney Barrett, the Republican senator stepped into the hallway of the Hart Senate Office Building and made a pitch for online campaign donations. Representative Eric Swalwell, a California Democrat who is a former prosecutor, immediately noted federal laws barring such activities and declared, “This is a crime. (Lindsey Graham) committed a crime in plain sight.”

Graham’s pitch communicated just how scared he is by the prospect that he might lose the Senate seat he has treated as a personal sinecure since he replaced former segregationist presidential candidate Strom Thurmond in 2002. After coasting through election after election, Graham now faces the very real prospect that he could be beaten by former South Carolina Democratic Party chair Jaime Harrison. The Democrat, who has been tied with the Republican incumbent in recent polls, pulled narrowly ahead Thursday—47 percent to 46 percent—in a new Data for Progress survey. And The Cook Political Report recently shifted its rating for a contest Graham had been expected to win with ease to “toss-up.”

But the poll numbers are not the ones freaking out Graham. It’s the fundraising numbers. Harrison announced this week that he had taken in an eye-popping $57 million in donations during the third quarter of 2020, as compared with Graham’s $28 million.

Graham is obsessing about the money race. Last month, in an appearance with Sean Hannity on Fox News, he made an explicit appeal for donations, warning, “I’m getting overwhelmed. Help me. They’re killing me money wise. Help me.” During Tuesday’s session of the Senate Judiciary Committee confirmation hearing for Supreme Court nominee Amy Coney Barrett, Graham, the committee’s chair, made the unusual move of mentioning his reelection contest several times and, at one point, mused about the fundraising numbers. “I’d like to know where the hell it’s coming from,” he said, apparently in reference to Harrison’s haul.

Then, on Wednesday, after the hearing finished, Graham stepped across the line when he responded to a question from a reporter about his race.

Revealing the Republican political strategy for ramming through the Barrett confirmation ahead of the November 3 election, the senator said, “I think people in South Carolina are excited about Judge Barrett.”

But he didn’t stop there. Graham added, “I don’t know how much it affected fundraising today, but if you want to help me close the gap, lindseygraham.com. A little bit goes a long way. The bottom line is my opponent raised $57 million. Congratulations to him. That’s the most anybody’s ever raised in the history of the Senate. I raised $28 million, the most any Republican has ever raised. I think the contest in South Carolina has taken on sort of a national profile.”

That pitch, targeted at television viewers nationally, with its explicit mention of his campaign’s web address, led veteran election lawyer Marc Elias to declare, “Senator Graham might need a lawyer.” Elias highlighted the text of the section of the Code of Laws of the United States of America dealing with the solicitation of campaign funds inside federal buildings, 18 USC 607, which plainly states:

It shall be unlawful for an individual who is an officer or employee of the Federal Government, including the President, Vice President, and Members of Congress, to solicit or receive a donation of money or other thing of value in connection with a Federal, State, or local election, while in any room or building occupied in the discharge of official duties by an officer or employee of the United States, from any person.

South Carolina media outlets also noted that the US Senate Select Committee on Ethics says, “Senate Members and staff may not receive or solicit campaign contributions in any federal building.”

Graham’s campaign scrambled to explain the solicitation, but didn’t do well. Spokesman Kevin Bishop responded to a local TV station in Charleston, ABC News 4, with a bizarre statement that seemed to acknowledge how bad the C-SPAN video looked: “Senator Graham was responding to reporters’ questions about his campaign and fundraising. Confident any reasonable person can see that any violation—if one even occurred—was unintentional and does not represent a pattern of behavior.”

The “ignorance of the law” excuse didn’t cut it with the South Carolina Democratic Party, whose communications director Lauren Brown said, “After 25 years in Washington, Senator Graham should know better than to spend his time campaigning in the halls of Congress. This profile in desperate and unethical behavior is unbecoming of a US senator—and it is yet another demonstration of why Senator Graham’s time in Congress is coming to an end.”

Explainer: who is Roger Stone and why he would not face prison?

Pennies for the title of the Cov call with House Democrats