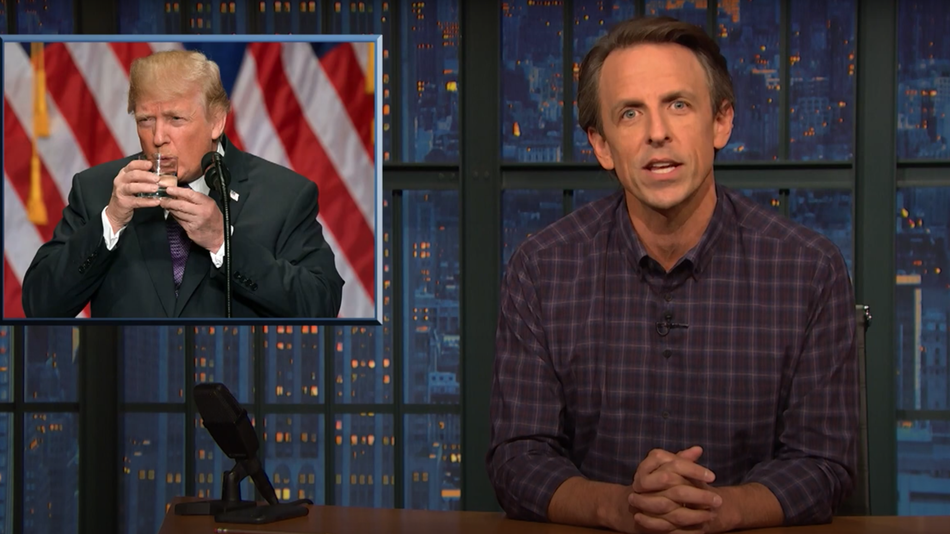 And while Donald Trump spent his last hours on the campaign trail trashing random celebrities, late night show hosts took time to reflect on the last four years — in particular, the many lies, abuses of power, and scandals that have characterized the president’s time in office.

On Late Night, Seth Meyers rounded off his monologue (jump to 14:55 in the video below) with a fast rundown of America’s present under Trump’s leadership, and the many lowlights of his time in the White House. “Trump can’t run on reality so he has to run against it, because the reality is that after four years of serial cruelties, absurdities, lies, and abuses of power, he’s left the nation in ruins,” Meyers said, before launching into one staggering list.

“Half a million new COVID cases in just one week, hospital ICUs filling up, 8 million new people in poverty, a quarter of all households struggling with food insecurity, tens of millions facing eviction and homelessness, wildfires supercharged by climate change, civil unrest over systemic racism, protesters brutalized by police, federal agents tear-gassing protesters and snatching them in unmarked cars, armed right-wing gunmen patrolling the streets, migrant families ripped apart, children who are still missing their parents to this day, a postal service near collapse, weird handshakes and flag hugs, umbrella ditching and dance moves where he looks like a tortoise flipped on its back, and a president so soulless and corrupt he’s fought with Gold Star families, called war heroes ‘losers,’ been impeached, had multiple lawyers, aides, and campaign chairmen indicted, faced at least 26 allegations of sexual assault, obstructed justice, broke election laws by paying hush money to a porn star, extorted a foreign country, had his charity dissolved, tax returns subpoenaed, had a secret Chinese bank account while he was president, paid $750 in taxes, and bilked taxpayers out of $8 million including $3 for a glass of water,” said Meyers.

“And on top of everything else, he forgot the words to the national anthem and ‘God Bless America.'”

On The Late Late Show, meanwhile, James Corden opted for a rap (a format he’s used in the past) to summarise the key moments since Trump’s election in 2016 in three minutes.

“Tomorrow is Election Day, and I think it’s safe to say it’s been a very, very, very long four years,” Corden said. “So long, in fact, that you may have lost track of everything that’s happened during the Trump administration. So in case you need a quick refresher on Donald Trump’s presidency, let me break it down for you real quick.”

Lastly, The Daily Show capped off a series of videos it’s been running in recent weeks, rounding up the “most tremendous” scandals of Trump’s presidency — from interfering with the U.S. Postal Service to the ways Trump has cashed in on his time in office.

If you want to keep up to date with the results on Election Day as they roll in, here’s how to follow along online.

‘Are we great again yet?’ Stephen Colbert slams Republicans over Capitol mob in furious monologue