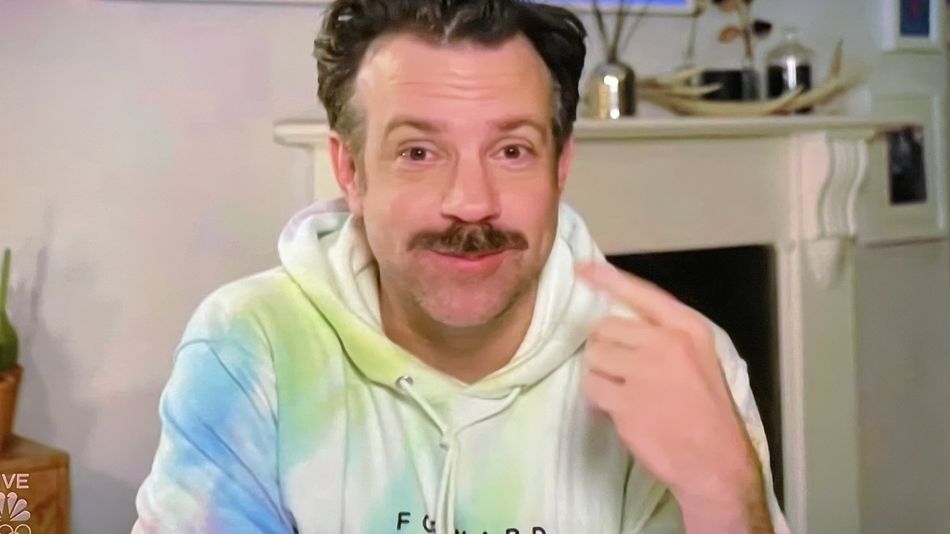 As fun as it was to see beautiful famous people all dressed up for a very expensive Zoom meeting, there was no perfectly pandemic-era awards show moment quite like Jason Sudeikis and his tie-dye hoodie.

While a couple of celebs copped to making some concessions to not being on the red carpet — Best Actor in a Limited Series winner John Boyega shouted out the “trackie bottoms” (i.e. sweatpants) he paired with his white dinner jacket — several nominees showed up to their video links in regular clothes. Jeff Daniels, Bill Murray, Chloe Zhao, Jodie Foster (in fabulous silk pyjamas) and Sudeikis all opted for comfort, and we respect them for it.

But because he won — and almost certainly didn’t expect to — Sudeikis and his (sold out) tie dye hoodie got a moment in the spotlight, and the internet loved him for it.

jason sudeikis being completely thrown off by winning , i literally love this man so fcking much 🥺 pic.twitter.com/Qw8MffT9IO

Clearly surprised to beat out Don Cheadle, Eugene Levy, Ramy Youssef, and Nicholas Hoult for Best Performance by an Actor in a Television Series – Musical or Comedy, Sudeikis pulled himself together, sort of, and mustered a shocked speech that included his son Otis, Leo Tolstoy, and a jumbled collection of philosophical conundrums.

a super high jason sudeikis saying “who is the person you’re with?” just shook me to my core

His fellow nominees enjoyed his rambling enormously, with his Kansas City bro Cheadle giving him a gleeful “wrap it up” gesture and Youssef just enjoying the show.

The Golden Globes are absolute chaos and it’s never been better. Never do it in person again. Jason sudeikis just won a golden globe in a hoodie and got openly heckled by don cheadle.

The actor’s recent breakup, and his ex Olivia Wilde’s new relationship with Harry Styles, featured heavily in the speculation about where the actor’s head might currently be at

(It’s worth noting that Sudeikis is reportedly in a bubble in London with his family, including Wilde, and it was 2:30 a.m. there when he was called on for his acceptance speech.)

Ted Lasso, the show, and Ted Lasso, the character created and played by Sudeikis, have been a wholesome, life-affirming bright spot in this pandemic year. Here’s hoping this iconic moment portends a chill and positive year for Coach.

Everything coming to Hulu in January 2021