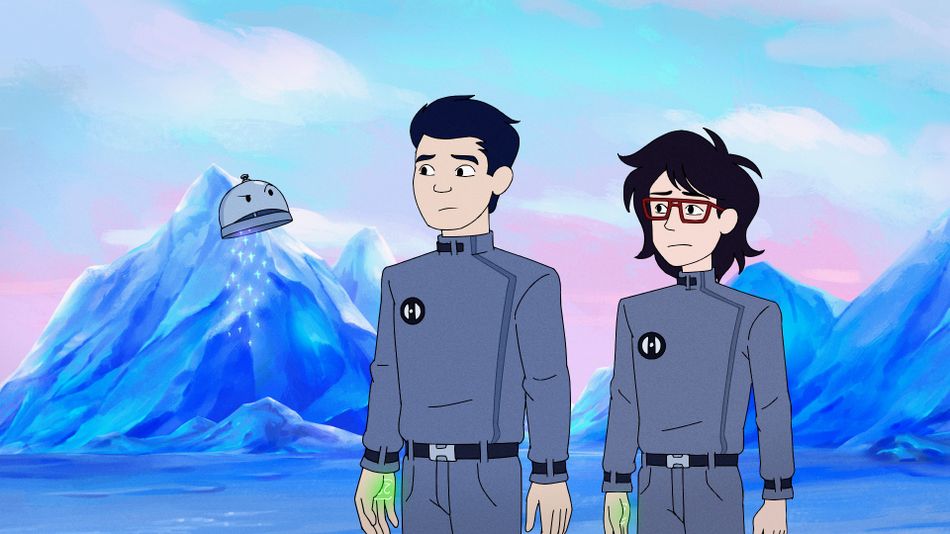 The worst thing about Infinity Train’s fourth final season is that it is the show’s last.

Infinity Train is ingeniously inventive, a total creative wonderland. After all, where else will viewers find art galleries haunted by shadowy hands or clubs in space guarded by daunting astronaut bouncers? That this show comes to the end of the line now, while still so fresh and impactful, is a complete shame.

However, part of the beauty of Infinity Train has always been its conciseness. The animated series takes on an anthology format. Each season follows a different passenger on the titular train, where each car holds a new world. Passengers are assigned a glowing green number that goes down as they learn more lessons and work to resolve the problems in their life. When their numbers reach zero, they can exit the train. Each season is only 10 episodes long, and at 11 minutes each they pack in an astounding amount of character development and heart.

This is no less true for Season 4, titled Duet, which centers on the complex relationship between best friends Ryan Akagi (Sekai Murashige) and Min-Gi Park (Johnny Young). Ryan and Min-Gi are inseparable. They’ve been making music together from a young age and dream of becoming famous one day. But it’s clear that they’re still very different people: where Ryan is outgoing and ready to dive right into the future, Min-Gi is more reserved and wants to take a safer path. Unsurprisingly, the two fall out and pick up the pieces of their lives in a brilliantly animated split-screen sequence. When they next reunite, they find themselves onboard the Infinity Train, where their journey to reconcile begins in earnest.

Ryan and Min-Gi’s joint presence on the train is unusual (even more unusual than a never-ending train in its own pocket of reality) because there has never been an instance when multiple passengers boarded together. Their numbers appear to be linked, which means that they have to mend the rift between them in order to get off the train.

Luckily, they won’t have to deal with the unfamiliar world of the train alone. Joining Ryan and Min-Gi is Kez (Minty Lewis), a sentient concierge bell who floats, cracks jokes, and trails glitter. Kez is not without her own problems. She’s ticked off everyone she’s met in every car she’s entered, which is bad news for Ryan and Min-Gi. They have to solve their own issues while facing down angry train denizens like insect cowboys and a gigantic pig baby (complete with bib and bonnet).

Each new train car gives Infinity Train’s team a chance to flex their creative muscles. Even after three seasons of zany worlds, the writing team manages to dream up new and exciting environments to enter. The animators then bring these places to vibrant life. From mazes to desert towns to giant, gravity-defying kitchens, this season of Infinity Train is a visual treat.

You can’t help but feel that the story of the train and its passengers just isn’t done yet. Infinity Train clearly has a lot more to offer than just four seasons.

Most importantly, these dazzling cars aren’t just static backdrops for the characters to play in. They are integral to the plot and to Ryan, Min-Gi, and Kez’s development. The challenges they face in these cars complement their journeys and force them to examine how they could be better people, and better friends to each other.

Ryan and Min-Gi’s emotional journeys aren’t linear. Infinity Train gives them room to make mistakes before figuring out why they’re on the train. Some of their backtracking can be frustrating, but it just adds to the complexity of their friendship and emphasizes their differences. Ryan has a hard time slowing down and considering Min-Gi’s feelings, while Min-Gi is following a too-rigid path and can sometimes patronize Ryan. Min-Gi is also worried about people’s expectations of him. He points out to Ryan that he’s never seen Asian boys from Canada like them in famous rock bands. As Ryan and Min-Gi allow themselves to be vulnerable and let their barriers down, Infinity Train Season 4 comes to a moving, satisfying conclusion.

Even with cameos from characters featured in previous seasons, Season 4 of Infinity Train stands on its own. Still, you can’t help but feel that the story of the train and its passengers just isn’t done yet. Infinity Train clearly has a lot more to offer than just four seasons. This show is one of a kind. It is visually stunning and unafraid to deal with darker, more mature subject matter. Its very concept means that it could keep chugging along into new, exciting territory. If Infinity Train ever returns for an encore, you can bet that I’d get back on board.

12 best book-to-streaming TV adaptations and how to watch