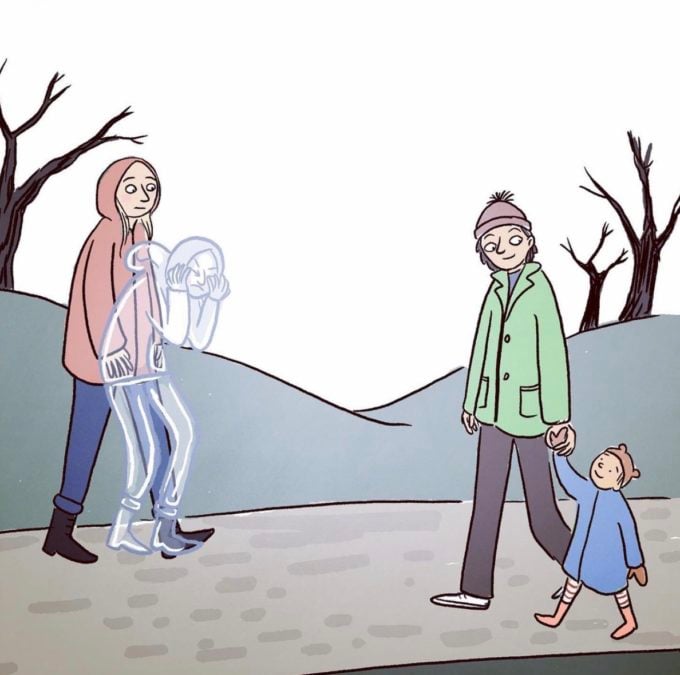 Three years ago, cartoonist, author and Cup of Jo contributor Jessica Olien and her husband, Tim, started trying to have a baby. Since then, she has undergone multiple fertility treatments, sharing her journey in moving illustrations along the way. Here is her story, in words and pictures…

I’ve always wanted children, something I’ve been clear about all along. I got married at 37, and we started trying instantly. Having a baby had always been top of mind. I’d been taking prenatal vitamins for years — hiding them from my commitment-phobic ex-boyfriends — because I wanted to be ready. But I wasn’t prepared for what came next.

Four months in, a friend of my husband’s shared that they had gone to a fertility doctor and I thought, ‘I’m coming up on 38, maybe I should go, too.’ Initially, the doctor said I was younger than a lot of his patients and that everything looked fine. But then my test came back showing that I had a very low egg reserve. It didn’t mean I couldn’t get pregnant, but it meant it would be harder. Where many people undergoing an egg retrieval might get 15 or 20 eggs, I would get two or three. We’re lucky to have very good health insurance through my husband’s work. Without that, there is no way I would have ever been able to do this.

At first, my doctor encouraged me to do IUIs (where the sperm is placed closer to the egg), but looking back, I wish I had gone straight to IVF. The first IVF retrieval was the most heartbreaking thing. I had two eggs, both fertilized. On the day I went back for the transfer, my husband got all dressed up — a detail that always breaks my heart when I think about it. As we were on our way to the doctor, we got a flurry of frantic phone calls from a number we didn’t recognize. It was my doctor saying both eggs had disintegrated.

That was a year and a half ago. Since then, I’ve switched to a doctor who specializes in people with low AMH levels, with many success stories. I’ve done banking, and had four embryos freeze at day three — never day five, as I’m too afraid they might not make it to give them that much time in the lab. I am now in my 11th round of IVF. The likelihood of it working is less than 15% per embryo. 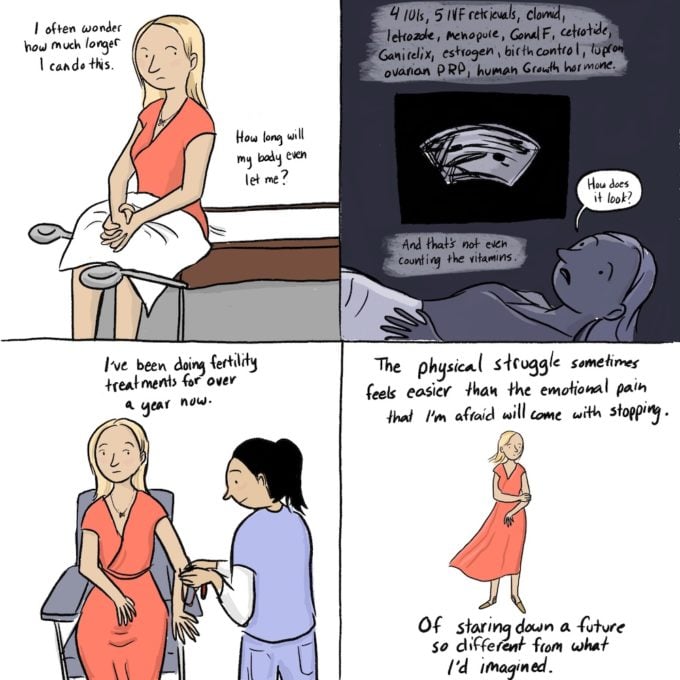 This year has been about me trying to decide what I’ll do if it doesn’t work and trying to imagine my life in different ways. Does it mean adoption? Egg donation? Being childfree and okay with that? There’s a tendency for women to try to find a solution — to be neurotic about what you eat, to focus on all the small choices you make, but at the end of the day that’s just another way of trying to punish yourself. There’s no magic bullet for any of this.

Emotionally, I’ve found that infertility is very cyclical, almost like your period is very cyclical. You feel depressed, but you don’t stay down for a long time — it comes and goes. You’re supposed to have hope. You must have hope, right? Otherwise you wouldn’t keep trying. But on a day-to-day basis, I feel pretty cynical about it, most of the time. 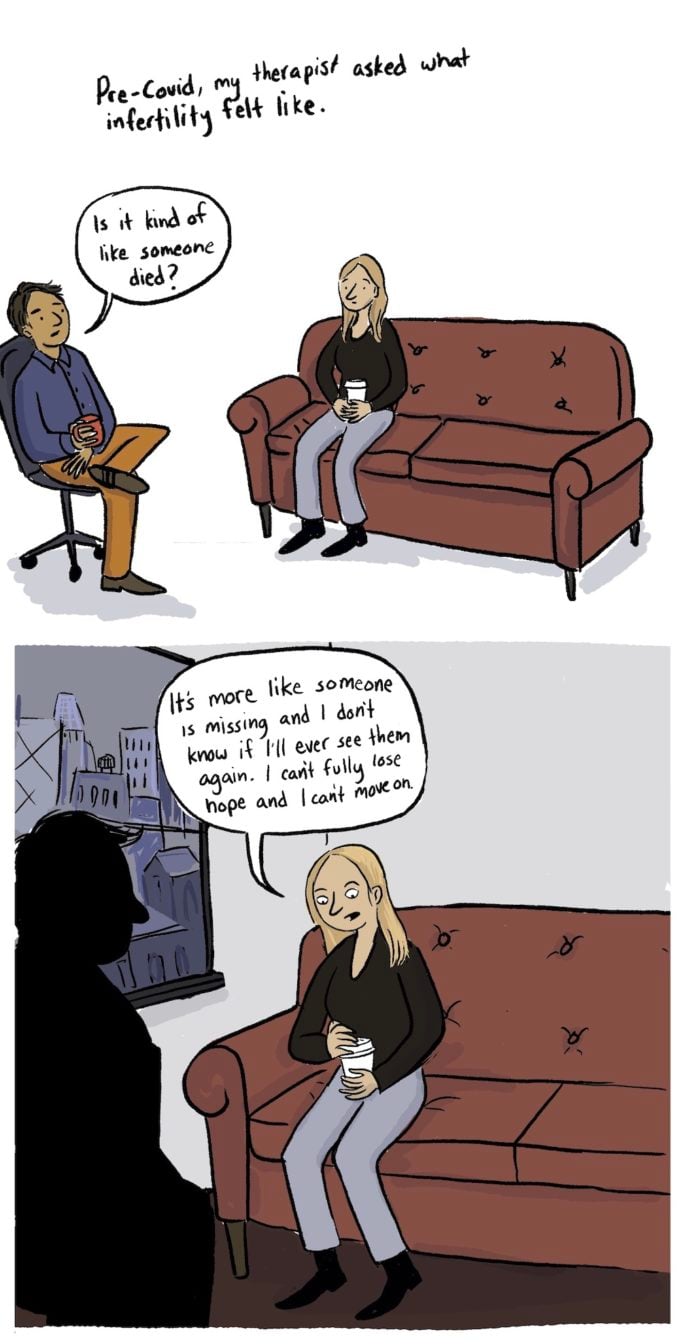 People always say, “You should have tried to have kids sooner.” But for a lot of women, circumstances don’t work out that way. Maybe they don’t meet someone they want to have a child with until later in life. It’s almost like an invisible infertility, where people who want to have kids can’t, for a variety of factors.

Infertility can be shameful for women, because it highlights how so much of our society is focused on youth and motherhood. From Kim Kardashian all the way back to fertility dolls, there is such an emphasis on age and beauty and fertility. When you’re trying to have a baby and can’t, you notice how much of our culture is about motherhood. It’s everywhere — in every commercial, every show — this message that the meaning of life is about having a baby. Even though that isn’t the case for everyone, there is so much pressure put on women. And if you do genuinely want that, and are struggling, you feel this tremendous amount of failure every time you’re confronted with these things.

For the most part, sharing has been very good for me. The first comic I posted was about giving myself a shot for the first time, and I think I just wanted moral support, for other people to be there with me and tell me I could do it. But as I continued to share, the same people would comment and tell their own stories. So many people feel isolated while going through this, including me. But through sharing my work, I’ve formed a true support system — I have a friend in France, who I’ve never met, but connected to on Instagram.

Before I opened up about my experience, I didn’t realize how many people have gone through the same things. Not just strangers, but also people I knew. That was really fascinating, to have people from all different facets of my life message me and tell me that they’d had trouble conceiving, they were trying, they were struggling. Often a person you’d never expect. It all comes back to how you never know what someone is going through.

There’s not really an upside to having to go through this, but it has made me more empathetic, and it’s also taught me a lot about how much people can tolerate. I went from almost fainting when I got shots to being able to give myself all sorts of injections, easily. I feel superhuman in my ability to tolerate medical procedures. 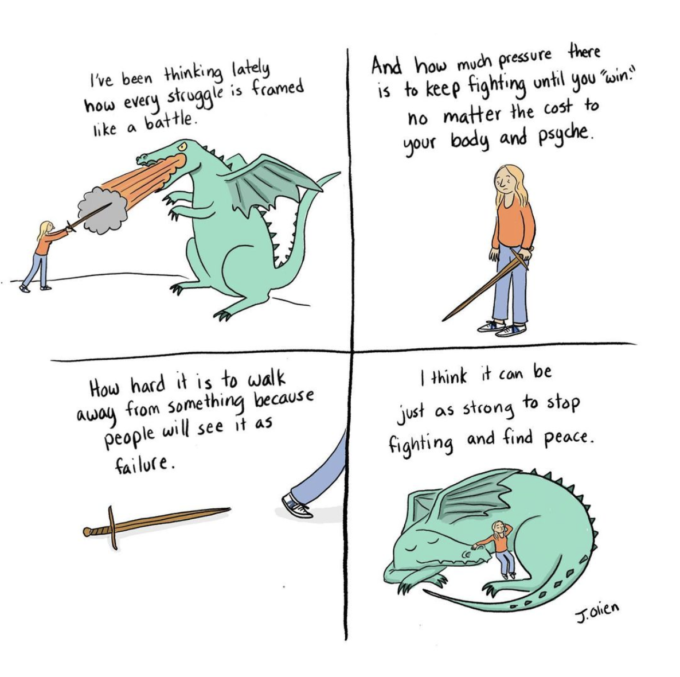 If you have a friend who is struggling, giving them space to complain about it, and listening to them, is the biggest gift. When you see someone going through a long, monotonous struggle, it can be hard not to say something to try to make it better, but it’s okay to just be there. Telling people “it’ll work for you” or “stay positive,” though well intentioned, can feel shitty. Sometimes, you have to expel all your negative energy in order to move forward.

Connecting with people who understand, and being there for each other, has been really great. Infertility takes over your life, mentally and physically. You’re constantly getting up early in the morning, getting your blood drawn, getting ultrasounds. Sometimes, I would imagine this army of other women, emerging from the subways and converging to do the same thing all over the city — because I knew they were out there, too. When people share a similar story, it helps you feel like you exist outside of this isolated space. Even when it may feel that way, you aren’t alone.

Thank you so much, Jessica, for sharing your story. We love you.

Jessica’s comics have been featured in publications including The New Yorker, The New York Times, The Washington Post and Cup of Jo. She lives in Brooklyn with her husband and their cats. You can see more of her comics here and find her on Instagram @jessicaolien.

P.S. More posts about infertility, including how to help a friend facing infertility and three women share their miscarriage stories.

When the small things are everything to me

Your guide to the best water filter for your budget

How to Talk to Your Child About Drugs and Alcohol